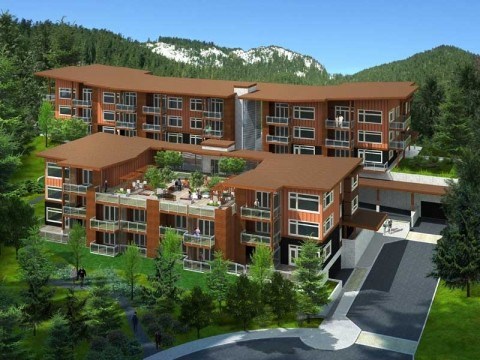 Balking at the price of a new seniors housing complex at Rainbow, council has now decided to take on the project itself.

Its last minute decision, made in a closed-door meeting last week, flies in the face of not only municipal staff's recommendations but also against support from the Mature Action Committee (MAC), which has long been lobbying for seniors housing in Whistler.

"I was surprised and disappointed, no question about it, because we have been working on this project for a long time," said MAC president Gord Leidal.

"We thought it was a great project."

The project, called The Woods, was slated for the heart of the new Rainbow subdivision.

Developer Rod Nadeau proposed a two-building project on Lots 10 and 11 that would mix both price-restricted and market seniors housing together.

The design was done in consultation with MAC members over the course of a year and a half.

The average price for a restricted unit in the apartment buildings was $370 per square foot.

"We rejected that pricing," said Chris Quinlan, speaking on behalf of council.

"That product wasn't something that will allow us to achieve our goal of the housing authority and that is that we want people to be able to transition through their entire time in Whistler inside of WHA (Whistler Housing Authority) inventory."

He explained that while some seniors may be able to sell market lots and buy a seniors' home at $370 per square foot, those moving through price- restricted WHA product would have difficulty buying in at a price that high.

"I think the majority of the people on MAC that are willing to purchase at that level are able to cash out of the place that they've had for 20 or 30 years. And what we're really looking towards is the future," said Quinlan.

But developer Rod Nadeau takes issue with that comparison, saying that the athletes' village wasn't just built on free serviced land but had other subsidies too. Specifically, there were contributions from Olympic organizers and the municipality totaling about $45 million. As well, more than $30 million from the sale of market lots and townhouses will subsidize the employee housing.

Rainbow, by comparison, was given residential zoning as part of its development approval to help subsidize the cost of developing the mainly employee housing subdivision.

"We're building for about the same price as the athletes' village was being built at we just didn't have a $100 square foot subsidy from VANOC (the Vancouver Organizing Committee for the 2010 Winter Games) and the municipality through the taxpayers," said Nadeau.

Joe Redmond, president of the Whistler Development Corp., which built the athletes' village, confirmed that the $260 per square foot price was the amount that the units were sold for and not the true value of the construction. And while the financial contributions largely paid to service the athletes' village site, the market housing will subsidize the cost of the employee housing, allowing the municipality to sell the development at the $250 per square foot cost.

Rainbow's design also includes concrete underground parking, which adds significantly to the cost of construction. That component was included after consultation with MAC members.

"Underground parking is an absolute must for most seniors," said Leidal.

As per the Rainbow agreement, the municipality had the right to purchase Lot 10 of the seniors housing component for $10, which it exercised last week.

It remains to be seen how much the municipality can build a price-restricted seniors complex for on Lot 10. It is now exploring its options through the WHA.

Two years ago Redmond built a four-storey basic apartment building at the athletes' village for $260 per square foot. That did not include underground parking.

"That's going to be the minimum price that they're going to build that building for without underground parking," he said.

Nadeau said he was surprised by council's decision, not only because it came after he already had the development permit for the project but also because he followed the criteria set out in the housing agreement with the municipality. That agreement outlined the hard and soft costs of the project plus a 7.5 per cent overhead.

That's exactly what he said he did.

"They changed the game at the 11 th hour," said the Rainbow developer.

"And they allowed us to continue down this road for a year and a half."

He estimates he has spent a couple of hundred thousand dollars on designing and developing the project thus far.

"I know that members of council have the very best of intentions, as they hope to find alternative ways to deliver some less expensive housing on Lot 10," said Leidal. "I wish them success, and we at MAC look forward to being part of that process. In the meantime I understand that the Innovation Building Group is prepared to proceed with the remainder of the development on Lot 11, and it is my hope that this project will also reach a successful conclusion."