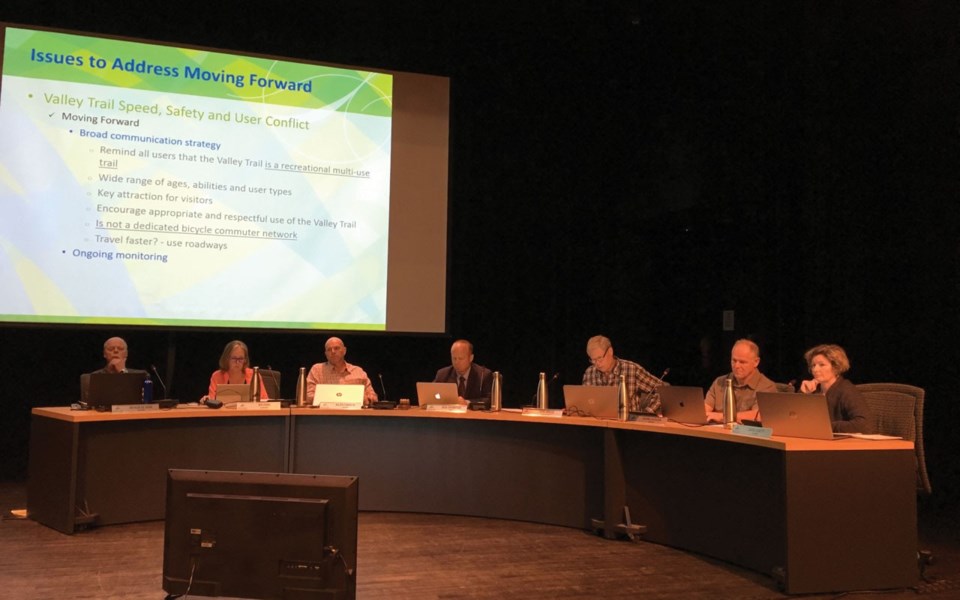 Whistler mayor and council hear a presentation on e-bikes at the July 9 council meeting. photo by braden dupuis

After months of consultation with key stakeholders, Whistler council opted to support a draft policy concerning "e-mobility devices" (or e-bikes) at its July 9 meeting.

The policy will permit Class 1 e-bikes (pedal-assisted motors, top speed of 32 kilometres an hour) on the Valley Trail network and most, but not all, off-road, non-motorized recreational trails.

Class 1 e-bikes will not be allowed on hiking-only trails, all recreational, non-motorized trails above the Flank Trail on Sproatt and Rainbow mountains, and within the Emerald Forest (other than the access road connecting Lorimer Road and Alta Lake Road).

Class 2 (full-throttle bike, no human effort required) and Class 3 (similar to Class 1, but with a higher top speed) devices are considered motor vehicles by "senior legislation," including the Motor Vehicles Act, according to a staff report to council, and are therefore deemed not appropriate or safe for use on any recreational non-motorized trails on Crown lands.

Class 2 and 3 e-bikes are allowed on motorized trails (none of which exist in Whistler) and resource roads, as well as on municipal and provincial roads and highways.

Other "e-mobility devices" like low-speed motorcycles, powered skateboards, stand-up scooters, segways and hoverboards are also classified as motorized vehicles by provincial legislation, and are also not allowed on the Valley Trail or other non-motorized rec trails.

The policy was built within the framework of the provincial Motor Vehicle Act, ICBC regulations, the Off-Road Vehicle Act and the Wildlife Act, but perhaps most importantly a similar policy from Recreation Sites and Trails BC (RSTBC), said manager of resort parks planning Martin Pardoe, in a presentation to council.

"Their new e-bike policy, which came out in April 2019, that's very relevant because it has jurisdiction on many of Whistler's trails," he said.

"Consistency with these documents is good from a legal perspective, but it also makes it easier for everyone to understand and to best achieve success."

"It is being adopted by governments, cycling advocates and industries across North America, and RSTB has also recognized they're likely to see some legal challenges to their policy, which they welcome, because it can help better define things and advance the whole e-bike agenda," he said.

"So there's lots of things that are moving in this. We know that e-bike technology is going to change, new devices are going to appear at any time. Use patterns, policies and legislation will all continue to evolve."

Municipal staff is proposing to monitor e-bike use over the next two years to understand changes, trends and issues, with an eye to re-evaluating or adapting the proposed policy where necessary.

Councillor Ralph Forsyth, council's rep on the Recreation and Leisure Advisory Committee (RLAC), said he was originally of the mind that e-bikes should be free to go where they want, until he heard from the public.

"I'm comfortable with the policy, as is RLAC," he said.

"I think it's not so prescriptive that we can adjust as we need."

With bylaw operating on a complaints basis, and the different classes of e-bikes hard to tell apart at a glance, enforcement will be difficult, noted Coun. Cathy Jewett.

"In my winter time work dealing with enforcement of slow zones with skiers (as a patroller with Whistler Blackcomb), I know how important the education portion is, as well as signage," she said.

"So it's also another really important part of our plan, to have those education pieces ... Hopefully people will get the message."

Find the full draft policy, along with more e-bike info, at www.whistler.ca/ebikes.