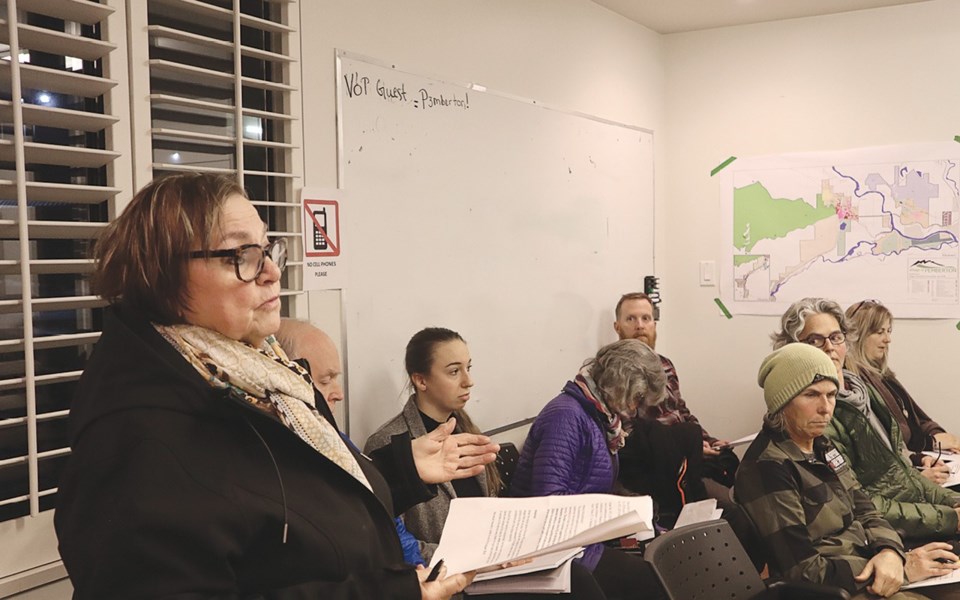 The rezoning requires two amendments—to the VOP's official community plan and a zoning bylaw—that would allow the Sea to Sky School District 48 to subdivide the lot and create a new single-family residential lot on the corner of Poplar and Aster streets.

The district is hoping to operate a new program out of PSS that would give students the opportunity to gain hands-on learning experience in multiple trades such as design, construction and landscaping, prior to being involved in the sale, marketing and staging of the new home.

But according to Fran Cuthbert—who lives directly beside the proposed property—the school district has offered conflicting information about the project from the start.

"The school district is being contradictory with their statements," she said during a public hearing held during a break in the Dec. 10 regular council meeting.

Cuthbert also raised concerns about where the proceeds from a sale would go. "Will they stay in the school district for further educational opportunities, or do the funds go to the Ministry of Education?" she asked.

Following Cuthbert's remarks, council debated the merits of the plan, with Councillors Leah Noble and Ryan Zant expressing a desire to see the project be retained as housing for PSS teachers (known as a teacherage), rather than be sold on the private market.

(The district has not indicated which route it would like to take. But by going through the rezoning process, it has the option to sell on the private market.)

Coun. Amica Antonelli said she would like to see a more-detailed rendering of the project and "more detail on what the educational benefits would be" of the project.

Coun. Ted Craddock spoke in favour of the subdivision, saying, "So, are we going to miss out an opportunity for an infill lot and more housing over the fact that we want to say that it has to be a teacherage?"

In the end, Zant, Noble and Antonelli supported the redevelopment along with Craddock.

In his comments, VOP Mayor Mike Richman expressed frustration with the school district, saying that it had the opportunity to speak at the public hearing.

While VOP staff said two SD 48 representatives were at the public hearing, neither spoke, nor did they stay for the subsequent vote.

Following the vote, Cuthbert said she felt that VOP staff had unfairly "guided" council's decision on the matter.

Editor's note:This article has been updated to clarify the nature of the amendments that received third reading, and note that Antonelli voted for the amendments, not against.

Council also heard from a delegation from BC Transit during the regular council meeting.

With two routes within Pemberton, Ringma said that at 83,000 users a year ridership is quite strong in the community. He added that total operating cost recovery (essentially what people contribute to the fare box) is "very respectable" as well.

Mayor Richman said he has heard of instances where commuters were left stranded due to staffing issues.

"In the short term, is there any discussion in terms of how we could pull drivers from Whistler so that we don't ever have that loss of service?" he asked.

In his response, Ringma said staffing is the responsibility of the contractor operating the service, Whistler Transit.

"I can tell you that in our service provider operating agreements, it the local operating company's responsibility to not miss service," he said. "That is quite stipulated, even if it comes at an impact to their bottom line. They are contractually obligated to provide that service. So I will have that conversation with them."

The application is to the Union of BC Municipality's Community Emergency Preparedness Fund, Indigenous Cultural Safety & Cultural Safety and Cultural Humility Training Program for up to $25,000 for the purpose of providing "essential cultural competency training" for the team.