Council tells cell tower opponents to get community behind them 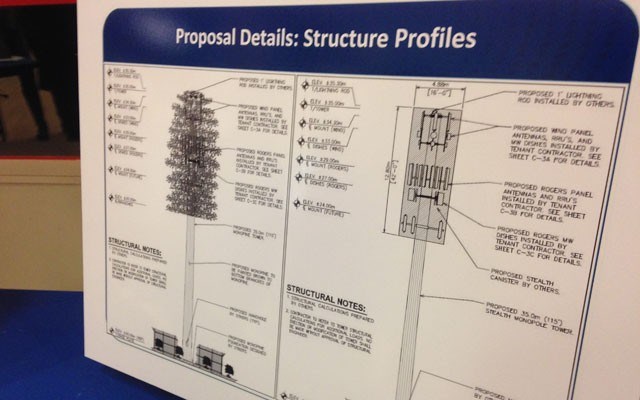 Mono Pine A mock-up of SBA Communication's proposed cell tower, designed to look like a 35-metre tree, at the open house held at Myrtle Philip on Dec. 10. Photo by Braden Dupuis

Don't make the proposed 35-metre cell tower at the entrance to the village an issue just for the neighbours within in the surrounding area; instead, rally the entire community.

That was Mayor Nancy Wilhelm-Morden's advice to resident Stan Kranjc who asked council several questions to kick off its first meeting of business since the election.

Kranjc is fighting to stop the erection of the huge cell tower on Lorimer Road near the entrance to the Whistler Cay neighbourhood.

Among his questions was a request for the addresses on the tax roll immediately adjacent to the proposed cell tower in an effort to rally neighbours. He was told the mailing list information could not be shared.

But the mayor had a different take.

"Even though you have concerns, and justifiable concerns being in the immediate vicinity, I think you need to expand your horizons and reach out to the broader community," said the mayor, explaining that any objections from the neighbours will be seen as simply NIMBYism (Not In My Back Yard).

Among other things, Kranjc asked council if it would consider legal options as well as asking if each member of the team would express their views publicly.

"I've only heard from one of you specifically," he said.

But it's not up to the municipality if this cell tower moves ahead or not.

"I make no bones about it," said the mayor. "I'm opposed to this from a guest experience perspective.

She encouraged people once again to write to the cell tower proponent SBA, and to MP John Weston and to Industry Canada.

"The point is to convince the applicant that it's the wrong spot, more importantly perhaps to convince Industry Canada that this shouldn't go forward because they're the decision maker ultimately."

The deadline for comments has been extended to January 26.

Kari Gaudet, director of the Whistler Children's Centre, a stone's throw away from the tower site, worries that the installation is a moot point. These worries come on the heels of last Wednesday's community open house.

"The effects and unhealthy levels of RF radiation are inconsistent and controversial making it impossible for me to speak to," she said.

"What I can speak to is the unsightliness of the cell tower and the impact it will have on land use and land values in our area. The ability for our non-profit operation to be financially viable is based on membership and enrollment. Any negative effect to these fundamental issues of our society may impact our ability to provide child care services in our community."

The board of the Whistler Children's Centre has sent a letter to applicant SBA Communications stating the centre's concerns.

About 75 people attended a Dec. 10 open house on the cell tower proposal, held at Myrtle Philip School, and most were not impressed with the proponent's plans.

For more than two hours, SBA took the brunt of the community's backlash.

"We're here telling you that we don't want this tower where you want to put it," one man said, during the open house Q and A.

"Perhaps it's just convenient for you to put it there because all your hookups are there. However, I don't think you've convinced me, or most of the people in this room, that there are not any alternative locations."

To address concerns about the tower being an eyesore, SBA presented mock-ups of what they call a "mono-pine" cell tower — a concept designed to make the tower look like a tree by painting it brown and adding foliage.

Any mention of the mono pine design drew audible derision from the audience.

Some residents were concerned with information found on Industry Canada's website that says SBA would be able to increase the height of the tower by 25 per cent without any prior consultation to accommodate other cell carriers.

Others had concerns about adverse effects due to radiation, since the tower would be located next to a daycare and up the street from an elementary school.

According to SBA, there are no other locations that meet all the requirements for the tower.

"We looked at three locations for a new structure, and then we looked at co-location opportunities in the village," said Riley Brown, field sales project director for SBA Canada.

"Those don't serve the coverage requirements."

Brown said SBA must meet the right space, height and coverage requirements, as well as have a willing landowner.

Wilhelm-Morden, who attended the meeting, explained that the Resort Municipality of Whistler (RMOW) has no say in the placement of the tower.

Following the public consultation process the RMOW can issue a letter of concurrence or non-concurrence with SBA.

But, Wilhelm-Morden said, the letter would have no legal impact on SBA's decision.

"That doesn't happen. We do not have that capability.

"We identified this location as being very sensitive from a siting perspective two years ago, but here we are anyway."

The only opportunity to stop the tower from going up is to raise the issue with the federal government, she said.

Residents of the area were encouraged to submit comments to MP Weston at john.weston@parl.gc.ca or minister of industry James Moore at james.moore@parl.gc.ca.

A petition opposing the tower has been set up at change.org, and has already garnered more than 700 signatures.