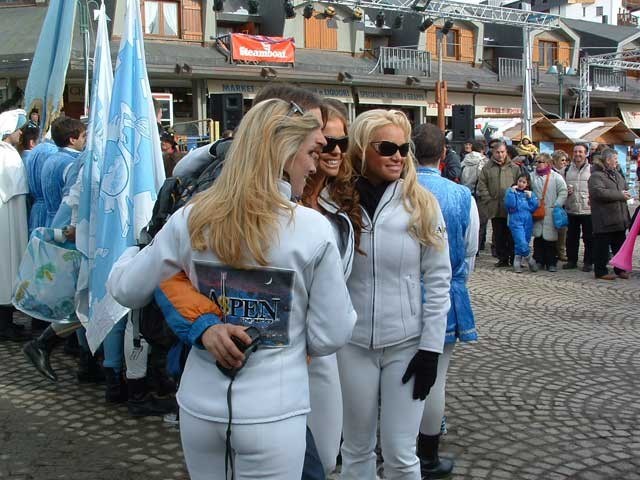 Sestriere’s Hub The main Plaza in Sestriere, Italy, during the 2006 Winter Games was a hub for many activities, including the promotion of Aspen, The TV Series, concerts and parties. No medals were handed out in the plaza.

After meeting privately with top officials from the Vancouver Organizing Committee for the 2010 Games on Tuesday, Whistler council unanimously approved the controversial temporary commercial use permit (TCUP) bylaw.

Most councillors called the two-hour meeting with John Furlong and Terry Wright "enlightening" and said they are now comfortable forging ahead with the significant Olympic bylaw.

"Had we had that information two or three weeks ago, I think our view of what was going to transpire with respect to TCUPs would be different," said councillor Tom Thomson.

Added councillor Chris Quinlan: "They certainly alleviated any of my concerns.

"We have some commitments that will be followed through on from VANOC, and there is a high degree of comfort that those will be met."

While the details of the closed-door meeting are cloudy, VANOC CEO Furlong and Wright, executive vice president of services and operations, likely shared more details about Celebration Plaza and the medals ceremonies. Mayor Ken Melamed said no decisions were made.

"We got into speaking about business planning," said the mayor.

"VANOC staff shared some information that they prefer to keep confidential... There are some operational initiatives that were really more around the challenges of hosting the Games that are not resolved and therefore are premature to release."

Council's sentiment on Tuesday differed drastically from their position in late December. At that time, lawmakers stalled third reading of the TCUP bylaw partly to send a message to VANOC that they were unhappy the medals ceremonies were being moved from Celebration Plaza to the sports venues to save money.

VANOC officials have since told council they are prepared to work with the municipality to deliver alternative nighttime programming at the space on Lot 1/9, adjacent to Marketplace.

It not clear whether VANOC still plans to contribute their proposed $10 million towards the $20 million Olympic parties planned for Celebration Plaza.

"What I can say is the $13.7 million budget for the construction is secure," said Melamed when asked about the funding.

"When we realize the details of the modified Celebration Plaza program, we will find out what contributions may be forthcoming from VANOC."

The mayor added specifics of the "modified" nighttime festivals are still being hammered out, like what the entertainment will be, how long each program will run for, which athletes will come, and whether there will be ticketing and fencing.

The mayor added that the reason the meeting with Furlong and Wright was closed to the public was because it was a "legal" matter.

Furlong did not speak at the public council meeting held later Tuesday. He also did not speak to the local press, despite requests. And no representatives from VANOC were available for comment.

Now that the TCUP bylaw has received third reading, VANOC can begin working to secure the 411 bedrooms it needs for Olympic media by February. The organization also requires another 906 bedrooms in the corridor for essential workers. Some of those beds will come from the Whistler Workforce Housing Project currently underway. (See related story for details.)

TCUPs can be used to provide accommodation for Olympic workers and volunteers until the summer of 2010. They also allow VANOC to set up temporary structures, including stores and food-outlets, at five spots in Whistler: Celebration Plaza, Franz's Trail/alpine venue, the athletes' village, the sliding centre venue and the conference centre, which will become the main media hub.

But with the medal ceremonies scrapped from Celebration Plaza's agenda, Councillor Eckhard Zeidler has asked the municipality to review its development of the Lot 1/9 site. His motion will be brought forward at the next council meeting, on Feb. 3.

"We need to review whether the current plans are appropriate or whether they should be scaled back," said Zeidler.

"There is an opportunity to possibly make this thing even better and to maybe even save some money without jeopardizing the financial contribution from VANOC and from Heritage Canada."

Meanwhile, council also gave first, second and third reading to a sister bylaw that dictates which TCUP applications council will approve and which ones senior staff can OK.

Some of the TCUPs that general managers can approve are for food/beverage and retail kiosks up to 150 square metres, or just less than half of a high school basketball court.

Quinlan, who also is head of the restaurant association and owns Quinny's Cafe, said he is not concerned by this delegation.

"The original concern was that people were going to set up massive restaurants and that would take business away from existing restaurants," said Quinlan.

"Those concerns were addressed in two ways. First, is that a maximum of 150 square metres is about the size of Quinny's (Café). Number two is the fact that they are inside the venues. Anything in the venue is not something that is going to take away from existing restaurants."

Quinlan added he is not worried about food kiosks going on Celebration Plaza because the restaurants and cafes around Lot 1/9 are "doing things that can't be duplicated" in a 150 square metre space.