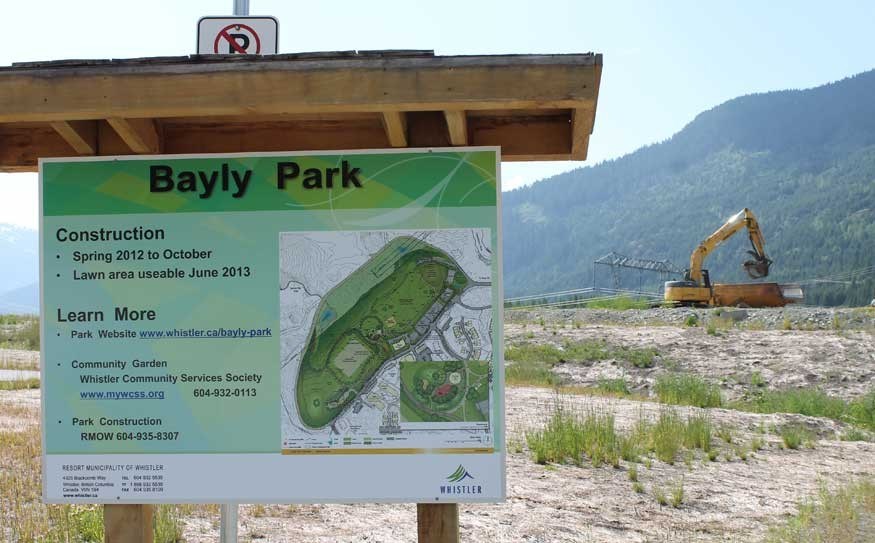 PARK PLACE The new Recreation and Leisure Advisory Committee would weigh in on projects like the new Bayly Park at Cheakamus Crossing, currently under construction.

It's been more than 10 years now since the Advisory Parks and Recreation Commission was disbanded, under the rationale that the group was no longer necessary. There were always members of the public that disagreed, however, and lobbied over the years for the return of the committee, where members of the public involved in sports and recreation could provide input to the municipality on things like parks, user fees, scheduling and more.

One of the more outspoken community members advocating for the return of the committee is Andrée Janyk, an advocate for youth soccer in Whistler who was elected to the Resort Municipality of Whistler council in 2011. One of her campaign promises was to revive the committee, and, with the support of other council members, that's a promise that's been kept.

Back in the spring, municipal staff put out the terms of reference for what will be called the Recreation and Leisure Advisory Committee, and a community-wide call for resumes went out. The deadline passed on July 31, and at the upcoming council meeting on Aug. 21 council will select seven members of the community to serve, as well as a non-voting member of council and municipal staff to work with the group.

Committee terms are one year. The members should represent the areas of youth/aging populations, Whistler families, the environment, accessibility, outdoor recreation, indoor recreation, arts and history, Tourism Whistler and Howe Sound School District No. 48 (or a designated member of the District Parent Advisory Committee (DPAC).

Janyk has not been selected to represent council on the group, but said: "(I will) definitely put my name forward." She also expects the group to start meeting soon, either in September or October.

As well as providing a sounding board for recreation policies, Janyk said the group would be able to bring forward issues and suggestions. "The committee doesn't have power, ultimately that power still resides with council, but they do have the ability to advise and suggest directions," she said.

Janyk said the group would likely pick up where it left off in terms of the types of issues it would have to deal with.

"For example, if there's a proposal to up the fees at Meadow Park, as part of the review process the item would come to the committee to vet it, to see if it's appropriate, to fine-tune it, to offer suggestions how to adjust it based on their knowledge of the wishes of the community — that's something the committee would do and that we've done in the past," said Janyk.

That example does hit close to home, as the RMOW has said it will consider changing the fee structure at Meadow Park that could see non-residents pay more. That's after the Squamish-Lillooet Regional District declined a request to assist with operating costs of Meadow Park based on the number of residents from Pemberton and Area C using the pool, arena and other facilities.

The decision to add the word "leisure" to the committee also made sense this time around as the group will be working with the municipality on things like hiking and biking trail development, and other activities that don't necessarily fall under sport or recreation.

"For example, one thing we might need to look at is adding gentler hiking trails for visitors, or assessing our need for gentler trails because hiking up Rainbow is pretty ambitious for a lot of people — but maybe there's a need for more trails like around Cheakamus Lake," said Janyk.

Janyk hasn't received much feedback yet, but generally the idea of the committee has been well received.

"Certainly for some of the sport groups like soccer and others I've spoken to, my sense is that people are happy to have the committee back in place, and that it's a good starting point and a good opportunity to put ideas forward," she said.

"There's also a sense that this will take the burden off the staff, too, because things can be discussed at the community level first and (the committee) can talk to people before bringing things up at council."