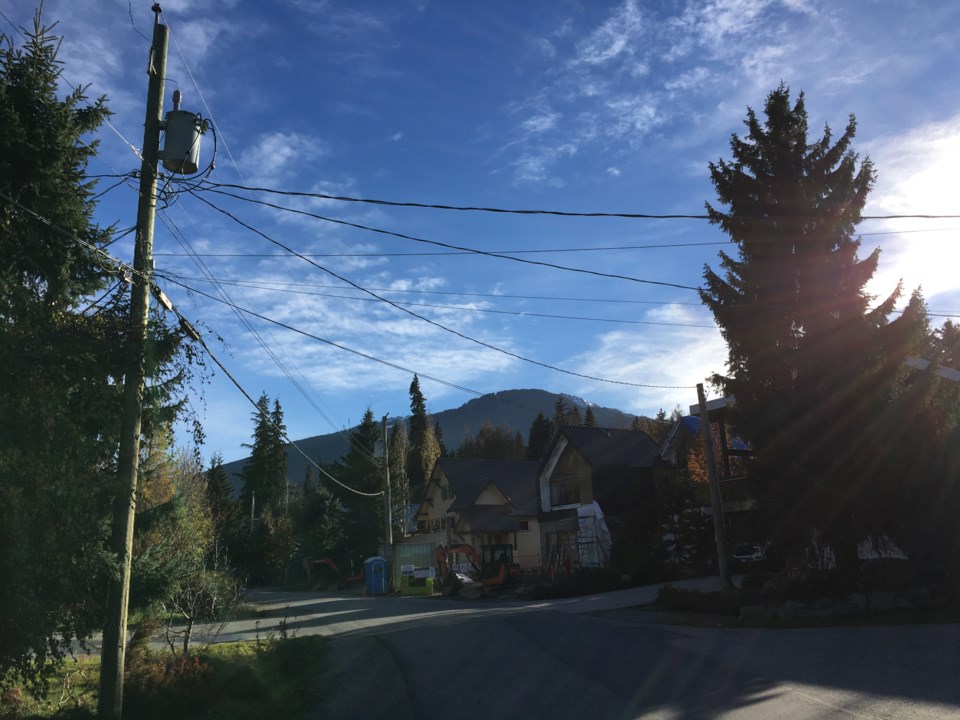 A resident-initiated project to bury the utility lines in Whistler’s White Gold neighbourhood will be reconsidered at the Dec. 1 council meeting.

The issue was brought back to the table by Councillor Cathy Jewett, who originally voted in favour on Nov. 3.

Though the project was initiated by way of a formal petition from the neighbourhood, some residents have since argued the process—which required 50 per cent support representing 50 per cent of the total property value—was not fully transparent about the costs to some homeowners (see Pique, Nov. 5: “White Gold beautification gets go-ahead from council”).

Further, some said they never received an email from the Resort Municipality of Whistler (RMOW) during a four-day window last month in which the RMOW said it allowed them to rescind their support for the petition.

“Included in our package tonight are letters from people from the neighbourhood, who originally signed the petition in favour of the undergrounding, and then had a change of heart, but never received the email that others did asking them if they’d had a change of heart,” Jewett said at the Nov. 17 council meeting.

“So that’s the basis of my reconsideration, is to ensure that these people that did have a change of heart are able to register that.”

By way of an amendment to Jewett’s resolution, Coun. Duane Jackson asked for more information to be included in an appendix to the Dec. 1 council report—including the project’s timeline, and what information was provided to residents and when.

“There was some suggestion that people may have changed their mind and it has not been recorded, and from what I understand [the petition process] has been well vetted,” Jackson said.

“It would be good for the transparency of the neighbourhood.”

Couns. Ralph Forsyth and John Grills voted against the reconsideration, saying the petition followed a legislative process as set out in the Community Charter.

“We followed a process initiated by the residents,” Forsyth said.

“For the same reasons that I supported it last time, I will support it this time.”

In an email, an RMOW spokesperson clarified that the annual maximum tax increase for homeowners under the project’s proposed Local Service Area is $1,230.

And while the expected cost to individual homeowners for the undergrounding work ranges from $4,500 to $22,000, depending on the complexity of their property, “most of the homes remaining overhead are low complexity and the likelihood of a redirection of underground is expected to be low,” the spokesperson said.

“There is an overhead option for all owners, which is estimated at less than $5,000.”

While homeowners technically can’t opt out of the project, the overhead option would allow them to install a pole on their property to run a power line above ground to their home.

Mayor Jack Crompton also suggested that staff share more clarifying information about the process directly with White Gold residents, though he added that the legislative process council is dealing with is “very small.”

“The provincial government requires a petition to be signed by the residents and brought to council, and I believe our staff went above and beyond trying to communicate with residents,” Crompton said.

“There are things we’ve learned, to be sure, and we’ll apply them moving forward.”

BE COVID SAFE—FOR THE SAKE OF THE SKI SEASON

With rising cases locally and new provincial health orders limiting social interactions in place until at least Nov. 23, Mayor Jack Crompton is urging Whistlerites to be COVID safe—for the sake of the ski season.

“Now is the time to do everything we can to put brakes on COVID-19. Our community and this ski season depend on it,” Crompton said at the Nov. 17 council meeting.

“It is critically important that we follow the recommendations of our public health officials.”

That means no social gatherings outside your “core bubble” (meant to be kept as small as possible), staying in your home community, keeping two metres of distance and wearing a mask if possible.

While there has been increasing talk about mask-use in B.C. and in Whistler—including a petition calling for making them mandatory that had garnered 125 signatures as of Nov. 17—the RMOW lacks the legislative authority to institute such a ban.

“At this point, mandatory masking is a decision that will be made by Vancouver Coastal Health’s provincial health officer,” Crompton said.

“It’s been a topic of conversation in the community for a long time. We are working with public health to explore all options to ensure safety alignment within the resort.”

There’s no cost for COVID-19 tests in B.C., Crompton added, and those who think they need a test should use the self-assessment tool at bccdc.ca.

“If you have been directed to self isolate, please do it to the letter as requested, and remember, please be kind, be calm, be safe,” Crompton said, borrowing a phrase from provincial health officer Dr. Bonnie Henry.

“Those are not words that are without purpose or meaning. Dr. Henry consistently talks about the importance of kindness, and how critical it is to a strong response that’s durable over time.

“If we spend our time finding out other people who aren’t doing things exactly as we’d like them to, we lose the capacity to make the change that we’d like to see ourselves, so I really want to encourage us as a community to focus on how we can build COVID-safe practices in our own social circles.”

A report considering options for how to host in-person council meetings during the COVID-19 pandemic was deferred on Nov. 17.

Council will now consider the report at its first meeting in February.

Though staff presented three potential options (in-person at the Maury Young Arts Centre, with crowd limits, Plexiglas, mask requirements and enhanced sanitation; a hybrid in-person and virtual model; or strictly online), COVID case counts have taken a turn for the worse since council requested the report back in September.

“I think that this is an extremely unusual time in the life of our community … but British Columbia is facing some unique challenges and on Thursday (Nov. 19), our public health officer is going to make a decision about whether to extend a regional order that will impact us heavily,” Mayor Jack Crompton said at the Nov. 17 council meeting.

“So I think it’s probably the wrong time for us to make this decision.”

Council’s last in-person meeting was on March 3, and frustration with the virtual format was never more evident than during the four-hour marathon Nov. 17 meeting over Zoom, which featured a higher-than-normal volume of technical glitches.

“I think it’s ironic that we are talking about maintaining electronic meetings when, for instance, I’ve had to change computers once during this, I’ve had Zoom cut out three times, I didn’t even hear your motion pass the first time,” said Coun. Cathy Jewett.

“This just shows the pitfalls … I found tonight to be technically one of the most frustrating meetings I’ve had since COVID began.”