Numbers are still coming in for the 10th anniversary of the Crankworx Whistler mountain bike festival, but festival manager Darren Kinnaird said indications suggest that this might be the biggest and best yet from a few different perspectives.
Aug 21, 2013 9:00 PM By: Andrew Mitchell 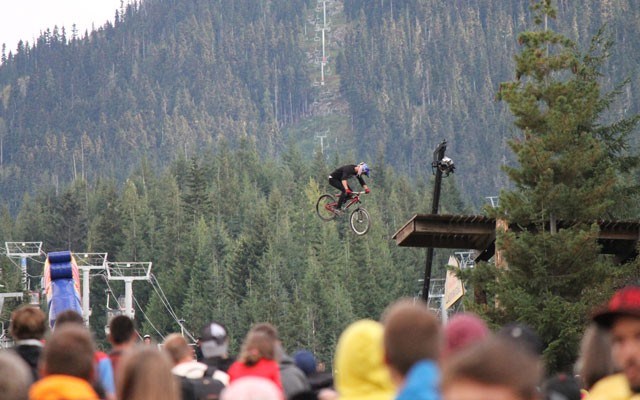 Numbers are still coming in for the 10th anniversary of the Crankworx Whistler mountain bike festival, but festival manager Darren Kinnaird said indications suggest that this might be the biggest and best yet from a few different perspectives.

"Our preparation was great this year and just to see it all come together — everyone involved is saying that it was the best Crankworx that we've all been involved in," said Kinnaird. "It was just a really smooth operation this year, relatively speaking."

Hotel numbers, spectator numbers, webcast numbers and other metrics will be confirmed over the coming weeks, but Kinnaird did have a chance to speak to the major sponsors involved.

"Most are really satisfied with the event, and they feel the same way that we do, that it was the best yet," he said.

In terms of spectators, it's estimated that 25,000 people took in the Red Bull Joyride slopestyle on Saturday, Aug. 17.

"As far as we can tell it was the largest spectator sporting event that's happened in Whistler Crankworx, or has potentially ever happened in Whistler," said Kinnaird. "Even the ticketed events for the Olympics for any given event didn't see those numbers."

Webcast numbers were also up across the board. Kinnaird didn't have final numbers, but the online viewership for Red Bull Joyride alone was up around 20 per cent.

That said, Kinnaird added that there is always room for improvement. For example, he says they've had a lot of feedback about the Ultimate Pump Track Challenge presented by RockShox, which took place in Whistler Olympic Plaza on Aug. 15. The course was built at ground level and was hard to see by anybody not in the first few rows next to the fence.

"That's one of the biggest pieces of feedback. We have to find a way to help more people to see the pumptrack," said Kinnaird. "We'd also like to find a way to make the course permanent or at least stick around through the festival so we don't have to tear it down right away. To have it used after the main event would be awesome."

The Whistler RCMP had a busy few days but there were no serious incidents and they're pleased with the festival.

"Overall we're happy with the way crowds behaved," said Staff Sergeant Steve LeClair. "Possession of open liquor was a concern, but thanks to the operational plan we had adequate resources to mitigate the risk by pouring out liquor and issuing tickets."