Crankworx hailed as a success 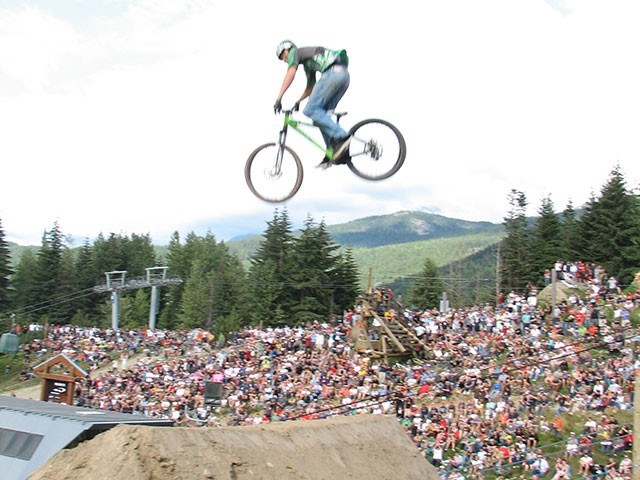 Standing Room Only Upwards of 20,000 fans turned out on Saturday night to watch the Kokanee Slopestyle finals.

While actual visitor numbers from Kokanee Crankworx won’t be released until mid-August, organizers are already calling the nine-day freeride mountain bike festival a success, with a huge international turnout of riders, a packed village, and massive crowds at Crankworx events.

One number that organizers could provide were rider numbers for the Whistler Mountain Bike Park. According to Whistler-Blackcomb, they set several park records during the festival, including their busiest day ever (2,197 riders), three consecutive days with over 2,000 riders, and the most riders in the bike park in one week (12,383). In total, 14,495 riders rode the park over nine days, the first three of which were tempered by rain.

“The event exceeded all of the partners’ expectations, as we’re obviously thrilled with the results,” said Jeremy Roche, general manager of Kokanee Crankworx. “We had a packed village, hotels that were full, and the athletes and spectators had a great time. Considering that this was a three-day event taking place over a weekend not that long ago, we’re very happy.”

“There are still a number of high-profile athletes that haven’t been here, or made their first trip to Crankworx this year. For example, two time world downhill champion Fabien Barel came to Crankworx for the first time this year, and he’s promised to come back.”

One way to get athletes out in the future will be increasing the prize purse. In total, more than $44,000 in prize money was given out for the pro categories, including almost $20,000 in the Slopestyle.

“No doubt about it, that’s something we’d like to grow,” said Roche. “Each year we’ve grown the prize money, and it’s our intention to ratchet that up further. Obviously we’re competing for riders, because there are events taking place all over the world and the athletes can pick and choose where they want to go and you need prize money to drive them here.

“That said, Whistler is a fun place, the riders really enjoy their time here and choose to stay awhile. Athletes were here before the festival, and will be here a long time after, there are (photo and video) shoots going on everywhere this week. To say it’s all about prize money would be wrong, but it definitely helps.”

According to Roche, Events Whistler partners will meet next week to discuss the festival and look at ways to improve it for next year and build on the momentum of the past two seasons.

The highlight of the 2007 festival was the Kokanee Slopestyle at the base of Whistler Mountain, which attracted an estimated 15,000 to 20,000 spectators to the village. As well, more than 5,000 people tuned into Rip.TV’s live webcast of the event, and thousands more have visited the site to watch the highlights.

That event also had a great local angle, with three 16-year-old riders from Whistler qualifying for the finals, then making it into the super-final.

There were a few new events this year, and a few hiccups.

The first Womenworx contest was considered a success, with 90 women taking part — a record for the Women’s Wednesdays program run by the bike park to encourage more females to start riding. That event included free lift tickets, discounted lessons, a gala party, and a contest where riders were judged on four features around the bike park.

The Telus Dual Slalom also debuted at the festival with a full roster of athletes. However, some critical timing issues forced organizers to delay the finals from Friday night to Saturday morning, and some of the top riders had to drop out of the running. Despite the timing issues, most riders were pleased with the event and organizers have pledged to bring it back next year.

Whistler riders did not shy away from the events, and at least 13 riders finished on the podium this year against a field of riders from 13 countries — South Africa, Spain, France, Andorra, Italy, Germany, Switzerland, Australia, New Zealand, the U.S., Canada and Brazil.

According to Breton Murphy, manager of corporate and member communications for Tourism Whistler, more detailed visitor numbers should be available in mid to late August. However, he says that most businesses he has talked to are reporting a strong festival.

“All indications we’ve had from the members we’ve had communication with are good, they’ve expressed a very high degree of satisfaction with the festival,” he said. “We’re quite confident that satisfaction will be reflected by our numbers when it comes to bookings and room nights.”

An economic impact study conducted during Crankworx 2006 pegged the economic value of the festival at over $11.5 million, with a 32 per cent increase in bookings over the previous year. In total, more than 23,000 people visited Whistler to watch or participate in Crankworx.