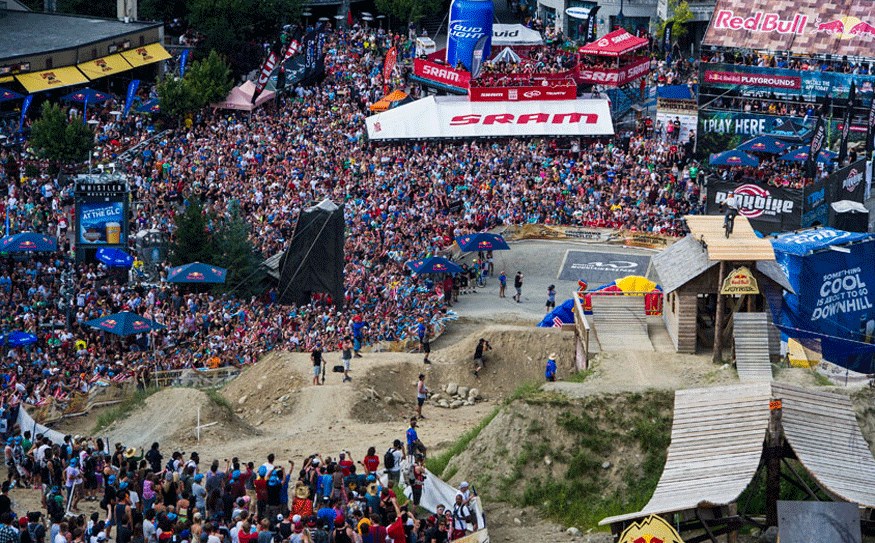 The ninth annual Crankworx is over and Darren Kinnaird, the mountain bike festival's general manager, is still basking in the glow of two weeks of first-time achievements.

The first of the firsts would be the sheer number of visitors, with an estimated 60,000 people in Whistler Village on Saturday, Aug. 18, for the second last day of competition. Kinnaird said visitor numbers were high for the whole two weeks of the festival.

"The crowds were incredible, just so many people were here right from the very beginning. Traditionally, the first few days are quieter but this year it seemed busy right from the word 'go'," Kinnaird said.

"Someone told me there were 60,000 people in the village on Saturday. There is no way of verifying that right now... But they were saying it was as busy as it was during the peak of the Olympics; as busy as it gets at Christmas."

Kinnaird ran off a list of other firsts for the festival, from the sporty to record business for some Whistler companies. The eclectic mix included breaking records for:

• the number of unique viewers to see live webcasts and replays;

• multiple days of sell-outs of tickets for the Top of the World Trail;

• the biggest prize purse for a downhill race ever (Jeep Canadian Open Downhill) and for a Slopestyle (Red Bull Joyride);

• the biggest jump ever in a slopestyle competition (60 feet);

• Steve Smith of Vancouver Island winning the Triple Crown of Crankworx — all three downhill races (Garbanzo Downhill, Air Downhill, and Jeep Canadian Open Downhill) — which had never been done before;

• Garibaldi Lift Company having its best day ever;

• beating the 10-day visit record for the Whistler Mountain Bike Park; and

As well, the Resort Municipality of Whistler reported that during Crankworx they were able to utilize the fibre optic network installed during the 2010 Winter Games to the greatest extent since the Games ended. The network was used to connect Crankworx events and Whistler Olympic Plaza, and broadcasting live footage on big screens.

"We think (the number of people) had a little to do with the new programming we did," Kinnaird said. "There were the concerts, and also the Dual Speed and Style race drew a lot of people into the village on the first Saturday night. There were between 6,000 and 8,000 coming to check out that event, which was really cool, said Kinnaird. "It's 'made for' TV. The best slopestyle guys, the best racers going head to head in a format that doesn't favour either side, so it's kind of neat."

Kinnaird said riders are often a source of new ideas for Crankworx events.

"The more you can get their involvement, the more interested they are in competing in events," he said.

This spike in guests coming to see the festival did not surprise Kinnaird.

"The interest in the event grows every year. We had the most amazing weather we could have dreamed of," he said, apart from a few thunderstorm concerns.

And how was Crankworx measuring up in the pantheon of large-scale mountain bike events around the world?

"We have the biggest slopestyle event in the world. There's nothing that draws as many fans as that. There are two diamond events in the Freeride Mountain Bike tour and this is one of them," he said.

"Whistler is so unique. It has everything the big partners, the exhibitors and everyone is looking for: the great restaurants, the nightlife, the Whistler Mountain Bike Park is such a massive attraction... and it's just so appealing to all of the different stakeholder groups."

Sponsors, too, had two very good weeks, he said.

One, Jeep Canada, pulled its biggest numbers ever for test drives at an event.

Others held executive meeting and media launches while the festival was ongoing.

"Next year is the 10th anniversary of Crankworx, so we're always trying to make things bigger and better every year. To be honest, the planning for next year started two months ago," Kinnaird said.

And Kinnaird wanted to thank the over 300 volunteers who helped, yet another record, though the huge volume of visitors meant that some volunteers had to drop out in order to work shifts around Whistler.

"We lost a few volunteers because they were forced to go back to their jobs because the weekend was so busy. A good problem to have, I guess," he said.

Michael Brisbois, chairman of the Restaurant Association of Whistler, said his members thought it was a fantastic festival, adding that the association liked that there were earlier events ending before 6:30 p.m., encouraging visitors to visit local restaurants.

"Everybody that I talked to or got feedback from in the association said that they were up or flat, depending on where they were in the resort. The places in the main village or Marketplace that I heard back from had a great Crankworx, they thought it was excellent," Brisbois said. "Those outside had the same numbers as last year."

Brisbois said they would like to see more weekday events, to spread the crowds out over the two-week period.

Meanwhile, Tourism Whistler's July visitor numbers were very much impacted by moving Crankworx from July, where it was in 2011, to August for this year.

While the final tally for August won't be in for a month, Louise Walker, Tourism Whistler's Vice President of Marketing and Strategic Planning, said accommodation bookings prior to the start of the event were 23 per cent higher than the last Crankworx held in August, in 2010. Statistics show so far this is the third busiest summer on record.

"We've had nothing but positive feedback so far," she said.

Walker was able to give July's numbers for visitors to the resort. Room nights were down three per cent last month from July 2011, though Walker noted that July 2011 was Whistler's busiest July on record.

"It was bolstered in 2011 by Crankworx (which was moved that year from August), and in terms of rates they remain flat, along with last year. We are still offering a very competitive rate which is good news for visitors," she said.

When Tourism Whistler looked at regions of origin of guests, there was a slight decline in the regional market, which includes Washington State and British Columbia, Walker said.

"That does correlate to Crankworx shifting (back to August in 2012) as well, so that would be expected," she said.

On a more positive note, there was an increase in conference and group business last month, along with increases from destination markets.

"So while there was a slight decline in room nights it's very positive to see more destination visitors," said Walker.

"I think summer has moved forward to being a bit of an 'on' season as well (as winter)....  July and August the last few years have been getting busier and busier."

Another trend, she added, was that accommodation occupancy was significantly higher at the weekends in July, compared to weekdays.

"You're looking at 70 to 85 per cent occupancy, whereas during the week it is down to 50 per cent. The challenge for us, moving forward, is to fill those midweek rooms," Walker said.

Other festivals picked up the slack in July after Crankworx was moved back to August for 2012, she added. This included the BC Bike Race, the Longboard Festival, The Children's Arts Festival and the Charlie's Angels All-Women Bike Race.

"The municipality contributed $100,000 in augmentation money for the festival, which came from (Resort Municipality Initiative funds), and that went to concerts and to Dual Speed and Style and the Ultimate Pump Track Challenge. This is exactly what the RMI funds are for, to augment already successful festivals to make them even more successful. It was good news all round," she said.

Given the sheer volume of people, relatively few incidents were reported to the RCMP. Staff Sgt. Steve LeClair of the RCMP said there had been one stabbing during Crankworx, which resulted in minor injuries. The investigation is ongoing.

"The numbers for intoxication in public (were) seven for the week. That's pretty standard (for any average night in Whistler), having one a night, so that's pretty good," he said.

"The police were out there all the time conducting patrols and I think that having the police out there, pouring out liquor, they were stopping problems before they got started."