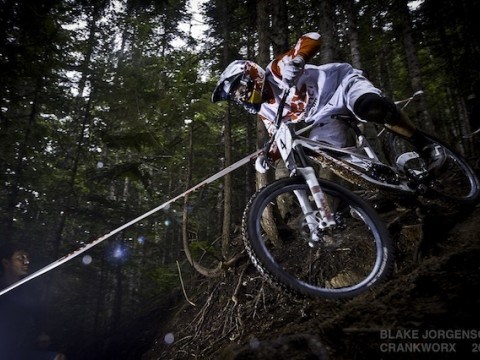 It was a busy opening weekend for the opening of Crankworx, with three events from Friday to Sunday.

It got underway with the Fat Tire Criterium, a road-style race on an 800-metre course around Whistler Olympic Plaza with a crowd of a few thousand.

The men's race was an eye-opener, as American downhill and freeride legend Brian Lopes showed that he could sustain over 20-minutes of gut-busting riding. He took all of the prime laps and won the overall race, followed by Kevin Calhoun of North Vancouver and Whistler's own Matt Ryan - who was biding his time to attack with his new hardtail 29er, but didn't realize it was the last lap until it was too late. Australian Charlton Durie was fourth, followed by Whistler's Dylan Wolsky.

Saturday was a wet one for the dual slalom, but if anything riders said the rain made the course tackier and a little faster as well.

Mitch Ropelato, who fell in the final last year, was perfect in two runs to take the win over Australian veteran Mick Hannah. Kyle Strait edged Michal Morosi for third place with a win in the small final.

On Sunday, downhillers took to a wet, muddy and technical course for the Canadian Open DH. Nanaimo's Steve Smith - currently ranked fourth in the world - upset a World Cup calibre field to take the win in 3:01.01. Andrew Neethling of South Africa placed second to Smith in 3:01.52 while Australian Troy Brosnan placed third in 3:02.68.

Gee Atherton, the defending champion, had a crash in the practice run that left him on the sidelines.

The Crankworx race calendar continues with the Garbanzo DH on Tuesday and the Jeep Air Downhill on Wednesday.