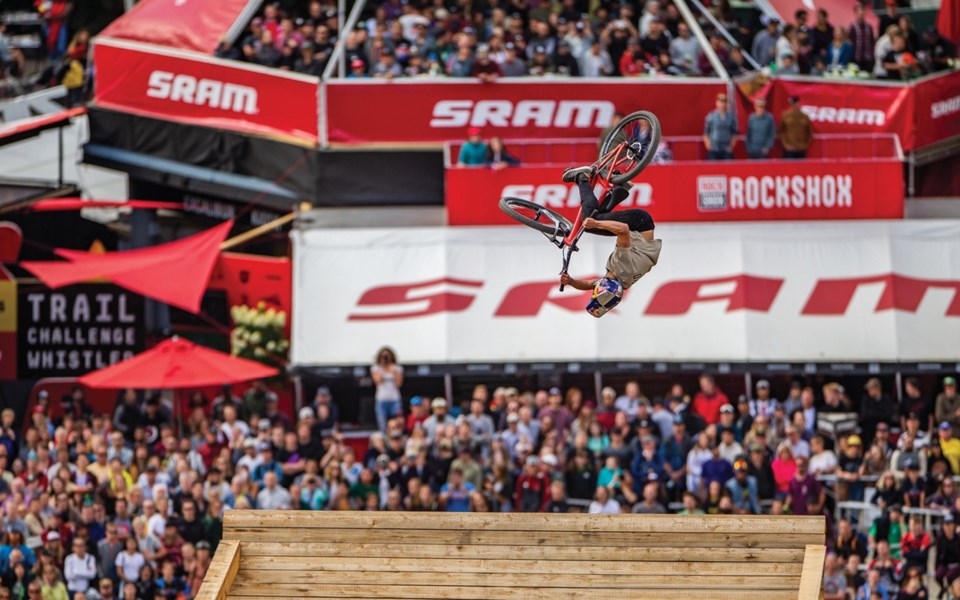 A YEAR WITHOUT JOY The 10th anniversary of Red Bull Joyride will have to wait after Crankworx Whistler was cancelled for 2020. Photo by Fraser Britton/Crankworx

Two of Whistler's stalwart events are officially off the calendar for 2020.

The Crankworx World Tour announced on May 26 that provincial restrictions on event sizes will prevent the festival from running as planned from Aug. 5 to 16, while on May 21, the RBC GranFondo Whistler, which was set to serve as the UCI Gran Fondo World Championships, announced its cancellation for similar reasons.

"I want these things as much as anybody else," Provincial Health Officer Dr. Bonnie Henry said in her May 25 media conference discussing summer events in general. "The purpose behind [the restrictions] is to try and make sure that we can effectively contain this virus and it is by effectively containing this virus that we can get our economy and all of our industries going again.

"So I can't give you a specific time [about when events will be able to start up again] but we will of course be re-evaluating and we are looking at it in periods ... and then we can reassess things again."

In both cases, Crankworx and GranFondo organizers said that postponing to later this year was not feasible.

"The provincial guidelines are pretty clear on what we can and can't do this summer, and we're pretty supportive of those guidelines," Crankworx general manager Darren Kinnaird said. "Safety is always the No. 1 thing for us when it comes to Crankworx and the Crankworx community.

"There should be no issues with that whatsoever," he noted.

The planned second stop on the tour in Innsbruck, Austria, initially set for June, was previously postponed to run from Sept. 30 to Oct. 4 and, according to Kinnaird, is still on track to go ahead as planned.

"Things are looking good over there. It could be a wild fall of mountain bike action if everything holds," he said. "From all indications we're getting from the team we work with in Innsbruck, things are looking positive ... Hopefully it continues to go in that direction and we'll be able to run a festival in Innsbruck."

Meanwhile, the RBC GranFondo Whistler, which was getting set to host North America's first-ever UCI Gran Fondo World Championships, will not go forward on Sept. 12.

"To be completely transparent, it has been an emotional roller coaster," race founder and GranFondo Canada president Neil McKinnon said on May 22. "The RBC GranFondo Whistler and particularly the World Championships is very aspirational. People train, people plan, and this happens over years. It transforms people's lives, so we take it very seriously.

"Even up to May 5, we were so hopeful, but we certainly understand and agree with the position of the provincial government and health authorities.

"It's disappointing, but under these circumstances, we agree that the most important thing is to get a handle on [the virus] so that we can eradicate it or control it."

"It's not a UCI decision. We just had to adapt our rules and regulations," he said on May 26.

McKinnon noted that many of the European qualifiers are held in the spring and were among the first to go, making the World Championships unlikely to happen.

"We knew the writing was on the wall throughout the year for the World Championships particularly, as all the qualifying events were cancelled," he said. "When some of them were postponed, they were postponed until after the Championships."

Those registered for the race will be granted a free transfer into either the 2021 or 2022 events, with more details to be revealed in the months to come.

"We'll do things on a case-by-case basis, but as you can imagine, when we have thousands of people registering, which we did, we have to create policy," McKinnon said. "We've gone beyond the industry standard, which is deferral by one year. We're certainly a reasonable organization. We'll take instances case by case."

Vervecken said that though the event can't be held in Canada this year, it is looking to find another way of holding the World Championships elsewhere to reward the riders who qualified at one of six races held earlier this season.

"We would like to still have a World Championships in 2020, so we are looking now at options to move them to a later moment in the year. Of course, it's not possible then in Canada anymore because of the cold and the daylight hours," he said, noting the UCI is in discussions with three organizers.

McKinnon said on May 21 that he was unsure as to whether the RBC GranFondo Whistler will serve as the UCI World Championships in 2021 or another year in the future, adding that he and fellow organizers have created the legacy of planning to this point and haven't given up on welcoming the World Championships down the line.

Vervecken, however, said that the World Championships have already been awarded for the next three years, though the B.C. team is welcome to reapply to host in 2024 or beyond.

"The first option is 2024 and if Neil wants to be a candidate for that, he knows the procedure," Vervecken said. "It's logically not possible to postpone it for a year because the people who have been awarded [the event] for 2021 have been working on these World Championships and have made some investments in these events."

While acknowledging that the UCI has a lot on its plate with numerous events in several different disciplines and that it needs events to happen to make money, McKinnon said he had hoped for more help from the governing body in navigating the crisis.

"I'm a bit disappointed in the UCI in that they weren't proactive in working with us to create opportunity, but in the end, I think everybody understood what was going on," he said. "The challenge that we found was we have a duty of obligation to participants, not only our local backyard, but international participants who are coming.

McKinnon, meanwhile, said that stakeholders and sponsors have been supportive and have continued the relationship into 2021.

As a large event welcoming roughly 5,000 riders, McKinnon said that when it returns, it likely won't look the same as it did in years prior.

"We suspect that there will be new normals," he said. "If anybody's got the capacity to adjust, it's us, because all we do are cycling events. We're already starting to make plans for a triumphant return in 2021, and as such, if we need to adjust in any way, we'll work with our stakeholders and obviously our health authorities to ensure that we're following proper protocols."

At the time of Pique's interview with Vervecken five days after the cancellation, the UCI had not shared news of the cancellation on its website or social media channels. Vervecken said though the UCI had been working with the local organizers on an announcement, it was released before they signed off on it, and they will release their own statement at a later date.

Karen Goodwin, Tourism Whistler's vice president of destination and market development, said the current climate means that Whistler's summer lineup will look much different than it has in the past.

"News of Crankworx and GranFondo cancelling their Whistler events is certainly understandable given the circumstances, and we look forward to their return in 2021 (when it is safe to do so)," she said in a statement. "Events are typically a strong driver of visitation during our peak summer months and add to the overall vibe in the resort. But as we know, this is going to be a very unique summer in Whistler, both in terms of resort experience and visitor demographics."