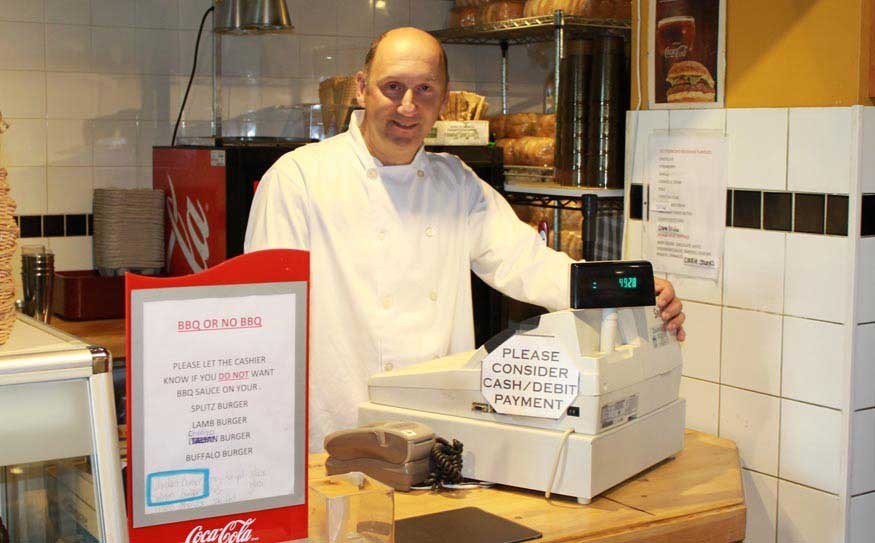 Credit cards are undeniably an integral part of Whistler's world, allowing tourists to spend money at stores and restaurants without the need for wads of cash.

But according to the Canada's Competition Bureau (CCB), businesses in this country are paying over the odds in usage fees to credit card companies like Visa and Mastercard. Compared with their peers in Europe, New Zealand and Australia, Canadian merchants pay double the fees, between 1.5 and three per cent or more of each purchase.

And some Whistler merchants believe they are being hit even harder because so many credit cards used at the resort come from visitors using foreign or business credit cards that are subject to higher fees.

Cathy McGeough, who co-owns Splitz Grill with her husband Paul, says their restaurant accepts credit cards but has a sign that says, "Please consider cash/debit payment."

"We try not to make people feel bad about using their credit cards, but at the same time if they ask I will certainly explain to them that free trip they're getting with their points card is coming out of my pocket and every other merchants' pocket," she said.

"Obviously, some businesses make more money than we do, so they're paying more. You think of a higher-end restaurant and absolutely most people do not pay with cash or debit."

McGeough says that in Splitz's case they are trying not to let it influence pricing decisions.

"But we're going to have to look at it. Everything is going up and if we don't raise prices it could kill us," she said. "A lot of my suppliers don't take Visa... because it is costing them too much money."

When he started Zog's about 17 years ago, the decision was made to make it a cash-only location to move sales more quickly. With Mogul's the concern about credit card charges became important.

"With Mogul's... the charges of Visa and Mastercard, because it's a penny and nickel business that we operate, it is prohibitive, that two or three or four per cent that they charge," he said. "We put in an ATM machine so we are making money from it instead of losing charges to Visa and Mastercard."

With Gone they decided to continue the previous owner's system of accepting Visa and Mastercard.

"We thought 'Gee, is the town going to like us if do that at all three locations?'" Katz said.

With this in mind, he said he was considering allowing Visa and Mastercard into Mogul's and Zog's.

"What I'm listening to from customers is that today we are probably losing customers. Fifteen years ago cash was more readily available, more people were using it. Today, people are using cash less and want to use cards," he said.

For Whistler merchants, said Katz, the situation means they are caught in a difficult position.

"We want to move the lines quicker, but at the same time our cheque averages run $5 and $6, so the margins are such that to pay $1,500 or whatever it might come to, it is significant to a small business player."

A tribunal hearing requested by the CCB is currently underway in Ottawa to look at the $5 billion a year charged to Canadian retailers and companies for offering credit card payment options to customers. A spokesman for the CCB told Pique that the hearing is due to end on June 21, with the results to be made public later this year.

When the hearing began in May, the CCB called the system "perverse." The decision of the tribunal will have the same impact on credit card companies as a binding court order.

Whistler Chamber of Commerce president Fiona Famulak said they are aware of the issue and watching the tribunal closely.

"This is an issue that significantly impacts small businesses across the country," she said. "Credit card fees add to the cost of doing business in an already challenging economic clinate. In Whistler, we have heard from a number of our members that this issue is directly affecting their bottom line."

Both Visa and Mastercard, which represented 92 per cent of Canada's credit card purchases made in 2009 according to the CCB, have legal representatives at the tribunal.

In a statement in May, Visa Canada said: "Visa's no-surcharge and honour-all-cards protections preserve consumer choice at checkout and ensure cardholders are not unfairly penalized for using their preferred form of payment. We intend to vigorously defend these pro-consumer provisions during the upcoming tribunal hearing.

"We are disappointed that the Competition Bureau of Canada is pursuing an anti-consumer and anti-competitive position that runs counter to the desires of Canadian consumers."