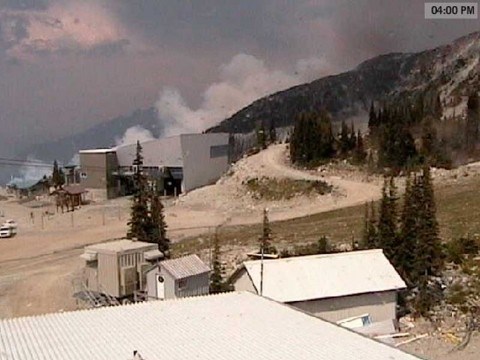 A crew of 34 firefighters has arrived in Whistler and tonight will be attacking a blaze on Blackcomb's Crystal Ridge.

The fire was started this afternoon by lightning strikes.

Speaking at a press conference in Whistler just before 7 p.m., Phil Taudin-Chabot, manager for the Coast Fire Centre, estimated the fire to be between 50 and 75 ha.

The fire is within the ski area boundary but as of Thursday evening there was no damage to the Crystal chairlift or any other Whistler Blackcomb infrastructure.

Meanwhile, a lightning strike in the Callaghan Valley has started a fire near the ski jumps in Whistler Olympic Park. Taudin-Chabot said an initial attack crew had been dispatched to the area but no further updates on the Callaghan fire were available.

Fixed wing aircraft and helicopters battled the fire on the east side of Crystal Ridge Thursday afternoon. Large plumes of smoke and occassional flames could be seen from throughout the Whistler valley.

The fire was first reported at about 2:45 p.m., but Whistler Blackcomb had already evacuated all vistors and staff from the two mountains by about 2:30 p.m.

"We saw the lightning coming at about 1  p.m. and we stopped selling tickets and started moving people off the mountain," said Doug Forseth, senior vice president operations for Whistler Blackcomb.

Forseth estimated there were about 300 people on Whistler Mountain at the time, and between 50 and 75 people on Blackcomb.

Whistler Blackcomb monitors lightning storms when they get within 100 km of the area. Some people were evacuated from the mountain last weekend when another electrical storm came through the valley.

Rain started Thursday evening in Whistler, but lightning is in the forecast again Friday.

With temperatures in the Whistler area well above 30 C for several days and the forests tinder dry,  Taudin-Chabot said an additional 60 firefighters are on standby.

Conditions are similar throughout much of B.C. but Taudin-Chabot said he would have no hesitation to pull resources from more remote fires if they are needed in the Whistler area.

There were also reports of an evacuation order for residents of Whistler Blackcomb's staff housing on Glacier Lane near Base II on Blackcomb.

There was no evacuation of Whistler Village or any other areas in the valley. While some people stopped to watch the aerial firefight, many others went about their day as usual.