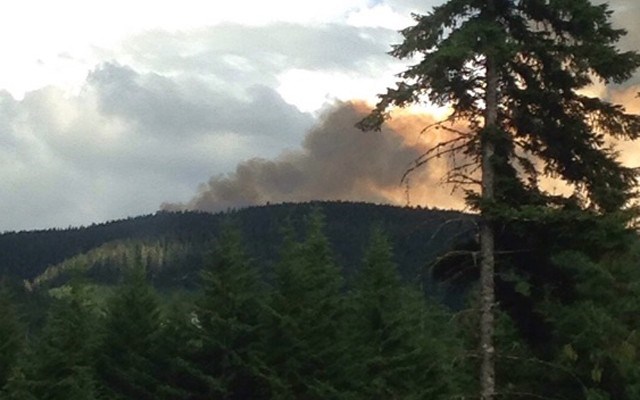 TOO CLOSE FOR COMFORT Smoke can be seen rising over Whistler Mountain on Monday evening after a lightning storm caused a handful of small fires in the area. Photo by Ashley Ouellette

UPDATE: The fire in Khyber Pass on Whistler Mountain is now in mop-up, the BC WIldfire Service has confirmed.

"They’ll mop it up and then what they’ll do is they’ll put it in patrol, which means they’ll go in and check it every couple of days," said Marg Drysdale, fire information officer with the BC Wildfire Service.

"When they're satisfied there’s no hot spots on it whatsoever then they’ll declare it out."

BC Wildfire Crews are hard at work today attending to a handful of fires in the area after a late afternoon lightning storm on Monday.

A total of 26 firefighters are fighting two fires on Whistler Mountain — one in Khyber Pass that is 2.5 hectares in size and another nearby that is 50x50 metres, said Marg Drysdale, fire information officer with the BC Wildfire Service.

"This morning (the Khyber Pass fire) was about a Rank 1, so it was actually basically just rolling smoke," Drysdale said.

"We expect that as the heat of the day progresses that it will be more active... we did have helicopters bucketing on that fire yesterday, and we do have a unit crew again that will be working on that fire."

Both fires were caused by lightning strikes.

Whistler Mountain will be open and operating as usual today, with the exception of the Peak Chair, Whistler Blackcomb said in a release.

The Peak Chair will remain closed as a precautionary measure while helicopters attending the fire continue to draw water from the Peak Reservoir.

The fire is located in a remote, inaccessible area on the edge of Whistler Blackcomb's Controlled Recreation Area, and is not a threat to people or structures.

The heavy rainfall may have helped keep the Khyber fire from spreading faster, Drysdale said.

"(The rain) keeps things cool, and that's why we have it at a Rank 1 this morning, is because it was cool last night and because there was some moisture in the air," she said.

"There may be more lightning in the area again today, so we're asking people again to be very aware of this, and that if they do see any columns of smoke to please call them in," Drysdale said.

There's also the possibility of "holdover" fires — fires started by lightning but dormant until they get a good blast of summer heat.

Crews are also attending to three small fires near Pemberton — one at Mackenzie Basin, one at Millar Creek and one near Rutherford Creek.

The service received well over a dozen calls about the fire activity near Pemberton, "which is great, because of course if we get early reporting, then we can actually get onto these fires very quickly," Drysdale said. "So that was wonderful."

Check back with Pique for updates.