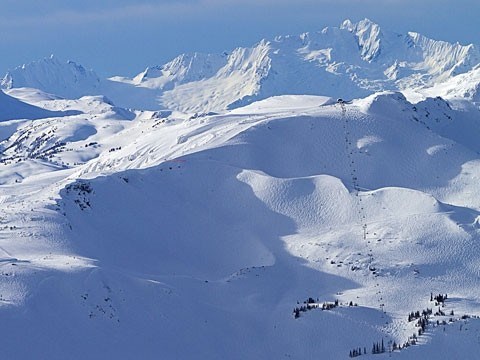 Officials with Whistler Blackcomb hardly said a word at a Saturday open house before learning what the public wanted: a new chair to Crystal Ridge.

The company hosted a packed open house with about 250 people in the foyer of the Whistler Conference Centre over the weekend where it opened up for public comment a master plan that includes new lifts, terrain and areas for development on the mountains.

"I know one of the first questions is when are you going to replace the Crystal Chair with a high speed express," Brownlie said to an immediate "yeah" and some applause from the audience.

Improving the Crystal Chair is near the top of the list for Whistler Blackcomb, whose officials said Saturday that they are looking at replacing it with the high-speed quad Harmony Express. The Harmony lift would be replaced with a six-seat lift.

"We could take the Harmony Chair and move it over to the Crystal zone," Forseth said to some scattered applause. "Voting with your hands, that's good! So that could be among the first moves we make out there."

Speaking after his presentation, Brownlie told Pique that moving the Harmony Chair to Crystal and replacing the Harmony Express would cost around $12 million to $14 million.

He said the expense would come out of operations but to make it happen the company would need to see an increase in destination visits from areas like Europe.

The Crystal Chair is a 375-metre triple chairlift that takes skiers and snowboarders to some of the most popular terrain on the mountain including Ridge Runner and Rock and Roll.

Other plans, perhaps more long-term than a new chair at Crystal, include a new lift to provide access to the Flute area.

As it stands right now, skiers and snowboarders have to take the Symphony Express and make about a 25-minute hike to Flute. A new lift up to the top of Flute Bowl would reduce the walk.

"In our master planning we have to look as far into the future as possible," said Arthur DeJong, Whistler Blackcomb's mountain planning and environmental resource manager. "So we have to look at our highest elevation opportunities for more snow resilience and that is a primary driver to being in the Flute Bowl."

The plan for a lift into Flute Bowl met with some resistance from Karl Ricker, a long time Whistler resident and member of the Whistler Weasel Workers, a volunteer group that prepares ski runs for race events such as the Olympics and various World Cups.

He said a lift as envisioned in the master plan would be right on the boundary of Garibaldi Provincial Park and could bring a lot of garbage into its boundaries.

"If you go to the alpine area on Whistler and Blackcomb, you'll find garbage everywhere in the alpine zone," Ricker said. "Water bottles and signs they don't bother to pick up and stuff like this. It's not going to hurt anybody to walk over to the top of Flute from the (Symphony) lift, it's not a backbreaker."

Ricker also expressed some concern about plans for new lifts on the Blackcomb Glacier, which include a fixed quad chair to service return cycle skiing and snowboarding, as well as a lift to the top of Ruby Bowl.

Further plans include development of a new ski terrain on the west side of Whistler Mountain in the Khyber area. Forseth said in his address that some Whistler residents consider it "their" terrain.

Development of the west side could include a gondola that begins at Cheakamus Crossing and goes to what Whistler Blackcomb expects could be a new base part-way up the mountain. That base could include a new parking lot and, if there's enough demand, more accommodation facilities.

"We have a couple of projects here potentially like the Khyber zone that might be contentious for some people," he said. "We have some people in the community who ski that all the time, they love it, it's their own private stash and we get that. But there's others who are not skiing over there."