Cyclist knocked off bike by cougar in Squamish 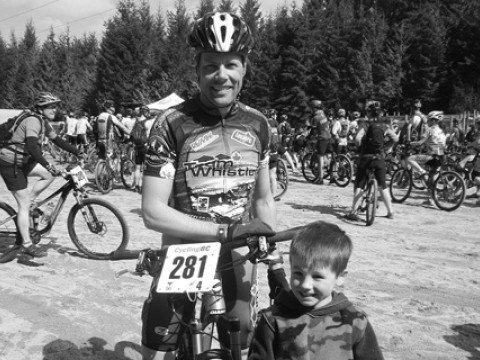 A training run for the Test of Metal resulted in a close encounter with an adult cougar in the Crumpit Woods area on Friday afternoon.

Dean Linnell was riding with three friends, but was in front by a few minutes when the cougar jumped onto his bike. The next thing he knew he was crashing off the side of the trail.

"I wasn't paying attention at all, I was completely cross-eyed at that point, but coming up the last switchback I saw something pounce off the mossy knoll beside me and saw brown coming down behind me," he said. "The next thing I know, I'm crashing off the trail. I think it missed me and got the back of my bike."

Linnell had a pretty good idea of what happened and was already yelling at the cougar as he got to his feet. "I was yelling and screaming and being aggressive, and as I looked up there it was on the trail, maybe four or five feet away from me."

Linnell picked up his bike and continued to be aggressive, but the cougar wasn't easily scared away.

Linnell kept up the aggressive behavour and even managed to get the cougar to move a few feet off the trail when the group he was riding with caught up. Linnell yelled to the others that there was a cougar, and in a few moments there was a group of four riders challenging the cougar. It was maybe 20 feet away at this point, but didn't seem that concerned - even when the riders started to throw rocks in its direction.

"We didn't really scare it all that much," said Linnell. "One rock almost hit it in the head and it just deked its head to one side. It didn't even move its body. Eventually it leaped into the ravine and wandered away. It wasn't running, it just casually left."

Linnell said it was a large, healthy-looking cougar and estimates that it was eight feet from nose to tail.

Linnell and his party contacted the Conservation Office, which has posted signs in the area and conducted patrols.

"This was an encounter of some concerns, so we posted some signs and sent out warnings, and we've patrolled the trail," said Chris Doyle of the Conservation Officer Service.

They did not bring in a dog team as earlier reported because too much time had elapsed between the incident at 1:15 p.m. and the start of the investigation. "If we determine the cougar is a threat to public safety and continues to be a threat... it would be destroyed," said Doyle. "In this case it looks like the biker caused a pursuit from the cougar, and the cougar did not follow up with an attack. The confrontation on the trail is a concern for us, which is why we've posted signs and are asking people to report any sightings."

As of Tuesday the cougar has not been spotted again.

Linnell, who sustained some minor cuts and scrapes in his fall from the bike, has since spoken to another rider who was training in the area that day on her own an hour after his group came through, but she did not encounter the cougar.

The experience hasn't soured Linnell on riding the Test of Metal this Saturday, June 18, but Linnell said he would never ride on his own in that area.

The Test of Metal organizers said they would likely warn riders and ensure that there are no lone marshalls in the area.

Linnell said the encounter was a reminder that we recreate near wildlife and that you should know what to do when you encounter a predator. "The main thing is to make sure in that situation that you don't run away or show the cougar your back," he said. "I think as I rode by it, its chase instinct made it pounce at me - nothing could have prevented that because I never saw it. But after it attacked I didn't bolt or run away. It could have been a very different situation if I did."

It also came to Pique 's attention this week that there was a cougar sighting in Whistler two weeks ago in Lost Lake Park. Iain Warren was playing a round of disc golf by himself on June 1 when the encounter happened.

"I heard a snap in the trees and wasn't really sure what was going on," he said. "I thought maybe it was a bear. I came off the next tee (on Hole 23) after I threw and saw the tail in the air. Then I saw the body and his nose sticking out.

"I made some noise and backed away slowly, and he didn't follow me. I didn't know how long he was in front of me or behind me."

Warren said he warned some other disc golf players that there was a cougar in the area, but did not call authorities - at the time he didn't want to scare people away from recreating in the park, and the cougar didn't attack and responded to noise.

It was likely a full-grown cougar. Warren estimates that it probably weighed a few hundred pounds and that its back was about three feet off the ground. Unlike the Squamish cougar, this cougar was on the thin side.

The B.C. Conservation Office has a list of things to do if you encounter a cougar. The most important thing is to stay calm and keep the cougar in view, backing away slowly while ensuring the cougar has an escape route. Children are especially vulnerable, and you should pick up any children immediately if there is a cougar in the area.

You should never run or turn your back on a cougar, or make sudden movements that could provoke an attack. If a cougar shows interest or follows you, respond aggressively by maintaining eye contact, showing your teeth and making loud noises. Arm yourself with rocks or sticks, and stay upright as much as possible when bending down to pick up rocks and sticks.

If a cougar attacks, fight back to show the cougar that you are a threat and not prey. Use anything available as a weapon. Focus your attack on the cougar's face and eyes.

The complete advice is online at http://www.env.gov.bc.ca/cos/info/wildlife_human_interaction/docs/cougars.html .