Whistler Blackcomb COO stepping down this summer after 29 years in the industry
Jun 1, 2017 4:00 AM By: Pique Newsmagazine Staff 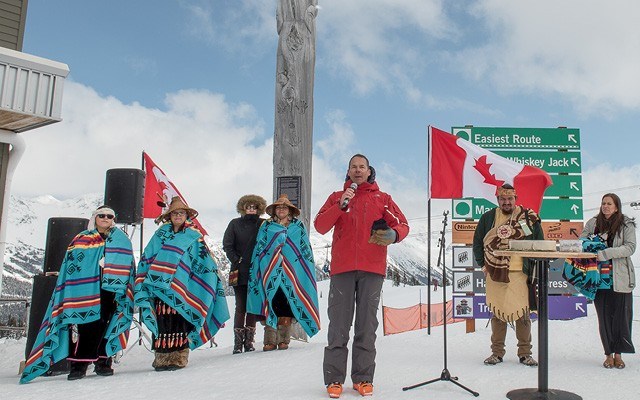 ELEVATED VISION Dave Brownlie, who will be stepping down as COO of Whistler Blackcomb this summer after 29 years in the industry, at an April ceremony marking the signing of Whistler Blackcomb's Master Development Agreement with the B.C. Government, with the support of the Squamish and Lil'wat First Nations. Photo by Clare Hodgetts / <a href="http://www.coastphoto.com">www.coastphoto.com</a>

Anyone who knew Dave Brownlie back when he first began his career in the ski industry for what was then Blackcomb Mountain will tell you that he was brimming with potential.

But few, least of all Brownlie himself, could have predicted then the bright future that lay ahead for the Burnaby native.

"I was 26 years old and had no idea what I was doing," Brownlie said of his role as director of finance for the rapidly growing resort property. "I worked super hard just to make sure I didn't get fired every day."

"It was great working with Dave through all of the years and watching him grow," he added.

After 29 years, one massive merger, multiple changes in ownership, a recession, and a successful Winter Olympic and Paralympic Games, Brownlie announced last week he would be stepping down as COO of the company he helped usher into Whistler's modern era.

Pique met with the 54-year-old WB executive this week, in the very same building where it all began, to look back on a remarkable career spanning four different decades.

"It's been an amazing run," Brownlie said. "4545 Blackcomb Way was head office, this was where all the decisions were made, and I've loved that. I loved that because, being involved in all the different things we got to do here, being involved with the community, and moving everything forward together has been super rewarding and a lot of fun."

The power of collaboration is something Brownlie brings up regularly. He is, in many ways, a great unifier, with a knack for getting parties with seemingly divergent interests to see eye to eye. He was instrumental in bringing together Whistler's major resort partners — WB, the Resort Municipality, and Tourism Whistler — at a time when the organizations largely operated in "a silo," explained Paul Mathews, president and founder of EcoSign Mountain Resort Planners.

"They'd talk to each other occasionally, but they didn't share any numbers, they didn't sit down — unless it was in an argument. It was to each his own," he recalled.

"Dave is the first president or CEO of Whistler Blackcomb that was so fully engaged with the community, in my mind, and has created this tripartite agreement of how we guide the ship, with three hands on the tiller."

A more recent example of Brownlie's unifying powers came in February with the landmark signing of WB's 60-year Master Development Agreement between the resort, the province, and the local Squamish and Lil'wat First Nations. By all accounts, it was a long and often challenging negotiation that was aided in no small part by Brownlie's levelheaded influence.

"It was a learning adventure as we started down this road and really understanding both the Lil'wat and the Squamish in terms of what this place means to them, and also the history of aboriginal rights and titles. It was a journey for us," said Brownlie.

He would be the first to admit he's never been the kind of attention-courting CEO you often find at the helm of billion-dollar companies — "He'd rather have a root canal than give a public speech," Mathews said with a laugh.

Brownlie's many strengths tend to manifest primarily behind the scenes: his financial savvy, his adaptability to any situation thrown at him, and his ability to see the big picture long before anyone else.

Case in point: Brownlie's vision for the Peak 2 Peak Gondola, which, in hindsight, seems like a no-brainer for the resort, but in reality was met with considerable opposition when the concept was first introduced. The story of Brownlie's pitch to a room full of investors has by now reached near mythic proportions in WB circles.

"The Peak 2 Peak Gondola, Hugh Smythe and I were the dreamers of that big idea, but it was really Brownlie who figured out how to monetize it," Mathews said. "Dave became convinced that it would become such a game-changer, when there was only a handful of people in the whole town who saw the wisdom of spending $52 million on the project."

Brownlie's steadying hand has never been far from the forefront of any of the mountain resort's major developments over the past 25 years. He was handpicked to lead the 1997 merger of Whistler and Blackcomb mountains alongside Doug Forseth, a fruitful partnership that Smythe said "speaks volumes" to Brownlie's natural penchant for collaboration. He was there for the purchase, in 2006, of then-WB owner Intrawest by the private equity firm, Fortress. He weathered the storm just three weeks before the 2010 Winter Games when Fortress defaulted on its loan payment, forcing Intrawest to divest some of its holdings, and leading to the partial sale of WB and the company's eventual Initial Public Offering on the Toronto Stock Exchange. He helped lead WB out of Whistler's post-Olympic slump and then, in 2012, his first year as CEO, Brownlie endured another upheaval when Intrawest sold its remaining stake to KSL Capital Partners.

"(Brownlie) has navigated some pretty significant, challenging periods. There was a period of time there where he pretty much had somebody new he was reporting to every two or three years," noted Smythe. "He's learned a ton. If you look at it, get up 30,000 feet and look down on his career, there have been no flameouts."

The most recent sea change for Brownlie has, of course, been Vail Resorts' $1.4-billion takeover of its largest former competitor. The executive knew full well his role was going to change "pretty substantially" after the deal was announced last summer.

"I didn't quite know what everything looked like, but I did know that, No. 1, we wanted to make the short-term transition as smooth as possible for everybody: our staff, the community, and our guests," he said.

"Now we're part of a bigger company. It operates differently, and it's a very successful company. Looking at that and looking at where we were going — maybe I had such a high watermark for what I was doing before — I felt it was time for me to move on."

A concern for Mathews is that "a voice for Whistler" is being lost with Brownlie no longer heading WB's operations. Vail Resorts' history suggests the ski-industry giant is likely to bring in an executive from Broomfield to fill Brownlie's position. Whomever ends up in the role, Brownlie is confident WB will remain in good hands.

"We've got a tremendous local leadership team, we've got a passionate, committed, and talented management team, and those are the people who make it work every day," he said. "Then you take in the big picture: You've got a company that's absolutely committed to the mountain resort business. You've got a company that has a history of investing significantly in their resorts, and so, you kind of step back from it and think, you know what? It's going to be OK. Whistler will continue to be one of the leaders in this business for many years to come."

Carrying the relaxed air of a man looking forward to some well-deserved R&R, Brownlie said he plans to spend time with family before launching headlong into a lifestyle he spent years selling to the masses, but never really got to experience himself.

As for his next professional move, Brownlie is sure the right opportunity will come, but for now, he's happy to revel in a career that even he seems to be surprised by at times.

"It truly has been a privilege to be able to work with the team at Whistler Blackcomb, the people that I've learned from, the leaders in the community... who worked together to create what is arguably the No. 1 resort in the world. It's crazy. We get so used to it because we're in it. But if you step away and get out in the world, you realize this is a really special place. We've made a lot of decisions that have been right, and it's just great to have been a part of that."