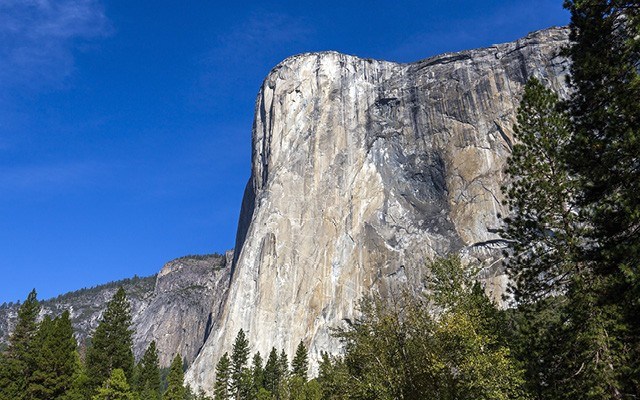 In October 1999, five people climbed El Capitan in Yosemite National Park, Calif., to commit an act of civil disobedience: parachuting off the 900-metre high granite cliff. They knew that park officials would dole out notices to appear in court afterward, fine them $2,000, and confiscate their gear, because BASE jumping, or parachuting from stationary objects, is illegal in national parks. A 1965 law that predates the sport forbids "aerial delivery" of people or goods into parks.

The jumpers were protesting that law, which was unjustified, they said, and had contributed to the recent death of Frank Gambalie, who drowned while fleeing rangers after a jump.

Media, park officials, supporters and tourists gathered in a meadow to watch the act of disobedience. "Jump to freedom!" someone hollered, while another howled, "Down with the Park Service!"

Jan Davis jumped fourth. She wore a black-and-white-striped jumpsuit, and anticipating confiscation, a borrowed parachute on her back. Ten seconds in, when her parachute still hadn't released, a man filming from El Capitan tensed up. "Pull, woman," he begged. "Dude, she's got problems, man," he said after a few more seconds passed. Then, he gasped: "Oh, my God." Davis hit the base of the cliff, dying on impact.

"It was a horrible thing," says Yosemite spokesman Scott Gediman. The park's willingness to consider legalizing BASE jumping ended that day.

Two high-profile deaths in Yosemite this May, however, provoked new calls from jumpers to end a ban that they consider discriminatory and an indirect cause of fatalities. "This is public land, these users are not impacting the resource, and they have every right to be there," says Steph Davis, a Moab-based professional rock climber and BASE jumper.

In the U.S., BASE enthusiasts say that many of the best and safest features to leap from — very tall cliffs — are in national parks. The height and verticality of Yosemite's sheer walls and the broad valley below make it, in particular, a jumper's dreamscape. By comparison, the cliffs on Bureau of Land Management (BLM) land near Moab, where jumping is legal, are much lower — and thus, more perilous — with sketchier landings.

"To a U.S. mountain flier," explains Zak Tessier, a wingsuit pilot, an advanced form of BASE jumping, "the question would be, which would you rather put more at risk: Your life on a 20-second BLM flight, or your freedom and wings on an exponentially safer one-and-a-half-minute national park flight?"

Dean Potter and Graham Hunt took the latter risk on May 16, when they launched off Yosemite's Taft Point after 7 p.m. They wore wingsuits, with fabric between the legs and under the arms that allows humans to soar like flying squirrels, sometimes within metres of trees and rock. Both men perished when they failed to clear a shadowy notch on a nearby ridge.

Their deaths renewed outrage over the law. Avoiding "ranger danger" is always a major concern, says Tessier. "We feel a real need to be like ghosts," and jumping in fading light is a common, but risky, strategy. "There's a thing called the 'doom factor,' which is shadows," explains Rick Harrison, a long-time BASE jumper. "As the sun sets, shadows move over the land very rapidly. It can really play tricks on you."

Harrison says the sport's illegality has been a factor in "almost every fatality" he knows of in parks. "It causes jumpers to jump in low light, using old or used gear. It causes them to rush, instead of focus." Davis believes the law played a part in the death of Sean Leary, a close friend, in an after-dusk jump in Zion last year.

But the jumpers' own rule-breaking record is one of the reasons the ban persists. In 1980, soon after skydiver and BASE pioneer Carl Boenish filmed some of the earliest jumps from El Capitan, Yosemite officials agreed to a trial period, issuing up to 12 daily permits, similar to how they regulate hang gliding, which is legal one day per week from Glacier Point. When all the permits were claimed, however, some jumped without them, and a group known as the "flatbed 10" drove a truck up El Capitan to avoid the hike. "The hang-gliding community has always been very compliant with the regulations," says Gediman, "whereas the BASE jumpers have not."

Gediman adds that jumping created a "circus-like atmosphere," and Park Service policies specify that activities must not interfere with "the atmosphere of peace and tranquility." Crowds gathered to watch during the trial period, and on its last day, Boenish and others jumped from a pogo stick, skateboard and stilts. "There were just too many free spirits, and we had to shut them down," Bill Wendt, then chief ranger, says in Sunshine Superman, a new documentary about Boenish.

Jumpers today argue that BASE is a leave-no-trace sport, with as little environmental impact as hiking. Plus, says Davis, "(Yosemite) has an ice cream stand and a skating rink." The idea that jumpers would taint the "natural" atmosphere of the RV-clogged park is, she says, "a little ridiculous."

Ultimately, though, a proposed activity must not only do no harm, it must enhance a park's "purpose," "values" and "visitor experience," subjective criteria that can make decisions seem somewhat random. Along with hang gliding, for instance, Yosemite allows highlining, a sport that Potter pioneered, where people walk a thin piece of webbing rigged across canyons or other chasms. Mountain biking is allowed in portions of some parks, but not most, and kayaking is illegal in parts of Yellowstone and Grand Teton.

A 2006 policy revision allowed individual parks to permit jumping at their discretion, but it's still authorized at only one in West Virginia, only one day annually. Cindy Purcell, chief ranger at Zion, says her park hasn't formally considered legalized jumping. But if they did, they'd consider whether landings might impact sensitive plants or animals, what sort of demands might fall to search and rescue, and whether the activities of the few would impact the experience of the many. "We always have to ask that question: How does it relate to the purpose of the park?" she explains. "Is the spectacle in Zion the geology, or is the spectacle watching somebody fly from the cliffs?"

The BLM, on the other hand, takes a "come one, come all" approach. Beth Ransel, head of the Moab field office, says that BASE jumpers are light on the land and seldom provoke conflict with other user groups. There's plenty of space, and their numbers remain small. "Thank God for the BLM," says Davis. "It's nice to have places where we're just normal people."