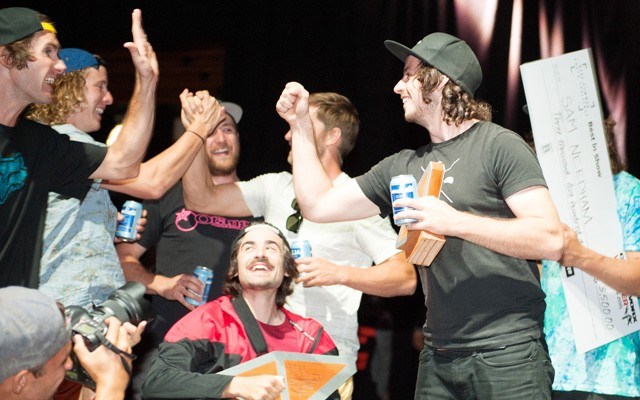 Five photographers are vying for the right to call themselves the best mountain-biking photographers in the world at the Samsung Deep Summer Photo Challenge, part of Crankworx.

The five will spend three days shooting around the resort and creating a slideshow for presentation at Whistler Olympic Plaza on Wednesday, Aug. 17.

Organizer Seb Kemp says changes to the screens at Whistler Olympic Plaza mean the show will start earlier than in the past. He hopes people will take their seats by 8 p.m., with the show beginning by 8:30 p.m.

Prizes for the winners of Deep Summer — one is selected by a judging panel, another by online public vote — will be announced at the event.

Tickets are $8 and available at www.crankworx.com. Online voting begins on Thursday, Aug. 18, and will last a week.

Dirt Diaries give athletes the camera

Six mountain-biking athletes have spent two months pulling together a team of riders and filmmakers and creating a four-to-six minute video for Crankworx's Dirt Diaries competition.

The presentation and judging of the videos take place at Whistler Olympic Plaza on Tuesday, Aug. 16, at 8:30 p.m.

Tickets are $8 and available at www.crankworx.com.

The Comedy Quickies competition, part of the Whistler Writers Festival, has a final call for funny writers.

Finalists will see their work performed at the Maury Young Arts Centre on Thursday, Oct. 13. Producers Ira Pettle and Brandon Barrett will help writers hone their scripts and cast them, if necessary.

The finalists will be announced by Thursday, Sept. 1.

Whistler Pride and Ski Festival may be five months away, but organizers have announced several performers for the resort's gay ski week, which takes place from Jan. 22 to 29, 2017.

Next year is the festival's 25th anniversary.

Italian DJs and producers The Cube Guys have been confirmed for Snowball 25, the club night finale for the festival.

The Aava Whistler Hotel returns as the festival's host hotel.

Tickets are on sale at www.gaywhistler.com.