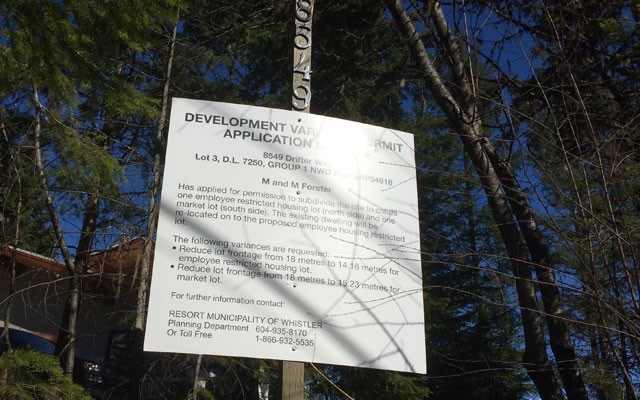 VARIANCE DENIED An application for infill housing in Alpine has been derailed after Whistler council denied a variance permit for the project. Photo by Braden Dupuis.

A Whistler family is left with questions after a minor variance requirement derailed their infill housing application.

"In the very beginning, we went to the municipality with our plan, and everybody sat there and told us it was great, and it worked, and to put in a development permit," said Michelle Forster.

The Forsters have lived in Cheakamus Crossing for five years, but sold their home last August. Their plan involved purchasing a lot in Alpine Meadows from a friend, and then using the infill housing zoning to subdivide the lot.

In their eyes, the proposal would allow the Forsters to move into market housing in their price range, while simultaneously freeing up their Cheakamus Crossing unit for another young family and creating a new WHA unit in Alpine.

"Then somebody picked up on a technicality in the zoning, which is why we then had to do a variance permit," Forster said.

The DVP — varying the frontages for the two lots — brought the matter before council.

Though RMOW staff recommended approval, at its March 15 meeting council voted five to one to deny the DVP, and placed a moratorium on the infill housing pilot project, pending staff review.

"This has taken six months, it's taken a lot of money. We've gone on the advice of the municipality. There are no guarantees obviously, but it fits within the zoning," Forster said.

"So how they can just shoot it down like that, I don't know. It did sound to me like the decisions were already made."

Through the DVP process, the RMOW received 13 responses — six in favour and seven opposed.

"I listened to the neighbours who spoke about it, and some of them were very compelling as far as what they thought it would do to privacy, to views, to additional traffic in the neighbourhoods," said Mayor Nancy Wilhelm-Morden, who lives in Alpine and by her own admission has never been a big fan of the infill housing policy, which caused controversy when it was first proposed.

There was also concern about the logistics involved with relocating the old house to the new lot, Wilhelm-Morden said.

"There were a number of problems with this application," she said.

The moratorium on infill housing was introduced, in part, to ensure similar situations don't happen with applications in the near future, but also because things have changed in Whistler around affordable housing since the idea was first floated in 2002.

With the Rainbow and Cheakamus Crossing neighbourhoods — and a considerable land bank yet to be developed — it doesn't make sense to "pit neighbour against neighbour," the mayor said.

"Plus, we've had this policy in place for many years, and we've only had one successful application," she said.

"What's wrong with it? If we carry on with it, what do we want to change to make it more acceptable?"

Coun. Jack Crompton, who also sits on the board of the Whistler Housing Authority (WHA), said there were good reasons both to grant and deny the application.

On one hand, it would have added to the affordable housing stock and allowed a Whistler family to build a home, but the application conflicted with existing zoning and created problems for neighbours, Crompton said.

"I think that that's often what being on council is about for me — balancing competing (interests)," Crompton said. "So that's what we did, and obviously it's extremely disappointing for the people who were proposing the subdivision, and that's understandable."

But the goals of the residential infill bylaw are still valid today, Crompton said.

"The truth is, the residential infill housing bylaw hasn't delivered what it was designed to deliver," he said.

"So I'm hopeful that the proposed study will move us closer to accomplishing what I think are worthy goals, and they include things like creating new dwelling units without exceeding the capacity of municipal services and infrastructure, (and) allowing families to stay on property that they own."

Coun. Sue Maxwell voted in favour of the application, but agreed it had some questions attached to it.

"Obviously this wasn't an ideal proposal to come forward, but I think it was good because we as a council started discussing what infill housing looks like," she said.

"Why isn't there more uptake of it, and what would we look at to strengthen it? I think all the principles behind it are still worthy. So then the question is, is there a different way to achieve it?"

Marla Zucht, general manager of the WHA, said she hadn't reviewed the application, but agreed the goals of the zoning are still valid.

"Many hours of staff time and community consultation went into the creation of the Infill Housing policy for the community between 2002 and 2010 and it would be a shame to lose this initiative," Zucht wrote in an email. "I agree that this policy could be reviewed and, where appropriate, would actually like to see more uptake of it throughout Whistler."

The WHA has 1,916 resident restricted units, and there are currently no units available for rent or resale in the restricted inventory, Zucht said.

There are about 400 names on the waitlists for restricted ownership and rental units, she added.

"The additional resident restricted units that are being planned and under development at Rainbow (above the commercial plaza) and the WHA's new rental project in Cheakamus Crossing will continue to help by providing more housing for the local workforce," Zucht said.

The RMOW has a pretty good handle on what its non-market-housing stock consists of, but there is less research on the market side of the equation, Wilhelm-Morden said.

The municipality is in the early stages of researching what the market looks like, and how it's changing.

"There are all kinds of decisions that will come out of this research."

But the questions remain for the Forsters.

"My question is, where do all the people that outgrow the Cheakamus Crossing units go?... I'm outgrowing, I'm trying to move on to provide opportunities for other families too," Forster said.

"There's got to be something between the current Whistler Housing three bedroom townhome option and then the $3-million house."