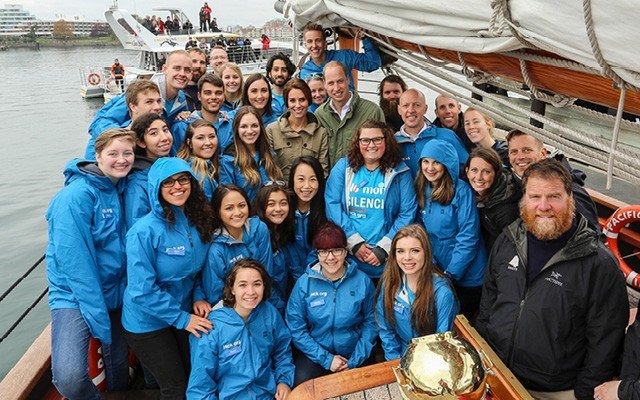 ROYAL COMPANY Student leaders from Jack.org , a national network of youth battling the stigma around mental illness, pose with Prince William and Princess Kate, Duke and Duchess of Cambridge, centre, on their visit to Victoria last month. photo submitted

Whistler's Ginny Dennehy had an important realization on a cross-country bike ride she took with her husband in 2013 to raise awareness of mental health issues in Canada.

"One of the conclusions I came to was that we have to partner with people," she said. "We knew we needed to look at the best practices across Canada and work together. This work doesn't need to be done in silos."

It's a lesson that paved the way for the Dennehys' recent partnership with Jack.org, a national network of young leaders "transforming the way we think about mental health." Founders of the Kelty Patrick Dennehy Foundation, which was named in honour of the couple's teenaged son after he committed suicide in 2001, the Dennehys have been tireless advocates for youth mental health in B.C. in the past decade and a half. Through their support of Jack.org — the foundation is providing $150,000 in funding over three years — they now have the resources and exposure of a national organization behind them.

"This is a real surge of energy and opportunity in British Columbia with the partnering of our organization and the support of the Kelty Patrick Dennehy Foundation," said Eric Windeler, founder and director of Jack.org. "Together we can do more good work for young people who may be struggling with mental health."

The key to Jack.org's approach is to give "young people a meaningful seat at the table" when discussing ways to remove the stigma around mental illness, Windeler said. The Toronto-based organization hosts around 150 Jack Talks a year in high schools and post-secondary institutions that are led by youth speakers. There are also 103 student-led Jack Chapters in schools across Canada — including seven in B.C. — that spearhead mental-health focused events throughout the school year.

"It means so much more when youth can relate to youth. This is where they find that common ground, and they do it in a way that makes the youth feel they can open up about it," Dennehy said.

The latest Jack Talks tour kicks off at Whistler Secondary School (WSS) on Nov. 25 before moving on to Howe Sound Secondary in Squamish Nov. 30 and a handful of other schools. (The talks are not open to the public.) Windeler is hopeful the tour will continue the momentum his organization has built in B.C. and will inspire students to launch Jack Chapters in their own schools.

"We have a big ambition — I call it my Terry Fox dream — and that is that every high school and post-secondary school should be engaging with Jack.org in some way," he added. "It's that important. You can't have student success without student well-being."

As part of the partnership, Jack.org will also take over the organization of Talk at the Top, an annual summit held on Grouse Mountain exploring youth mental illness in the Sea to Sky and on the North Shore. Scheduled for Jan. 27, it adds to Jack.org's calendar of regional summits held across Canada.