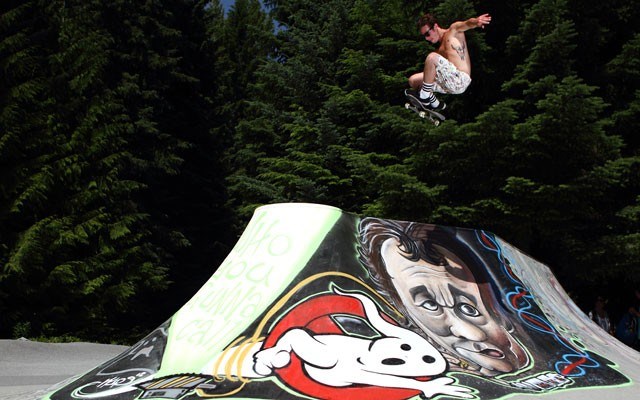 revamped park Plans for the new skate park will be unveiled on March 12. File photo by Brad SLack

The RMOW will host the workshop on Thursday, March 12 to get the community's take on Phase 3 of its Skate Park Revitalization Project plans. Designer Jim Barnum of Spectrum Skate Parks Ltd. will present his initial plans based on feedback from a similar workshop held last year.

The revitalization is aimed at complimenting the existing skate bowl and plaza, providing a high-flow street park experience that should appeal to skateboarders of all levels.

"It's comprised of a lot of street elements, like stairs, ledges, banks and step-ups, but it's all linked with elements that allow skaters to easily carry their speed," explained Barnum. "It's pretty much going to cover everybody, and that was one of the things that came out of (last year's) workshop."

Appealing to a wide variety of skaters is exactly what Chris Charlebois, owner of The Sk8 Cave in Function, was hoping to see included at the venue.

"I'd like to see a mixture of everything, from plaza-style features to more transition features," he said, noting that the current size of some park features can be intimidating for beginner and intermediate riders.

There have also been discussions around installing a covered section to protect skaters during rainy weather, a feature that more skate parks are using nowadays, Charlebois said, but that has not been included in the most recent plans. Barnum said he's willing to amend his designs to include a covered portion if there is interest and the budget allows it.

The Sk8 Cave owner would also like brighter lights to be installed along the bowl section, where there is talk of refurbishing the riding surface.

"I think it will be a positive thing for the community because it will bring people here to skate who maybe haven't come in a few years because they feel the park is outdated," he said. "The skate park was amazing back when they built it, but we've come a long way in skateboarding since then, so to see (the RMOW) put in this time and energy to bring it up to par is pretty awesome."

While Barnum said there is still room to grow the park with new features in the future, the new section should satisfy "a very large portion of the skateboarding population."

The municipality has looked at ways to incorporate the skate park plans with work currently underway linking the Valley Trail and Audain Art Museum as part of the Cultural Connector project, which will define a route through the village connecting various cultural facilities.

The capital project budget request for this project is nearly $808,000, funded through the Resort Municipality Initiative, with potential funding from partners and sponsors, as well. The project is currently being considered through the RMOW's annual budget process.

The community workshop is scheduled to take place at the Delta Village Whistler Suites, in the Raven meeting room, from 6:30 p.m. to 8 p.m.