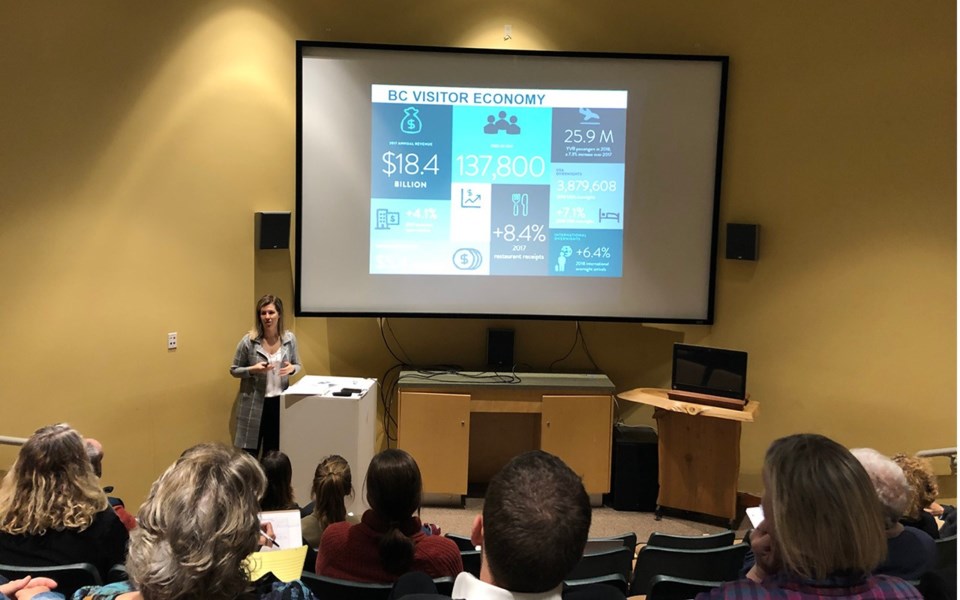 DESTINATION DISCUSSION Destination BC presented the first draft of its 10-year, Sea to Sky destination development plan at a series of community events last week, including one in Squamish, pictured. Photo courtesy of Destination BC

Destination BC (DBC) unveiled the first draft of its extensive, 10-year destination development plan for the Sea to Sky corridor at a meeting held at the Whistler Conference Centre last Thursday, March 14.

The strategy encompasses the corridor from Lillooet to the north and Deep Cove to the south, and was the result of engagement with around 1,400 partners across the province, including both provincial and local governments, First Nations, the tourism sector and community groups.

The wide-ranging draft touches on a number of high-level issues, and has identified a list of both key challenges, such as transportation and staffing levels, and opportunities, such as Indigenous cultural tourism and expanded capacity at Vancouver's international airport, currently facing the corridor's tourism industry.

For years, DBC has focused on building tourism demand, Boyd noted, but has recently shifted its emphasis to the supply side of things.

"Things we're looking at when we talk about the supply side is building new products and experiences; enhancing or building tourism infrastructure; managing business barriers, like land use or labour issues; visitor growth management; and delivering excellent visitor services," she added, noting that the Crown corporation is looking at ways to disperse visitation both regionally and seasonally.

The plan also includes 39 objectives that were identified for the corridor over the next decade, divided into eight themes. Some of the highlights from the list of objectives include: developing a corridor-wide climate-change resiliency plan "specific to tourism assets and visitor needs;" implementing "proactive visitor management" for nature-based experiences and tourism "hotspots;" developing a festival and events strategy to motivate travel; adding more backcountry and frontcountry experiences; securing more affordable housing; and supporting efforts to add passenger rail transportation from the North Shore to Lillooet and beyond.

"I think it's incredibly comprehensive, and you listened well but you also provided leadership," Fisher noted.

In the public Q-and-A session that followed the presentation, environmental advocate Bryce Leigh urged the need for the appropriate educational and enforcement measures to be in place with the expected increase in visitation to the backcountry—which, he stressed, DBC has played a role in.

"If you go to Brandywine Meadows, in some places there are 15 firepits all within a hundred feet (30 metres) of each other, and if you go by there on a sunny day, when it's 25 degrees out, they could all have fires when they're not really serving any purpose except that, to a certain extent, (DBC) continually shows pictures of people having campfires in the backcountry (in its marketing). So that myth is sort of perpetuated, and the more people we have, the more of an issue it becomes," he said.

Johnny Mikes followed that up with a comment about the ongoing lack of provincial funding for land-management, resources that he stressed should be secured before any planned major change to the landscape, such as the proposed 5 Nations Highway along the in-SHUCK-ch and Harrison West forest service roads.

"I understand why the nations in those communities would want it, but with something like that, there needs to be a tremendous amount of work and thought around what that will do to the landscape, to wildlife, wildlife movement," he said. "So it's really important that if you are making commitments to sustainability that it's not just lip service, that you lead with the planning, which has to be in place before some of this stuff happens, or we're just going to be playing catch-up."

The 10-year strategy is one of several being developed for regions across B.C., and will feed into DBC's first-ever provincial destination development strategy, expected in the spring.