Hydrogen stack will be dismantled; buses could be converted to diesel-electric
Dec 6, 2013 2:01 AM By: Alison Taylor 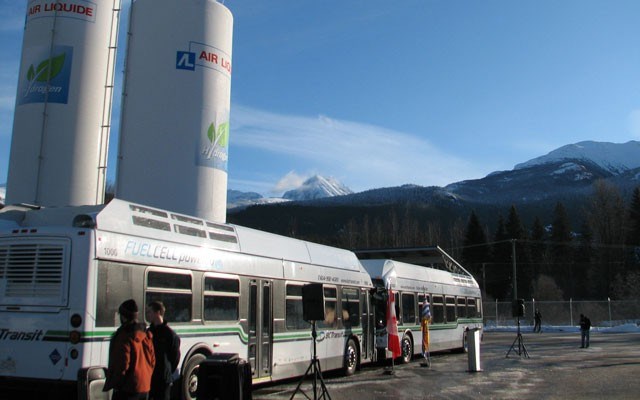 The $89.5 million hydrogen bus experiment in Whistler is officially over; diesel buses are coming back.

It's the end of a five-year hydrogen project designed to showcase fuel cell technology in the media spotlight of the 2010 Winter Olympic Games, with Whistler as the northernmost stop on the so-called "hydrogen highway" stretching from San Diego up the west coast.

That "hydrogen highway", a chain of fuelling stations along coast for hydrogen powered cars, never panned out as planned and Mayor Nancy Wilhelm-Morden confirmed Monday that BC Transit officials have given Whistler notice it will not be renewing its contract with the 20-hydrogen bus fleet when the pilot project ends in March. Clean diesel Nova buses will replace the existing fleet.

"It was an interesting experiment," said the mayor. "It didn't come at any direct additional cost to Whistler residents and taxpayers."

The decision comes as no surprise, given the high cost to maintain the buses — fuel is $2.28 per kilometre, three times the cost of diesel, and is trucked in from a production plant in Quebec. Maintenance is $1 per/km, compared with 65 cents/km for diesel buses.

"BC Transit will decide the most cost-effective way to reuse the hydrogen fuel cell fleet, including the potential to convert the buses to diesel-electric hybrids," according to an email from the Ministry of Transportation.

The Burnaby-based creators of the fuel cell technology, Ballard Power Systems, had hoped to see the fleet live on and made the case to government to that end.

"We put together a proposal for the government to run them for another five years," said Paul Cass, vice president of operations.

"Unfortunately the economics don't work out and the government is under a lot of financial constraints right now. We're satisfied with the way the project has ended up... We would have liked to have seen it go further but we understand the situation."

When asked if she thought it was a worthwhile project, Wilhelm-Morden said: "I wasn't really involved with it except just these last couple of years, so I don't really have a lot to comment on about it."

From a personal perspective, however, she said it was nice to see water dripping from the tailpipe as opposed to exhaust fumes, and she liked that fact that the buses were relatively quiet.

Former Councillor Eckhard Zeidler, who was on council when the project began, paused to consider when asked if this was a worthwhile project.

"From Whistler's perspective I think it was a worthwhile endeavour to find that hydrogen powered buses are not ready for prime-time, particularly not in the cold climate of Whistler," said Zeidler, alluding to the issues of using the buses in the hilly and chilly Whistler terrain. "And the project also proved clearly that hydrogen is not a financially viable fuel source at this stage. That's something we were aware of going into the project and that was part of the reason why there was a set date for the end of the trial."

The total cost of $89.5 million was shared by the federal and provincial governments, the Canadian Hydrogen and Fuel Cell Association and the municipality. Whistler's $16.8 million, however, was the cost the municipality would have paid for a diesel fuel fleet over the five years.

Critique of the program was swift on Facebook with one person calling it "part of the greenwash program for the Olympics" and another calling the highway and fleet "a classic case of the wool being pulled over our eyes."

Still, in a letter to Ballard Power Systems, which provided the fuel cells for the buses, Minister Todd Stone, of transportation and infrastructure, called the project an "innovation success story."

The key goals of the project, Stone added, were to evaluate hydrogen buses in daily use, encourage hydrogen technology jobs in B.C., showcase B.C. as a leader in clean energy and contribute to the province's climate action goals.

"The project has accomplished everything it set out to do," said Stone.

"Our experience with this fleet is even more extraordinary when we consider that these were new technology buses, commissioned in a very low volume, twenty-bus fleet. While this small fleet size meant that capital and operating costs were higher, I understand that it has provided a vital step toward commercialization, generating international business opportunities for this 'made in B.C.' technology."

According to its status report of the Whistler project, Ballard expects to power 40 buses in Europe by the end of next year, and 25 more in 2015. It also recently announced a licensing agreement in support of a planned fuel cell bus program for the China market — the largest bus market in the world.

Even with the transportation of hydrogen from Quebec, the Whistler fleet reduced emissions by roughly 65 per cent on a "well-to-wheels" basis, compared to diesel buses.

The report states: "The Whistler experience has supported continuing progress on several important fronts. In addition to the significant reduction in capital cost of fuel cell buses over the past five years, the public profile generated by the Whistler fleet has helped engender a positive perspective among progressive transit agencies in other parts of the world."