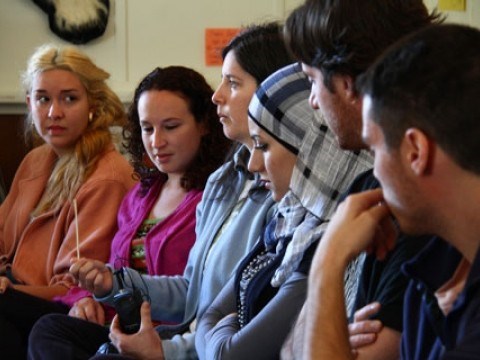 You feel a splendid isolation from traveling far enough into the Pemberton Meadows.

Beyond the Miller Creek Bridge you find yourself flanked by mountains on either side, heights that tower over sprawling valleys that are pregnant with crops such as berries and potatoes.

Hardly a soul seems to travel the Meadows Road save for the odd dirt bike rider. The only sound is the Lillooet River as it rolls thick with silt from last summer's landslide at Mount Meager.

It is here, at the Copperdome Outdoor School and Lodge, about 17 kilometres into the Meadows, that Peace It Together, a Vancouver-based non-profit, has brought 10 students each from Israel, Palestine and Canada for a series of workshops designed to provoke emotional dialogue about the Middle East, so that together they can promote peace.

Since 2006, Peace It Together has been bringing together young people from both sides of the Middle East conflict to help them connect with the "enemy" and produce short films that can be used as "peace-building" tools.

The program starts with a dialogue portion in which the participants, aged 20 to 26, are thrown into potentially uncomfortable situations and then encouraged to air their grievances with the other side. Only after they've done this are they ready to work together on short dramatic and documentary films.

Reena Lazar, a co-founder and now executive director of the organization, said she chose Pemberton as a venue for the dialogue portion of the program because it provides a peaceful setting in which to foster discussion.

"For the dialogue part, I want us to be in a fairly secluded, rural, peaceful setting with no distractions," she said. "I've been here before. I thought, 'This is the place.'"

Lazar mentions one scene in particular. The group was sitting in what's known as the "Polar Bear Room," which served as a classroom in the old Pemberton Meadows schoolhouse in the 1930s. A facilitator opened a door to the outside and in the midst of a dialogue they heard birds chirping all around them.

"It was such a beautiful sound," she said. "We're here having dialogue and you feel like you're in the middle of nature. It's just fantastic."

Chen Cohen, a recent education graduate from Kibbutz Manara in northern Israel, said in an interview that Pemberton's natural features have given the group a calmness that helps them to talk.

Mohammed Hawarin, an accounting student at Birzeit University north of Ramallah in the West Bank, also enjoyed the setting but he joked that he wished there was a supermarket around.

"It's my first experience to have dialogues with Israeli people," he said. "I think that really helps us because we share ideas and we know what the other person's thinking about and how they think about us."

In a Thursday session a facilitator remarked that some issues still exist within the group and she wanted to air them out.

One participant, a young Israeli woman, remarked that she was unsettled in a previous session when she heard another say that "Israel doesn't exist." The facilitator, taking a measured tone with the group, said that all participants must recognize there are two sides to the conflict.

Although situated a fair distance from Pemberton's town centre, Peace It Together has received community support from businesses throughout the corridor. Blackbird Bakery in Portage Station provided the group with food such as bread and muffins every day, and the Namasthé Tea Company based in Whistler provided refreshments.

"We're not that integrated into the community but as much as we have been it's been welcoming," Lazar said.

From Pemberton, where the group stayed until July 16, the group headed to the University of British Columbia where they commenced their film projects.

The films are to be screened August 2 at Vancouver's Vogue Theatre and the public is invited to attend. $21 gets you a ticket to the screenings and $100 gets admission to a meet and greet with the filmmakers afterward. Tickets are at www.voguetheatre.com and the screenings start at 7 p.m.