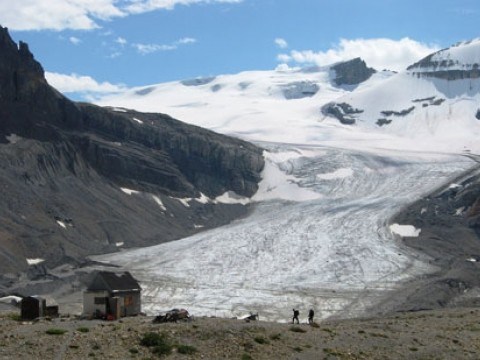 Hiking across the gravel flats where braids of water streamed like turquoise satin ribbons to fill Peyto Lake, Dr. Scott Munro passed dozens more dry grooves creasing the ground, evidence of the great amounts of water that have tumbled for centuries from Peyto Glacier four kilometres up the valley in Banff National Park.

A professor of geography with the University of Toronto's Mississauga campus, Munro had hiked the trail countless times en route to the glaciology research site perched atop the moraine at the glacier's toe since he first visited in 1971 to work on his PhD.

On that day in October 2010, however, he noticed something was amiss.

"The big boulder that was always a landmark was gone," Munro recalled. "There was dirt where there had been water. The landscape was completely changed. Something had happened and scraped off the side of the moraine. Every 100 years or so, these big events happen."

Last month, Munro was one of several researchers working on independent projects based out of the station's three small buildings. Munro's work involved dismantling and resembling weather stations, necessary to maintain his long-term glacier energy-balance studies. Situated in the ablation zone at 2,183 metres elevation, that tripod-like station has been moved up the glacier repeatedly since it was first installed in 1995. Since it was first photographed in 1896, Peyto has retreated four kilometres. Assisted by glaciology technician Steve Bertollo and field technician May Guan, Munro also re-positioned two higher sites at 2,461 and 2,709 metres.

"This lower one is the easiest to maintain," Munro said. "The highest one in the accumulation zone is the toughest one to keep going; it's high on the glacier so it's exposed to lots of high wind and rough weather. The lower ones fall over, the top one gets buried. But, Peyto is one of the best instrumented sites anywhere."

Also conducting research, Dr. Mike Demuth, the Ottawa-based head of glaciology for Natural Resources Canada's glaciology department, teamed up with NRCan colleague Mark Ednie, a permafrost specialist who maintains several sites in Canada's far north, to continue studies as part of NRCan's long-term mass balance observations at the Peyto site. Assisting them was Christophe Kinnard, a Canadian glaciologist on a break from his current position with CEAZA institute in Chile. Part of an exchange program saw Demuth visit Chile last January, the scientists compare and learn from each other's projects and methods.

With Demuth carrying a monitor in a chest harness and Kinnard and Ednie manoeuvring a radar assembly, the scientists walked slowly following a 300-metre transect across undulating rubbly terrain that comprises the moraines bordering the glacier's north side, stopping at 50-centimetre intervals to take readings. Back in Ottawa, the data will be analyzed to help determine how much freshwater may be stored in the ice core moraines which has been buried by debris that has crashed down from the cliffs above.

As one of the longest running glaciology sites in North America, where research has been continuously ongoing since the mid-1960s, the Peyto station represents not just a key component of Canada's network of studied glaciers and their associated freshwater resources, but also part of a global network. Information gathered there is shared with the UN Framework Convention on Climate Change, as well as industries including mining, hydro power operators, irrigation, tourism, ecosystem services and by Alberta Environment to make water management and allocation decisions. Parks Canada also uses the information for its mandated requirement to produce regular state of the park reports.

While most of Alberta's river flow is maintained by rain and snowmelt, glaciers are nature's reservoirs that kick in later in the summer during hot, sunny, dry weather. And, like the vast majority of glaciers the world over, Peyto is rapidly shrinking. As such, both Demuth and Munro are looking ahead to establishing new research sites on other Rockies glaciers whose stages of decline are behind those of the Peyto.

"A lot of the big signal reference sites around the world are disappearing," Demuth said. "As this place disappears though, it's an excellent place to study what's being left behind."

With numerous ice-covered moraines in the Rockies' eastern range, scientists have much to learn that is valuable on a regional and global scale.

"Canada has a lot of cryosphere - the frozen part of the earth system," Demuth said. "When the frozen stuff changes temperature or phase, those are indicators of changes in the earth's energy balance. Canada has a unique role in the world to be the canary."