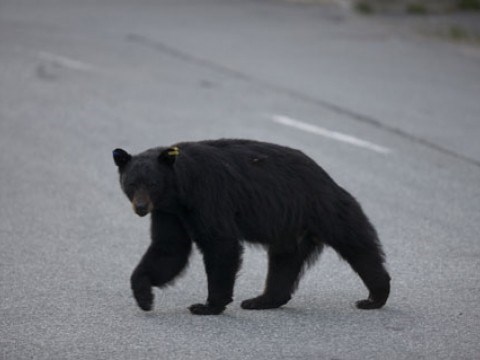 The story of a bear break-in at Fat Tony's Pizza is entertaining people around the world.

A short video clip of a bear eating pizza inside the restaurant has gone viral with one video sharing site reporting more than a thousand views after the story was picked up by the Toronto Sun , Yahoo News, the National Post , the Calgary Sun and the Daily Mail in the U.K.

The bear, tagged with a yellow ear marker, entered through the front door of Tony's Pizza Sundial Place location at about 7:30 p.m. on Monday, Sept. 26.

"It has been great publicity," Atesh Akbay, the owner of Fat Tony's said after news outlets picked up the story.

He said the bear ate four large pizzas, including a beef and blue cheese house special.

Dawn Johnson, Project Coordinator with the Get Bear Smart Society, said the timing of the incident was really unfortunate.

"The video was so disturbing to me because the patrons were so close to the bear," Johnson said. "They didn't realize they were putting themselves and the bear in danger."

Conservation Officer Chris Doyle said the mature resident male bear was relocated to the Upper Lillooet Forest Service Road after it helped itself to the pizza. He said this particular bear has been previously hazed and relocated a short distance away.

According to Doyle, Whistler will always have these kinds of conflicts with the bear population.

"It is just a matter of working and keeping ahead of the bears in being able to control the attractants," said Doyle.

Johnson agreed that Whistler residents and visitors must be vigilant in managing waste.

"It is people and businesses' actions, or inactions, that significantly impact the frequency and intensity of conflict with bears," said Johnson. "Without 100 per cent compliance in terms of securing attractants, bears will likely continue to opportunistically access human foods, regardless of holding the title as a Bear Smart Community or not."

The pizza incident wasn't an example of the cooperative living officials had in mind in recognizing the work done in Whistler to create a living arrangement in the community that works for both humans and bears.

The new designation as a Bear Smart Community means residents and visitors are addressing the root causes of bear-human conflicts and reducing the risks to human safety and private property while reducing the number of bears destroyed each year.

"Achieving Bear Smart Community status is a high point in our program, but is not the end point - we will continue to work co-operatively to further reduce human-bear conflicts," said Whistler mayor Ken Melamed after the designation was announced.

Sylvia Dolson, the executive director of the Get Bear Smart Society, said in an e-mail message that the designation is great news for Whistler. She added that her society is committed to resolving new issues as they arise.

"It is an ongoing and evolving process, but it's nice to have our progress to date recognized," Dolson wrote.

Dolson is concerned about the unusual shortage of natural food this year and she is requesting extra tolerance of bears feeding on berries in town.

According to bear researcher Michael Allen, the berry crop above 1,500 metres is sparse. Allen described this as the worst high elevation crop in the last 18 years.

Allen has predicted increased bear activity throughout the valley in October due to the failed mountain crop. He believes bears will seek lower elevation late season berries and human food or garbage.

Environment Minister Terry Lake said in a teleconference after the Bear Smart announcement was made that about 600 bears are euthanized every year in B.C. In Whistler, 915 bear sightings were reported between April of 2010 and March of this year, resulting in 43 bear hazing incidents and 11 bears destroyed.

Lions Bay was given the same acknowledgement and the two new Bear Smart communities join Squamish and Kamloops as the only four towns in B.C. acknowledged for making bear management a priority.

It has been 10 years since the last bear was destroyed at Lions Bay and the mayor of the village credits the work of village staff as one of the factors in reducing bear issues.

Mike Badry, the wildlife conflict prevention coordinator with the province's conservation officer service, said Pemberton is interested in attaining bear smart status and there are people in the community working towards the designation.