Science under the Peak 2 Peak; forestry researchers use Blackcomb to study future prospects for the whitebark pine
Nov 2, 2011 10:10 AM By: Pique Newsmagazine Staff 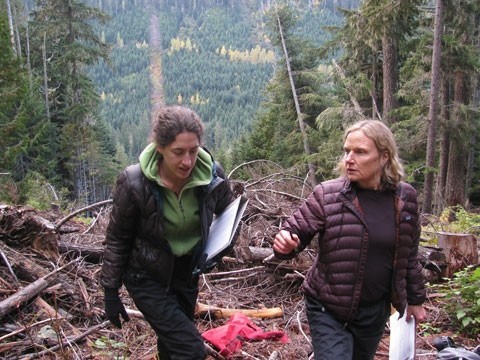 The clear-cut line underneath the Peak 2 Peak is good for more than a steep drop into Fitzsimmons Creek on a powder day - some scientists from the University of British Columbia in Vancouver are using the cleared area to conduct an experiment, studying how an endangered B.C. tree will fare in the face of climate change.

Dr. Sally Aitken and her then-graduate student Sierra McLane planted about 700 whitebark pine saplings at six sites under the Blackcomb side of the gondola last autumn. On Oct.23 they went back for the first time to see how those trees - most just a few centimetres tall - are doing. "They're faring better than I expected," said Aitken, who worried that many of the trees wouldn't have taken hold. "When you're dealing with an endangered species you just want to see them thrive."

The idea behind the experiment is to use the clear-cut strip as a sort of time machine. As anyone who has been hiking up the mountain knows, it's colder at the top than at the bottom - by about 3C on average. Decades from now, temperatures at the top of the mountain might be more like those at the bottom, as the world warms from all the extra carbon dioxide pumped into the atmosphere. So the researchers are using the bottom of the mountain as a stand-in for future climate conditions. For that purpose, the line under the gondola is perfect - all facing southwest, and with easy road access. "They were looking on Google Earth for a suitable site. All of a sudden it was like: 'Peak 2 Peak', aha!" said Aitken.

The tree they're studying - the whitebark pine - was declared endangered in Canada in April 2010. Though this tree is hardy in cold climates, it faces a number of other challenges. It relies heavily on one bird - the big-beaked Clark's nutcracker - to disperse its seeds (the researchers have nick-named their research car "bean" after the bird's latin name, Nucifraga columbiana, because they, like the bird, are spreading seeds). And the whitebark pine is extremely slow-growing - it grows only a couple of millimetres a year, which means that other, faster-growing species often crowd it out.

"Fill in the blank - any other tree can grow faster than whitebark pine," said McLane. Many of the naturally-growing whitebarks on Blackcomb have been devastated by pine beetles and an imported European fungal disease called blister rust, leaving the trees' distinctive upwards-pointing branches bare and dead. A few healthy clusters of the trees persist, including one patch right next to the Blackcomb Peak 2Peak station. These were originally slated to be cut down to make room for the gondola station, but the planners were convinced to move the station and save the rare trees. In general, Whistler-Blackcomb has a moratorium on cutting down whitebark pines.

Even though there are many spots in B.C. that have a suitable climate for the whitebark pine, it doesn't grow in all of those locations. Scientists would like to know why, and how that might change in future. It might be because the Clark's nutcracker prefers areas that host more than just whitebarks, or because of competition from other tree species. The experiment under the gondola is part of efforts to work that out, along with other plots in seventh heaven.

On Sunday, the researchers found grass growing at the lowest-elevation study site, giving the tiny saplings some stiff competition and making it hard for the researchers to even find them.

"We need a metal detector," said McLane, poking around in the grass for the metal tags that label their trees. Higher up, some trees had been washed away by snowmelt and logs falling down the slope. And at the very top the trees were too covered by snow to measure. But it was clear that most had grown, with only about 20 per cent dying or going missing.

The researchers will be coming back for years to measure these trees, to see how they fare and whether certain genetic strains, harvested from different spots, do better than others. It might be a good idea, Aitken said, to move certain sub-populations that are better suited to warmer conditions to more northern locations as the world warms.

"I'd advocate for moving trees within their current range," she said. The Blackcomb test, along with others, will help them to work out whether this kind of "assisted migration" might be a good idea.

Whistler-Blackcomb officials have been very co-operative and helpful, said Aitken, working with them to provide access to study sites.

"Some conservationists have a real problem with ski resorts," he said, because of their energy use and the way they alter the landscape. "But there's real opportunity here for research and education. Environmentalism is part of who we are."