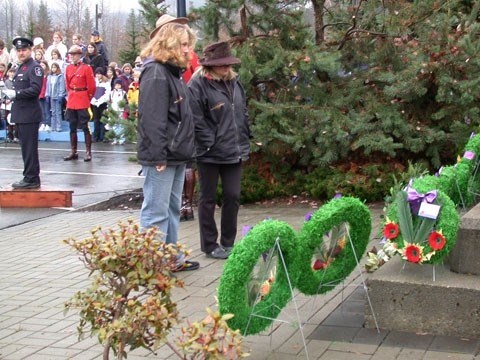 Garry Watson was a young university student in the summer of 1956, stationed in Germany with the Princess Patricia Canadian Light Infantry.

He was 22 years old, commanding an infantry platoon of young boys as part of an officer-training program through his university. World War II was a decade in the past but the Cold War was in full swing with the Canadians helping to hold the defensive line against the east in Germany. Watson remembers they played a lot of soccer, forged fast friendships, trained to fight.

Late that summer the Suez Crisis kicked up, escalating into a major world conflict over the Suez Canal. The British parachuted into the region and there was a chance that the Canadians were going to be called to back them up.

"I'll never forget, my sergeant turned to me (and asked)... 'Sir, do you think the men are ready?'" recalled Watson, one of Whistler's founding fathers.

Watson never had to go to war, never had to fire a weapon in anger or defense. The Suez Canal crisis was resolved.

But every Remembrance Day he can't help but think of the young men he trained with, and the young men before them, and after them, who had to go to war for their countries and pay the ultimate price.

"That's what I think of now, just the waste of young vital men," he said.

"They're not afraid of anything. It's that confidence of youth - that you're going to survive. And so many don't."

As in years past there will be a Remembrance Day service in Whistler to remember the thousands of Canadians who fell in the defense of freedom in World War I, World War II, peacekeeping missions, Korea and Afghanistan.

More than 66,000 Canadians were killed in the First World War and more than 47,000 died in the Second World War. More recently, 158 Canadians have been killed in Afghanistan since 2002.

And though it's usually the soldiers who are remembered most, Anne Townley lays a wreath every year for the medical personnel that served in the wars too.

Both of her parents were in World War II - her mother was a nurse in England and her father was in the tank brigade for Ireland.

"If it wasn't for all the support personnel we wouldn't be able to have a base... There's all the various different roles that all play a very significant part, some not as glamourous as others."

She puts a wreath at the base of the Whistler Cenotaph from the Whistler Health Care Centre. Sometimes she orders one from the legion and other years, like this one, she makes the wreath herself.

Linda Marshall makes a wreath every year too, for different reasons.

Marshall, who has attended every Whistler service, save perhaps one, for the past 26 years, said it's a very personal time to remember her father.

Cyril Marshall fought in both World Wars for, like Watson, the Princess Patricia's.

The second time Marshall went to war he went with his three sons, Linda's half brothers - one was in the army (Patrick), one in the navy (Calvin), and one in the air force (Bob).

"The whole family were at war together in the Second World War," said Marshall.

Her father came back with shrapnel in his knee. He was always willing to talk about the war and his experiences.

Marshall wishes now she had listened more, spent more time learning about it. Her father was 66 years old when Linda was born. He died when she was 17.

"So I lay a wreath every year for my father, and over the last 26 years, for my three brothers who have since passed away."

She has moved to Pemberton in the past year and is trying to make that community her home. She will be taking part in the service there this year.

Every year she watches the national service taking place in Ottawa on TV, which is where she grew up, and then she makes her way to the local service.

"It makes you really appreciate what we have," said Marshall, of attending the service and remembering.

"We're really lucky we live the way we live."

The Whistler service begins at 10:30 a.m. at the Whistler Cenotaph beside the village firehall - Fire Station #1.

All are welcome to attend. And to remember.