Base jumping thrill seekers find Mecca on the Squamish Chief
Jun 17, 2011 6:49 AM By: Susan Hollis 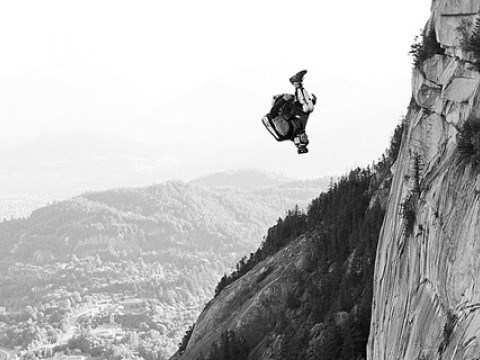 Donald Schultz is afraid of heights.

Yet the South African born, L.A.-based extreme athlete and adventure seeker regularly throws himself off of high rise buildings, sheer cliffs and mountain tops. He admits he only has a two to three minute window to do so before fear prevents him from launching. That's why he takes various pre-jump assessments of his launch sites, estimating possible complications from wind currents, overhanging cliffs, drift possibilities and landing locations. That meant two hikes up the 2,000-foot Squamish Chief before he felt conditions were right for a jump earlier this month. Originally set on jumping in a wing suit, Schultz and jumping partner - internationally recognized base jumper Sean Chuma - decided to forego the flying squirrel outfits for a straight-up base jump, which involves a running leap and free fall off the side of the Chief.

"A lot of the press and media make it come across as if we have a death wish but if something is dangerous, we just don't do it," he said during a telephone interview from L.A. "Obviously there is a certain amount of danger in what we do but if there is a chance that you're going to die, I'd never do it. I love life way too much. Base jumping is in reality a very safe sport - what makes it more difficult and dangerous is making it illegal."

While base jumping off the Chief isn't illegal, local search and rescue crews have spent time and resources rescuing jumpers who improperly calculated the risk. During the summer of 2010, two base jumpers had to be rescued by local authorities in separate incidents after failed attempts left one stranded on a cliff after being blown back into the rock face and another dangling from a parachute that became tangled half way down the Chief.

"As a resident and a police officer I think that with all high risk sports there should be a degree of responsibility for those doing them and there should be some sort of standards and consequences, both in insurance to pay for the search and rescue and all the work that goes into it afterwards if there is a problem because it definitely increases the possibility of hospitalization or recovery for all the things people expect and it's because of their own actions," said Squamish RCMP Staff Sgt. Guy Pollock. "I think anything done safely or with some sort of with safeguards in place is okay but if there is no legislation then it's a little more complicated. The sports are increasing faster than they've been able to keep up with the legislation to deal with it."

Contrary to popular belief and highly sensationalized accounts of mishaps, Schultz - who has completed hundreds of jumps in the past two years - says base jumping is not a dangerous sport. Like backcountry skiing or rock climbing, it demands a high level of education and forecasting but when done properly in good conditions, the possibility for disaster is greatly reduced.

"People are always like 'base jumping is only popular with guys who want to kill themselves,' but nothing could be further from the truth," continued Schultz, who works primarily in the film industry both in front of and behind the camera. "A lot of base jumpers are young professionals in other industries than base jumping...and they take base jumping really, really seriously. It's not throwing their life away, it's a responsible sport just like rock climbing - we were being shown around by local rock climbers and there are a lot of similarities between the two groups - environmental pressures affect us both and we have similar outlooks, it's very cool - both groups of people are nature lovers."

Some scientists hypothesize adrenaline junkies crave the same high alcoholics and drug addicts seek, but find it through other means. Schultz says his extreme roots come from growing up poor in South Africa, where he and his friends would invent ways to have fun for free - like catching cobras and swimming with sharks.

"The interesting thing is the lead up to any of these things is the worst, but once you're doing it it's very calming and a huge release," he said. "It's the walking up to the ledge that's the scary part."

If Schulz had managed to complete a wing suit jump, he would have extended his airtime by three to four times the regular fall time of a base jump. He plans to return to Canada to give it another go this summer.

"It's not really flying, it's gliding," he said of the difference. "In an average sky dive you free fall for 50 seconds. In a wing suit you can free fall for three minutes. It changes the game a lot."

Schulz had only been to Canada once before his most recent west coast trip, a quick and unmemorable jaunt through Toronto. He was captivated by Vancouver and the Sea to Sky corridor and said he found kindred spirits in many of the people he met along the way.

"The Squamish climbing and base jumping community really pulled together and reached out to help us, they were so knowledgeable about the land and the rock and the wildlife, it was great," he said.

"I love it out here, especially how close all of this is to Vancouver - it's incredible."

He will return this summer for another base jump attempt or two. Schultz and his team contacted Whistler Blackcomb to see if a Peak2Peak gondola base jump would be possible this visit but were refused. However, he plans to speak to officials again about another attempt when he returns in the summer.