Original owner arrested after stealing the dog from adoptive family in Saanich
May 2, 2013 2:15 AM By: Andrew Mitchell 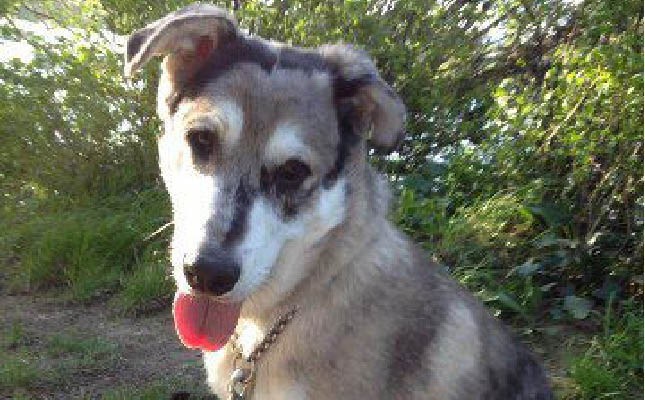 STOLEN DOG RECOVERED George was stolen from his adoptive family by his original Squamish owner, who abandoned the dog after allegedly being involved in at least one break and enter. Photo courtesy of Saanich police

George, an eight-month old Husky, has become embroiled in a police case that ranges from the In-SHUCK-ch forest service road to the Victoria suburb of Saanich on Vancouver Island, and involves both Whistler Animals Galore (WAG) and the B.C. Society for the Prevention of Cruelty to Animals.

A 30-year-old Squamish woman has been arrested and is facing charges of possession of stolen property and break and enter after allegedly taking the dog from its adoptive family in Saanich on April 23. The family adopted the dog from the Victoria SPCA a week earlier, but George was previously in the possession of WAG after Whistler and Pemberton RCMP handed him over to the organization.

The police originally acquired the dog after a resident reported a break-in to his cabin, and three other cabins, about six kilometres up the In-SHUCK-ch forest service road. The complainant gave chase to the suspects, who hit a vehicle in the Mt. Currie area and ran off on foot. The suspects in the break-ins abandoned George in the car while they fled the scene.

The police brought the dog to WAG for safekeeping. Shannon Broderick, WAG's executive director, said she and her staff were familiar with George, originally named Timber.

"While (George) was living in Whistler (the owner) was known to us basically because the bylaw officers kept bringing him in," said Broderick from her office at WAG. "He was found stray, he's been wandering in the park all on his own. We knew the dog and we knew her."

Broderick said that the woman at the centre of this story posted a rant on Craigslist complaining about WAG. The post includes a number of photos of herself and the dog. She has claimed that she rescued George from Mount Currie along with 12 other dogs.

"WAG stole my dog... and for no apparent reason... personal hatred?" the woman posted on Craigslist.

That isn't how Broderick sees the situation.

"This was his fourth time being impounded," Broderick said. "Obviously this was a bit of a different situation because he was brought in by police. In my opinion he was abandoned in the vehicle."

The dog was held by WAG for the final time over a period of four days. Broderick said the woman was given until 6 p.m. on April 9 to claim the dog and when the deadline came and went arrangements were made to move the dog into the custody of the Victoria SPCA.

Broderick said the original owner, a suspect in the break-ins, tracked the dog to its adoptive family with the help of a lawyer.

She then watched for an opportune time to steal the dog from its new adoptive family in Saanich. The local police then alerted the Squamish RCMP once the theft was reported and the woman was arrested in Squamish at 6:30 p.m. on April 23.

The BCSPCA is conducting an internal investigation to discover how the suspect learned private details of the dog's adoptive family, which allowed the suspect to track George to Saanich.

Staff Sergeant Steve LeClair confirmed on Wednesday, May 1 that the police were continuing to investigate the cabin break-in, and anticipate laying charges against suspects in the near future.

The adoptive family declined to take the dog back for fear of another confrontation with George's former Squamish owner.

-with files from John French-