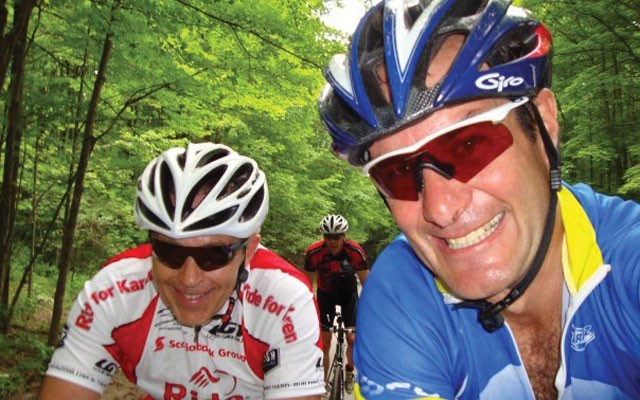 Whistler cyclists Kelly Blunden, left, and Ross Chafe, right, were killed in a highway accident near Pemberton on May 31. File photos

Samuel Alec, who was charged last week in the highway collision that killed three people near Pemberton in May, appeared at a bail hearing on Monday, Aug. 17.

The 43-year-old Lillooet man was arrested on Friday, Aug. 14, and has been charged with three counts each of criminal negligence causing death, impaired driving causing death and driving over the legal blood-alcohol limit. He was also charged for failing to remain at the scene of the accident.

Details from the hearing in North Vancouver court cannot be reported due to a publication ban.

The crash claimed the lives of Whistler's Kelly Blunden, 53, and Ross Chafe, 50, who were biking down a stretch of Duffey Lake Road about 25 kilometres north of Pemberton on May 31 when they were struck by a vehicle. A passenger in the car, the Lil'wat First Nation's Paul Maurice Pierre Jr., was also killed.

"This was a very challenging and complex investigation that utilized numerous resources from several specialized and integrated support programs which culminated in the arrest of the accused, Mr. Samuel Alec," stated Lower Mainland Traffic Services' Inspector Michael Labossiere in a release.

"This was a true coordinated effort and I would like to thank all those involved in the investigation as this investigation was only successful through their dedication to duty, hard work and professionalism."

Lower Mainland Traffic Services led the investigation, with support from the Whistler, Squamish and Pemberton RCMP detachments as well as the Stl'atl'imx Tribal Police, the Integrated Collision Analyst and Reconstructionist Services and the BC Coroners Service.

The Whistler Cycling Club (WCC) — which Blunden and Chafe belonged to — has pushed for increased road safety and education measures in the wake of the accident. The club has presented a list of recommendations to Whistler's council, and worked with municipal staff on updating the community's road cycling safety brochure. It has also forwarded a letter to MLA Jordan Sturdy.

"The club and the broader cycling community have mourned the loss of Kelly and Ross as well as the passenger in the vehicle, now my hope is there will be some lasting legacy to this loss," said WCC president Frank Savage.

Details from the crash have remained scarce in the weeks since the triple fatality. Police noted no further information will be available at this time, as the matter is before the courts.

According to court documents obtained by the CBC, Alec's license was suspended at the time of the accident and he had been convicted on drunk driving charges three times in the past.