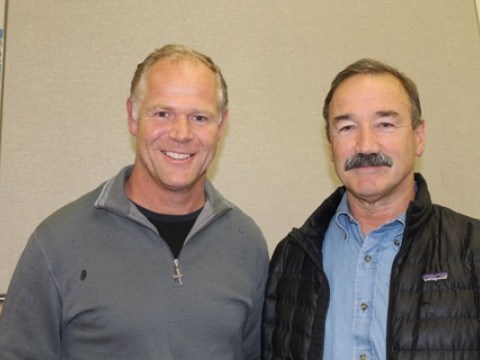 They're the All Blacks of the council candidates - a team of two well-known Whistler Kiwis looking to secure seats in November's election.

Duane Jackson and Roger McCarthy, both of whom have deep roots in the community, are running together as a two-man slate because they have common goals and a shared positive outlook on Whistler's future.

Whistler, they say, is at a crossroads.

There's a new administrator, Mike Furey, now heading up the municipality, and while he brings extensive knowledge and skills from his years at the province, he also needs help understanding Whistler's unique follies and foibles.

"He needs a council that can turn up and understand how this place works so that we can get to the issues sooner," said Jackson. "We haven't got time for a learning curve.

"We've got the experience and the background and the discipline to be able to ask the questions."

Both want to work with Furey and evaluate the recent service and organizational review, which is expected to be released in the coming weeks. They also want to create a plan that addresses the concerns and priorities of business and the environment.

Jackson, a partner in the Stonebridge development, brings his experience at the local level to the job, including his years on the board of the Whistler Housing Authority and the Whistler Development Corporation, which oversaw the $160 million Olympic athletes' village housing project.

McCarthy, on the other hand, rose through the ranks at Intrawest starting as a Whistler patroller. He brings a broad worldwide view of resorts to the table.

In 1991 he became general manager of the then-bankrupt Mont Tremblant Resort in Quebec. Less than five years later it was the number one resort in eastern North America. Critical to that success was believing it could be number one and keeping that belief top of mind, he said.

Whistler must do the same.

"The key thing is we cannot sit still," said McCarthy. "We have to continue to evolve."

There's a lot of opportunities out there, he added, leading edge stuff that goes on in this Mecca of skiing and mountain biking.

Crucial to it all is putting heads in beds.

"If you fill the beds, everything works," said McCarthy.

McCarthy was senior vice-president of operations for six Intrawest resorts after Tremblant, followed by several other senior positions in the company. Most recently he was working in Sochi, Russia, developing the ski area for the 2014 Winter Olympic and Paralympic Games.

He has a small consulting business now, based out of Whistler.

"Every time there's a tough period, something grows out of it," said Jackson. "And when it gets tough, you've just got to get on with it.

"It's time to get to work and get involved and be positive about the possibilities because everything's there... it's just a matter of managing it."

Escape Route founder Jayson Faulkner, meanwhile, admits he doesn't have all the answers. He doesn't claim to.

But he does want to get to the council table to start to help figure out the intricate puzzle that has become Whistler and the municipality's role in it.

"Until you peel back the layers of the onion, some of the things that you're absolutely certain are the truth are in fact not the reality," said Faulkner,

He doesn't have a bone to pick, no beef about what's going on at municipal hall, no agenda against the current council.

Faulkner just feels he has something to add to this community that he has called home since 1977, his whole adult life.

"What I do think is that I've got a voice to contribute," said Faulkner, who is best known as the guy who started the Escape Route, the go-to store for climbing, hiking and skiing gear in Whistler.

"Many of these decisions were made in an environment and an atmosphere where there was a heck of a lot of money flowing around and the perception, short-sightedly so, was 'oh yeah, we can afford it,'" said Faulkner.

"Quite clearly we're in a different time and place now than we were three or four years ago."

The municipality is facing declining revenues and increasing costs that keep popping up, whether it's the continuing shortfall in the pay parking strategy to additional lawsuits - there are several outstanding legal claims ongoing.

"Taxes are just not an option," he said, as a way of increasing revenue, and it doesn't look as though there's any additional monies coming from the federal and provincial governments.

As he sees it, Whistler has to live within its means.

He said his experience in the private sector would stand him in good stead.

Not only does he know deeply about the ebbs and flows of a small Whistler business, he was also the vice-president of sales and marketing with Arc'teryx and worked to build the company from 30 employees in 1994 to more than 300 employees and in excess of $40 million in sales when he and his partners sold the business in 2002.

"I feel that the ideal council going forward will be made up of people with a real understanding of the context in which we now find ourselves," he said. "In other words, through the lens of the history of how we got here."