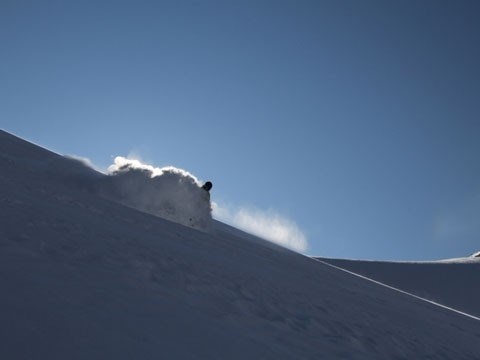 Safety first is the order of the day as Whistler Mountain continues operations and Blackcomb opens this week.

Whistler Blackcomb (WB) Operations have warned that while there has been recent heavy snowfall and more on the way, the mountain is still experiencing early season conditions.

"No one was trying to win any Darwin awards.

"We didn't pull any passes whatsoever."

Skiers and snowboarders looking to go beyond the temporary boundaries should be equipped for self-rescue and travelling in groups. People going beyond boundaries are advised that passing an avalanche closure, or traversing under it, will result in their passes being revoked.

For those looking to access Garibaldi Provincial Park to the Musical Bumps area, WB has advised that touring through the Symphony Bowl area from the base of Harmony is no longer allowed if avalanche closure signs are in place. This privilege was suspended indefinitely after people were repeatedly hiking into avalanche control zones in Harmony and Symphony Bowl. Access to Garibaldi Provincial Park is still available via the Singing Pass Trail.

Whistler Mountain opened a week early on Friday, Nov. 18 to the delight of hundreds of locals and visitors alike. Five lifts were opened for Whistler Blackcomb's winter kick off; Village Gondola, Creekside Gondola, Emerald Express, Big Red Express and Franz Chair. All lifts ran smoothly, with only the occasional stop on the Village Gondola due to excited guests getting their backpacks caught in the cabin doors.

As much as 29-centimetres of new snow fell in the 24 hours leading up to the opening, greeting skiers and snowboarders with powder conditions.

Some eager teenager camped outside the Whistler Gondola building from 10:30 a.m. Thursday to make sure they were first in line.

"I'm going to do opening day like this every year, no matter what the conditions," said an exuberant Malcolm Watson, 16.

"We're at the front, everyone else is behind us and we get to ski first" he said.

They slept in tents and stayed warm with electric heaters powered by long extension cords. About an hour before the official opening, their parents came to collect all the equipment and brought them breakfast.

Freeskiing legend Mike Douglas greeted the first guests at the top of the Whistler Gondola. He spent the five days leading up to Whistler's opening camping in the patrol shack atop Whistler Peak as part of Whistler Blackcomb's Embedded daily video series.

The Canadian Avalanche Centre has announced that they are now updating daily avalanche conditions in 12 regions, up from seven in the past. Splitting some regions into smaller segments has allowed avalanche forecasters to provide more precise travel advice to recreational backcountry users.

The Alpine Club of Canada (ACC) will meet on Monday, Nov. 28 from 6:30 p.m. to 8:00 p.m. at the library to discuss winter backcountry trip plans and projects. Members of the ACC are able to attend avalanche transceiver practices and backcountry navigation clinics, as well as participating in backcountry ski trips. Membership costs $40 per year for adults and $69 per year for families.

Blackcomb Mountain will open today as scheduled. At time of publication, 130 cm of snow had fallen in the last seven days.