Opening weekend bookings on par with five-year average
Nov 28, 2008 5:49 AM By: Andrew Mitchell 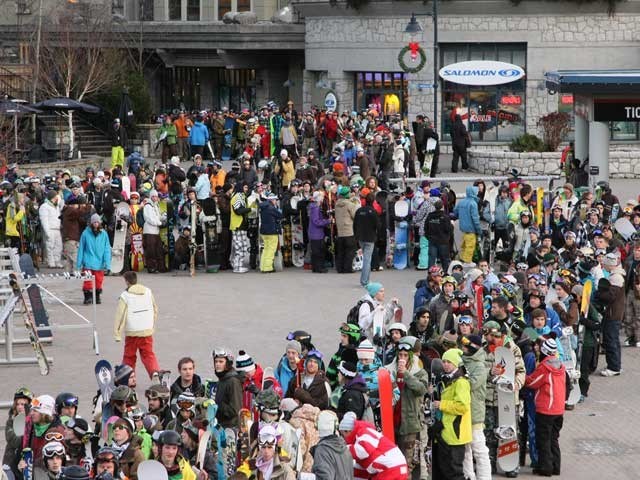 Fine Line The lineup for the Whistler Gondola on opening day snakes through the village to the Pan Pacific. Photo by Justa Jeskova, www.coastphoto.com

While the economic crisis looms over the tourism industry, Tourism Whistler has some good news to report for the start of the winter season.

Whistler.com saw its second busiest day ever on Nov. 15, the last day of the resort’s Book Early and Save promotion. As well, the week leading up to the deadline was also the busiest week for the booking agency, which is co-owned by Tourism Whistler and the Resort Municipality of Whistler.

As well, bookings for the U.S. Thanksgiving long weekend, opening weekend for Whistler-Blackcomb, were down just nine per cent over last year, when the snow conditions were far better than average. However, they are on par with the five-year average for bookings at the beginning of the week, and the most recent figures were taken before Whistler-Blackcomb announced plans to open a day early.

Overall, the resort is still expecting business to decline between nine and 12 per cent over last season, but some factors, like the exchange rate and lower gasoline prices, are working in Whistler’s favour.

“We’re clearly seeing positive results and visitors responding to the excellent value we’re offering in a significant way,” said Breton Murphy, manager of corporate and member communications for Tourism Whistler. “We’re still forecasting declines of minus nine to minus 12 per cent over last year, but the context shows us that the approach we’re taking is having some traction. We’re getting good results when it comes to focusing on value offers.”

A new promotion that replaced the Book Early and Save deal, and was targeted to the regional and short haul U.S. market, is also seeing strong pickup. The 2 for $200 promotion offers visitors two nights of accommodation and two days of skiing for $193. In U.S. dollars that works out to less than $75 per day.

“An important message for U.S. visitors is that the exchange rate is about 20 per cent right now, so they’re looking at even bigger savings relative to what they would have spent last winter,” said Murphy. “Being able to speak to reduced gas prices and a more favourable exchange rate has definitely helped us, particularly in the Washington area and in California.

“There is a misperception that we were switching everything over to focus on a few markets, but our focus is still very broad in our key markets and we’re not abandoning them. We are making sure that we’re emphasizing the regional market, however, and particularly core skiers, or those who are likely to travel this winter. It’s not that (core skiers) are going to travel less, we’re just expecting their spend to be less and that they’ll come for fewer days.”

And while snowfall is less than its been in recent years, especially at lower elevations, Tourism Whistler is working to get across the idea that snow has been falling in the alpine and that snowmaking operations have been going full speed ahead in recent weeks. They are also pointing out that snowfall in November is on par with the average for the month, even if most of that snow at lower elevations has already melted.

Though there have been a few weather stories in the media that Murphy says have been harmful to the resort, he said most stories emphasize the fact that Whistler is opening earlier while other resorts in the region will remain closed.

“I was on the bus this morning (Wednesday) and saw everybody with their gear heading to the lift, and I saw pictures of this huge lift line at the Whistler gondola, and it just reminded me how lucky we are,” he said. “Of course I was a little bit jealous as well, but it’s a big thing for us just to get the season underway.”

He’s also expecting a lot more coverage in the next year, after Whistler played host to a briefing of media representatives from around the world who were touring Vancouver and Whistler in advance of the 2010 Olympic Winter Games. Some news outlets have already written stories, while others are planning to return over the next season to cover test events, the one-year countdown, and the Games in general — publicity that Whistler would not have had without the Olympics, says Murphy.

“The additional exposure we’re getting is significant, and it’s all related to 2010.”