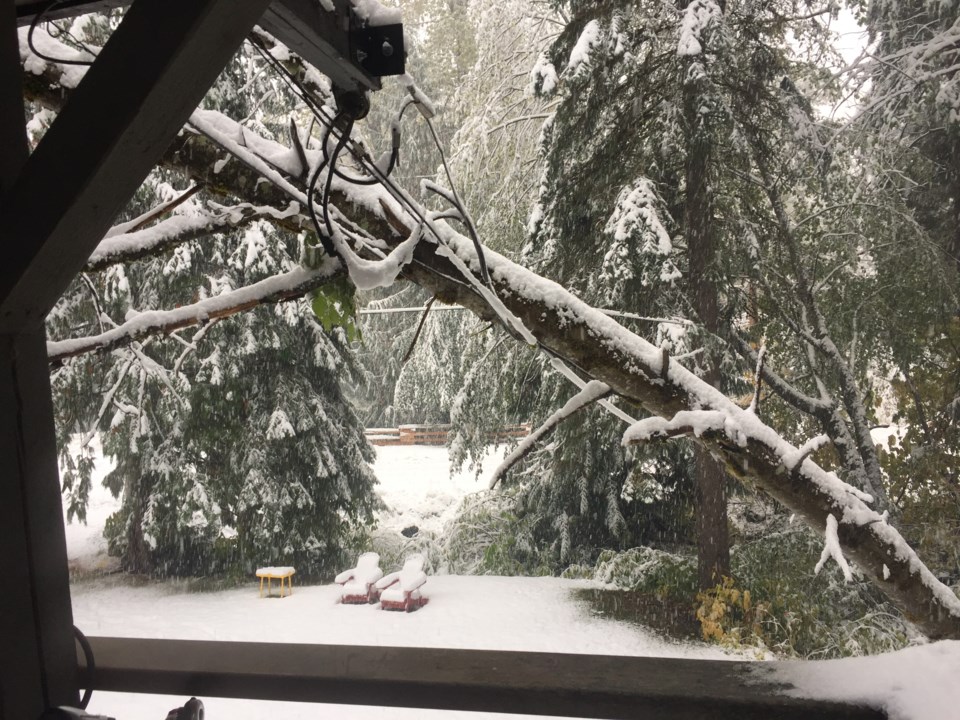 DOWN AND OUT Heavy snow falling on big leaves led to fallen trees and power outages throughout Whistler on Wednesday, Oct. 18. Photo by Alison Taylor

Wednesday's snowstorm knocked trees onto roads and power lines, leaving some 4,100 Whistler-area residents in the dark.

"We had crews out there into the day and into the night, working on the restoration work," said Tanya Fish, a spokesperson for BC Hydro.

"We've certainly had early season snowfalls," said Whistler Fire Rescue Service Chief Geoff Playfair. "What made (this storm) a little bit unique was the leaves hadn't come off the trees."

That made for big landing pads for the thick snow, leading to the downed trees and branches, Playfair explained.

Whistler received 46 millimetres of precipitation, according to Government of Canada records.

The amount of snow that fell caught workers off guard.

"The weather forecasting didn't call for the amount of snow we had. Both highways and our municipal road crews were anticipating a dusting of snow that was going to transition to rain. And that didn't happen," said Playfair.

Another big issue was slip outs by cars without proper winter tires.

"If you're not prepared, don't go out there," said Playfair.

People should be more vigilant about when they hit the road; if the conditions aren't favourable, avoid going out, said Playfair.

Whistler RCMP were also dispatched to assist with clean up efforts.

"We went to the first downed tree, then we cleared it, and sort of cleared the highway as we went along," explained Whistler RCMP Staff Sgt. Paul Hayes, who added that it is now mandatory for drivers to use winter tires.

Passenger vehicles must be equipped with winter tires between Oct. 1 and March 31 on most B.C. highways, including the Sea to Sky.

Both Playfair and Hayes expressed disappointment with some road users.

"There were a number of incidents where people were upset or concerned we were closing the highway to remove safety obstacles," said Hayes.

"We make the duration as short as possible so the community can get moving again."

Wednesday's storm came on the heels of fall's first major storm, which swept across much of the province on Tuesday, Oct. 17, knocking out power to around 140,000 customers.