Earthquake felt in Sea to Sky 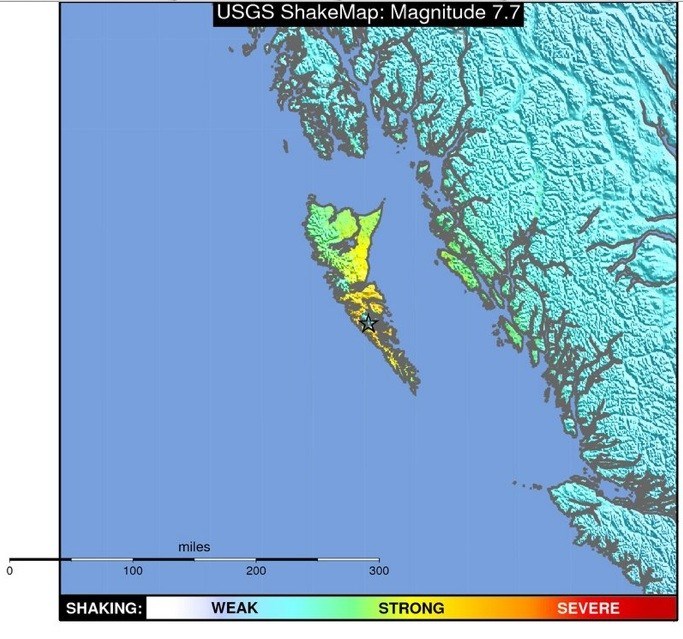 TECHTONIC TROUBLE The U.S. Geological Survey provided this map of the earthquake zone on the northern coast of B.C.

While residents in places like Tofino, Sandspit and Haida Gwaii were heading for high ground a few Sea to Sky corridor residents reported seeing or feeling minor signs of an earthquake Saturday night.

The earthquake centred on Moresby Island in the Haida Gwaii region registered a magnitude of 7.7 at 8:04 p.m., according to the U.S. Geological Survey. Natural Resources Canada (NRC) assessed the quake at magnitude-7.1 followed by numerous aftershocks as large as magnitude-5.3. The original quake was reportedly the second largest earthquake in Canadian history.

U.S. Geological Survey offered a tectonic summary on its web site. The organization reported the quake resulted from plate movement along the boundary between the Pacific and North America plates.

“At the location of this event, the Pacific plate moves approximately north-northwest with respect to the North America plate at a rate of approximately 50mm a year,” reported the American science and research organization.

The Pacific Plate is slowing slipping beneath the North America plate.

The earthquake prompted a tsunami warning for Hawaii and the western coast of North America but no significant wave damage was reported.

The worst damage from the quake was reported close to the epicenter where groceries reportedly fell off shelves at stores and pictures were rattled off walls in some homes.

The U.S. National Oceanic and Atmospheric Administration reported an aftershock the next morning at 9:17 a.m. that registered magnitude-5.1 near Sandspit. California shook with a magnitude-3.9 quake Sunday morning as well. The shaking was reportedly felt in downtown Los Angeles.