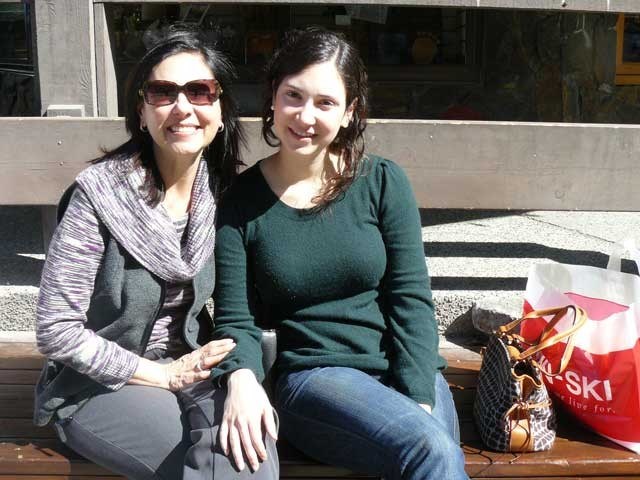 Adriana Garza and her daughter Carola take a break from skiing with some shopping in the village during their Easter holidays in Whistler.

Adriana Garza is celebrating her birthday a long way from home this year.

Like hundreds of others in Whistler this week, Garza has travelled from Mexico, Monterrey to be precise. She is visiting with a party of 11 and they've come to ski and to shop and to just generally have a good time.

"Well, it's gorgeous," said Garza of Whistler during her first visit. "The mountains are very beautiful."

Though Mexicans make up just one per cent of Whistler's visitor share, it seems like more this week as Spanish-speaking voices could be heard from one end of the village to the other.

This is Semana Santa, or Easter Week. It's the time when Mexicans traditionally flock to Whistler for a ski holiday, taking advantage of their two-week annual break over Easter.

"But it's long been identified by Tourism Whistler as a secondary market with potential for growth.

"I think Mexico exhibits the hallmarks of an emerging market."

Some of those hallmarks, McDonald explained, are a growing middle class, and an increasingly easy way to travel between the two countries.

Garza, for example, has no complaints about her trip, a flight which stopped over in Dallas before continuing to Vancouver.

Tourism Whistler is now working on a marketing campaign with the Canadian Tourism Commission, Tourism B.C., Tourism Vancouver and Visa Mexico designed to drive sales this summer. McDonald could not reveal the details of that campaign, which is set to roll out its first phase in May, but it will include Whistler's newest product, the Peak 2 Peak gondola. The second phase of the campaign will roll out in September for the winter 2010.

That campaign is designed to combat "Olympic aversion" and convince Mexicans that winter 2010 will be a great time to visit Whistler.

This week, 60 rooms, or 10 rooms per day, were occupied by guests traveling from Mexico. And while that doesn't seem like a lot in a hotel of 550 rooms, public relations manager Lynn Gervais said the market is key.

"It is definitely an important market for us," she said.

Mexicans, she added, tend to travel with their extended family, including grandparents and kids, so it's a family-oriented market.

"We definitely feel the influx of our Mexican guests at this time of year," said Otto Kamstra, general manager of the ski and snowboard school.

"They love the hospitality of Whistler and that seems to bring them back again and again."

Whistler Blackcomb has been aggressively recruiting Spanish-speaking instructors from Argentina and Chile to communicate with its Mexican guests.

"That's why we bring them over," said Kamstra, adding that they're also great pros.

Even with 50 on staff right now, Whistler Blackcomb is still short this year.

Taking a break from skiing on her birthday, Garza is convinced they will come back to Whistler.