Eating the bones in Beijing 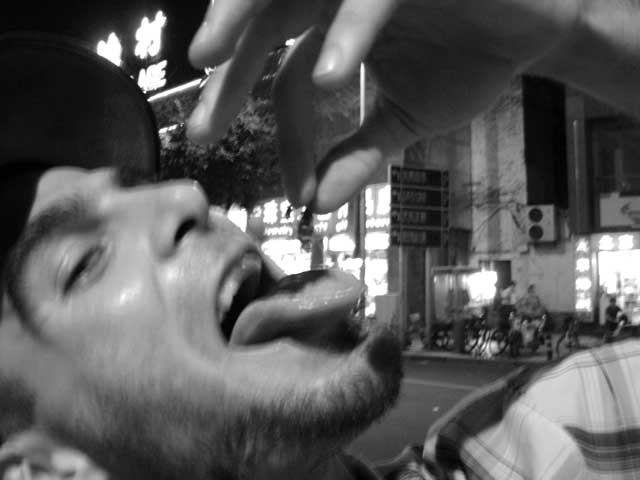 The stomach — it’s a beautiful thing, a necessary pullover off the internal highway that starts with your mouth and ends with your ass. And what it lacks in aesthetics it makes up for in function. Think of it: you grab something from the outside world, shove it in your mouth, chew it to pulp and send it chugging into a vat of combative acids and enzymes. It leaves this vat stripped of all nutrients, rejoining the exterior as a stinking, sometimes amorphous blob. And you’re stronger for the exercise. Now think about that: If you eat certain parts of the Earth, you become more powerful. Boggles the mind, doesn’t it?

Jim Barnum loves his stomach. I bet he’d like another one. In fact, I bet Jim Barnum would be the happiest cow on the farm, just steadily filling his four vats with the finest grass in the pasture. But he has to make do with only one — and that’s kind of sad. Like, imagine you knew this guy who could play a mean guitar, just a sick lick aficionado, but he had no strumming hand. That’s sort of what it’s like to watch Barnum eat. As with many things in life, there’s tragedy in Barnum’s glory.

Me, I puke a lot. My stomach is no Barnum barracks. I puked twice in a week while in Beijing. First time, I was eating an artichoke. It was a formal lunch, and I was trying to wrestle this thing down, this disgusting thing that was suddenly not an artichoke at all. It was crunchy, scratchy, and putrid — scrutrid, if you will. With diminishing professionalism, I had to rush through this labyrinthine restaurant in search of the bathroom, a friendly Chinese escort helping me along, probably getting a thrill out of my trauma. I threw open a stall door and tossed up the fauxtichoke, gasping for air and looking rather pale.

When I got back to the table and examined a similar piece of food, it became obvious that it was a duck foot, all webbed and pallid, talons and bumpy skin. Barnum, meanwhile, was chewing by the plateful.

Naturally, I’m stoked he accompanied me to one of Beijing’s outdoor food markets. With us was Paul Morgan, intrepid traveler and, on account of his four years in Taiwan, a slick speaker of Mandarin. Knowing better, he would not participate in the following experiment. Rather, he took pictures and offered moral support. The experiment? To eat weird stuff in the interest of completely disposable journalism.

The market was a crazy place, all elbow-to-elbow, camera-to-camera, vendors screaming at you — and menu boards with truly bizarre entries, like sheep penis and kidney, snake, silkworm and scorpion.

The vendors were sociopaths. Manipulative and cunning, their sense of self grand beyond measure, a market vendor will fleece you with neither guilt nor remorse. You are an ideal victim, a willing participant in this wicked enterprise.

Take this one dude. He grabbed a bottle of Tsingtao beer out of my hand and ripped the cap off with his teeth. Then he started ranting and raving, jabbering Mandarin madness and sucking back a quarter of my beer in the process.

“This guy is crazy,” said Morgan — and he was right.

Just the same, we bought a grilled snake from him. I was on deck, and, seeking redemption for my duck foot mishap, I bit the head off this twisted black serpent. A mistake, as it turns out. The skull cracked open, and the thing’s brain sort of plopped onto my tongue, a horrible sensation that made me puke on the street.

But Barnum is all mad balls, and, unfazed by my reaction, he tore into the snake’s body, look of glee splashed all over.

“It kind of tastes like chicken,” he said. “Try it again.”

Truth. This snake wasn’t no thing, really, just an elongated chicken with no limbs and cold blood. And so what if I got its juices all over my beard and face? Big deal. We were so nonchalant about the whole thing that we came up with a scale by which to measure all other entries: The Tastes Like Chicken Scale.

“Now you’re getting scientific,” said Morgan — and he was right.

The snake ranked an eight on The Tastes Like Chicken Scale.

Moving down the rows of tables and the flailing cooks standing guard, we came across a salamander, a whole bunch of them, actually. It was Barnum’s turn to eat the bones. He held the thing up to his mouth, hesitated only briefly, then tore its head clean off. Champion though he is, he pulled a bit of a face.

At this point, we began to wonder if locals ate the skulls. Something about it seemed wrong. Mentor Morgan advised us of our stupidity, summing it up something like this: “You don’t chew up the breast plate of a turkey, do you? The Chinese aren’t that different than us.”

Next up, scorpions, by far the tastiest surprise in the market. Barnum just threw his head back, plucked a scorpo off a skewer and tossed it in his mouth. Most hardcore.

“That’s tasty with the spices,” he nearly screamed. “Exoskeleton and pepper!”

He was stoked, but then he stung himself, proving some dishes don’t go down without a fight. “I broke the skin,” he cried.

Maybe so, maybe so. But, injuries aside, Barnum emerged from a week in Beijing as my eating-weird-shit hero. At the end of the week, he continued his sojourn with a mission to Shanghai, where parasites finally pierced the fortress of his stomach. Sickness ensued, sure, but Barnum remains undiminished in my esteem. He is a true eater of the Earth.

See, you can do all kinds of stuff when you travel. You can barricade yourself behind the safe and secure walls of some resort, thus ensuring you will have nothing nearing a foreign experience. You can shun that route and dive into a country’s history and people, probably the most satisfying way to go. Failing all that, you can step up and fill the void left by other North American stereotypes, the kind of people that eat mostly disgusting things for the benefit of slideshows they’ll later use to bore their friends. It’s a wonderful world.