First of five all candidate debates held at Whistler Secondary
Oct 3, 2008 6:22 AM By: Andrew Mitchell 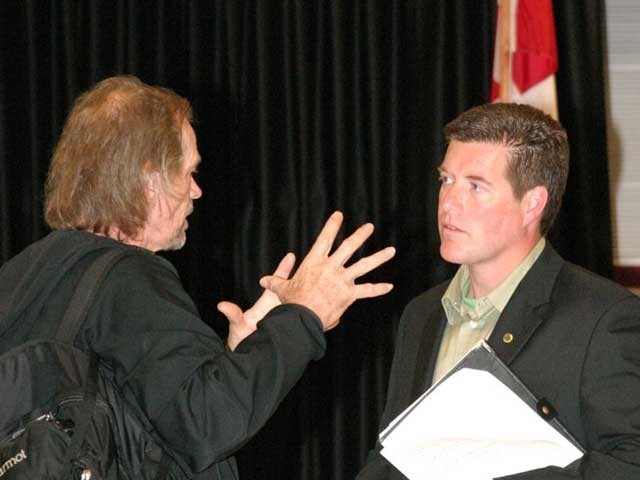 When Voters Attack Green Party candidate and MP Blair Wilson listens to an animated voter during the first of five all candidates debates at Whistler Secondary. Photo by Mike Mills, coastphoto.com

Whether you vote for parties, people, or principles, the four candidates in the West Vancouver-Sunshine Coast-Sea to Sky Country riding gave Whistler residents a lot to consider heading into the Oct. 14 federal election.

At an all-candidates meeting on Monday, Sept. 29, hosted by the Whistler Chamber of Commerce, voters had a chance to meet the candidates and ask questions.

The event was moderated by Mike Mills, with each candidate getting three minutes to introduce themselves and two minutes to sum up at the end of the meeting. During the main part of the discussion members of the audience — roughly 65 people — asked questions from the floor, while Mills asked written questions submitted by voters before the meeting.

The first questions related to infrastructure funding, Canada’s debt, and affordability in the riding, and the candidates used the opportunity to discuss their economic platforms.

Green Party candidate Blair Wilson used the opportunity to take a shot at Conservative Finance Minister Jim Flaherty for taxing “royalty trusts”, and not cutting the capital gains tax. He said the Green Party would raise GST by one per cent, and use a resulting $6.5 billion each year to invest in green infrastructure.

Conservative candidate John Weston credited Prime Minister Stephen Harper for Canada’s relative economic stability, and the fact that Canada was the only G8 country to post a surplus last year. He also pointed to 29 tax cuts brought in by Harper that have given Canadians back $20 billion in the past two and a half years.

“We believe that putting dollars back in the pockets of citizens is more powerful than putting that dollar in the pock of a government bureaucrat,” he said. He also said that Wilson, when with the Liberal Party, voted against $150 million in infrastructure improvements for the Olympics.

On the affordability issue, Weston pointed, again, to Harper’s tax cuts and a higher threshold for taxes that made it possible for 700,000 more low income earners to pay no taxes last year. He also pointed to the $1,200 universal child care benefit available to families, as well as the $500 tax credit to participate in sports programs.

NDP Candidate Bill Forst said he wasn’t aware that he had any more money in his pockets, and suggested that most of the benefits from Conservative tax cuts went to corporations instead of people. He compared $50 billion in tax credits to industry on a per capita basis to the $700 billion bailout requested by Wall Street to help with the economic crisis, and said the NDP would channel profits at the Canadian Mortgage and Housing Corporation into new affordable housing.

Ian Sutherland, the Liberal candidate, drew on his experience as mayor of Squamish applying for infrastructure grants, and said he would work to change the way the federal government awards money to communities while pledging $70 billion over 10 years. He also pointed out that it was the Liberal Party that put the economy on sound footing with annual surpluses in the federal budget.

The fifth question was directed at Wilson, and asked what should happen when an MP crosses the floor. Wilson answered that he never crossed the floor, sitting as an independent for 10 months before joining the Greens.

“The number one reason is the values and beliefs of the party, and that protecting the environment… was a big part of my platform in the last election. Number two was that (Green Party leader) Elizabeth May was going to be left out of the leadership debates by the old boys network after earning 1.5 million votes and (the Greens) were the only party to field 308 candidates in the last election… I sleep well at night,” he said.

Weston did not have a specific policy response, but said he had no plans to ever change parties. Sutherland said that any candidate who switches parties should face a by-election, “and take their chances with the new party,” while Forst pointed out that the NDP is the only party with an official policy to that effect.

Next up was the Canadian mission in Afghanistan. The questioner asked Weston how Canada could justify propping up a government in Afghanistan that introduced the death penalty for people who switch religions.

Weston credited leader Stephen Harper for restoring Canada’s place on the world stage through the 38 nation, NATO-led Afghanistan mission, and said one of the goals of the mission was to give constitutional rights to women. He said he hoped that the offending law would be swept away.

The next question was about greenhouse gases (GHG) and the different platforms put forward by the parties.

Forst said reducing GHG will require Canadians to take personal responsibility, and big industrial polluters to take responsibility. He pointed to the NDP’s cap and trade policy, a $450 million investment in “green jobs” and programs that help people retrofit their homes with green technology and purchase low emission vehicles.

Sutherland pointed to the Liberal Party’s Green Shift plan, and said that criticisms of the plan by other parties were not accurate. It is revenue neutral, he said, and all money raised from the carbon tax will be offset by tax cuts.

“It’s a well thought out, comprehensive program that addresses the problem,” he said, while acknowledging that it still didn’t go as far as programs in European countries. He urged everyone to read the program for themselves.

Weston pointed to the Conservative Party’s Turning the Corner plan, which mandates a 50 per cent greenhouse gas reduction by 2050, “which is both realistic and achievable,” as well as a reduction of 20 per cent by 2020. He also pointed to a Conservative program that buys back vehicles made before 1996, as well as to a new promise by Harper not to sell fossil fuels to countries without the same carbon reduction goals.

Wilson said climate change was the perfect issue to differentiate the parties, and that the Green Party is the only party with credibility on this issue by advocating for both a carbon tax and a cap and trade system.

“We have four people up here from four serious parties, and we have four clear and different policies,” he said before attacking each of the other parties’ policies for being too weak. His biggest criticisms, as usual, were for the Conservative Party and “$2 to $3 billion” in cuts to environmental funding and programs in the last two and a half years.

The next question was related to the Conservative Party’s plans to increase penalties for young offenders, and the fact that most families have two working parents.

Wilson said affordable housing was an issue everywhere in the riding, and advocated for more density in urban centres to make homes more affordable, which he said leads to safer communities. Weston again pointed to tax cuts and credits that give more money to families to make their own decisions.

Sutherland jumped on the question, referencing studies that suggest every dollar invested in children saves government $55 to $60 in the long run. The choice is to “spend money on programs early in life or pay for it over and over again,” he said.

Forst pointed to his experiences as a school counsellor and teacher, and says he saw first hand how childhood poverty leads to crime in Canada.

“The fact that the childhood poverty rate has been increasing every year under the Liberals and Conservative governments is just shocking,” he said, noting that the NDP have made child poverty a central issue in their platform. Among other things, the NDP would immediately increase the child benefit to $5,000 per year. He also called for an emphasis on rehabilitation, calling prisons “Universities of Crime” for young offenders.

The next question was a follow up on Weston’s earlier statement that Canada would not trade oil to companies without greenhouse gas reduction plans, and the fact that the U.S. is currently Canada’s biggest customer.

Weston said that the effect would increase standards in places like the U.S. and said that Harper is committed to the program. Wilson said that Harper’s plan does not specifically apply to the trade in oil or gas, but only to bitumen fuel, which makes up a small percentage of exports.

Sutherland pointed out that the Canada is the biggest per capita producer of greenhouse gases in the world and said, “we need to look after our own house” before telling other countries what to do. Forst clarified that the NDP did not call for a moratorium on oil sands production, but rather on the development of new oil sands projects until environmental issues can be addressed.

The next question was directed to Weston. Given the Conservative Party’s reputation for making members toe the party line, the questioner wondered how Weston could represent such a diverse riding in Ottawa.

Weston said that the riding would accomplish more with a voice in government than by electing someone from an opposition party. He also pointed to the Conservative policy that allows free votes except on confidence matters.

The next question was about the exchange rate, and where the candidates thought the dollar should be for tourism.

Wilson outlined some of the causes of the economic crisis, and suggested that the Canadian dollar would likely drop as a result. He said the Green Party would reinstate a GST rebate program for visitors.

Weston criticized the Liberal Party for accumulating huge surpluses and said they should have been putting money in the hands of Canadian families instead of government bureaucrats.

Sutherland said the general consensus in the business community is that the Canadian dollar should be at about 90 cents. He also took a shot at Weston, noting that bureaucrats are Canadians too. And he noted the Conservatives increased spending by $33 billion in the past two years.

Forst said that Canada needs new leadership on the economy. “The industry of the future is in green jobs,” he said.

Asked about water exports, all of the candidates were against them, except for Weston who said they could be considered if they created jobs. Forst went further and said that clean air and water should be constitutional rights in Canada.

The topic veered back to Afghanistan and bringing the troops home.

Wilson said he voted twice to end Canada’s mission to Afghanistan, and would vote for it again as a Green MP. Weston said the Conservative Party is sticking to its 2011 withdrawl date but hopes to bring the soldiers back sooner. Sutherland and Forst said they would bring the troops back, starting the process after the election.