Eight of 11 settle out of court in Excalibur case

Christopher Pond, who was stuck on Whistler Blackcomb's Excalibur Gondola when a tower broke four and half years ago, settled his case out of court this week. Pond's trial began Monday morning in B.C.
Apr 17, 2013 9:00 PM By: Alison Taylor 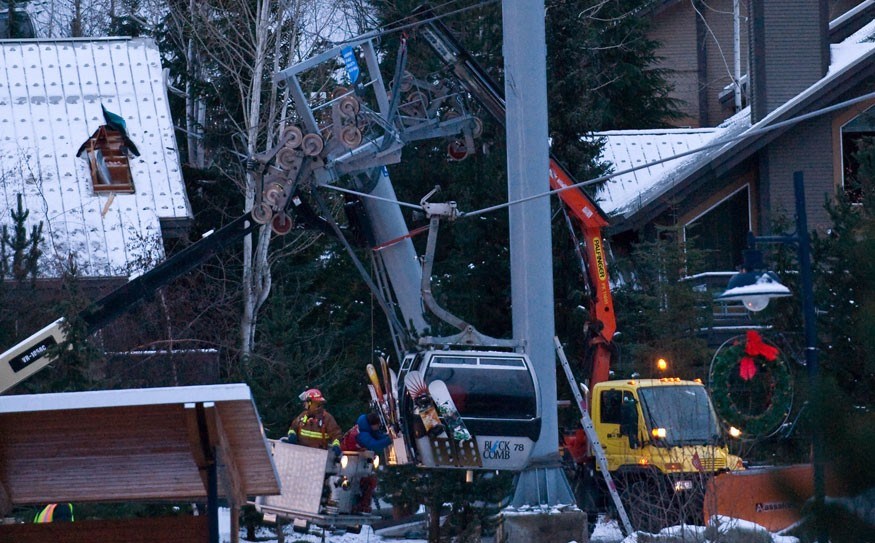 Christopher Pond, who was stuck on Whistler Blackcomb's Excalibur Gondola when a tower broke four and half years ago, settled his case out of court this week.

"It settled this morning," confirmed Pond's lawyer Nancy Wilhelm-Morden. Whistler's mayor took on the cases before winning the municipal election.

Wilhelm-Morden is representing Pond, as well as 10 other people who were involved in the gondola accident on Dec. 16, 2008 on Blackcomb Mountain.

Pond, who was on holiday from England at the time of the accident and who was stuck on the broken gondola with his wife Michelle for two and a half hours before rescue, was not the first of the 11 to settle out of court.

Wilhelm-Morden confirmed seven others have also settled in recent weeks, the details of which are all confidential.

They are the six members of the Hargrave family and their friend Daryl Diggons. Four Hargrave siblings and Diggons were on the gondola when the top half of Tower #4 sheared off the lower section, causing the cable to sag and gondolas to bounce towards the ground. The Hargraves' cabin landed on top of a bus shelter at Gondola Exchange, close to the base of the mountain. The Hargrave parents, who were not on the gondola, also filed lawsuits.

"Those claims have all settled as well," confirmed Wilhelm-Morden.

In his Notice of Civil Claim filed in court April 2010, Pond stated that he suffered psychological injuries, and loss and damage, including soft tissue injuries, nervous shock, anxiety, among other things, from the experience.

His wife, Michelle Pond, in a separate lawsuit, also claimed to have sustained psychological injuries, and loss and damage including headaches, soft tissue injuries, injuries to her back, sleep disturbance, nervous shock, nightmares, anxiety, among other things.

Michelle Pond's case was set to be heard at the same time as her husband's case, but was adjourned at the request of defence lawyer Michael Gianacopolous.

In its response to Christopher Pond's claims, both Doppelmayr and Whistler Blackcomb, in separate submissions filed in court, denied negligence or liability.

Though the liability was denied, Whistler Blackcomb and Doppelmayr agreed not to contest it in Pond's trial. At issue, however, was the matter of damages.

Last week Justice Allen Betton heard Amy Sefton's case, also to determine damages. She was 22 years old at the time of the gondola collapse, living in Whistler for a season, and working at a local hotel.

She was stuck in a gondola between towers five and six for two and a half hours.

She claims, among other things, to suffer from nervous shock, nightmares and soft tissue injuries.

When cross-examined by defence last Wednesday, April 10, Sefton disagreed when defence lawyer Gianacopolous said that the scene unfolding in the hours after the collapse was not a "scene of horror."

Wilhelm-Morden later followed up with more questioning in that vein, asking Sefton why she disagreed that it was not a scene of horror.

Later pro patroller Richard Wyne took the stand. He was called by Wilhelm-Morden as an "adverse witness." He has worked patrol at Whistler Blackcomb for more than 23 years.

Wyne explained his role in the accident — he responded in the immediate aftermath, and assisted the field-rescue leader between towers three and four in the joint effort rescue between patrol, the local fire department and the police.

Wyne learned at court that Sefton testified that no one called to her cabin to ask if anyone was injured or to tell them what was going on over the course of the rescue.

Wyne explained that the rescuers knew 53 people were stuck in the cabins, and the only way to know that was for someone to go down the line and ask; there was no automated count.

That person is called a "herald."

When asked by Wilhelm-Morden if Whistler Blackcomb has a written protocol for lift rescues, Wyne said yes.

Wyne explained why it took more than two hours to rescue some people from the gondola. The worry, he explained, was about putting more stress on the cable line.

"The major delay was waiting for maintenance to tell us that we, as rescuers, weren't going to do any more damage to the line," said Wyne.

Wilhelm-Morden also showed video of the rescue efforts in court.

Next week the trial of Michael Trick is set to begin. Trick was a seasonal worker at the time of the accident and now lives in Alberta.

Whistler Blackcomb will not comment while the matter is before the courts.