Student Vote B.C. comes to Myrtle Philip elementary and other schools in the Sea to Sky corridor
May 14, 2013 4:10 PM By: Cathryn Atkinson 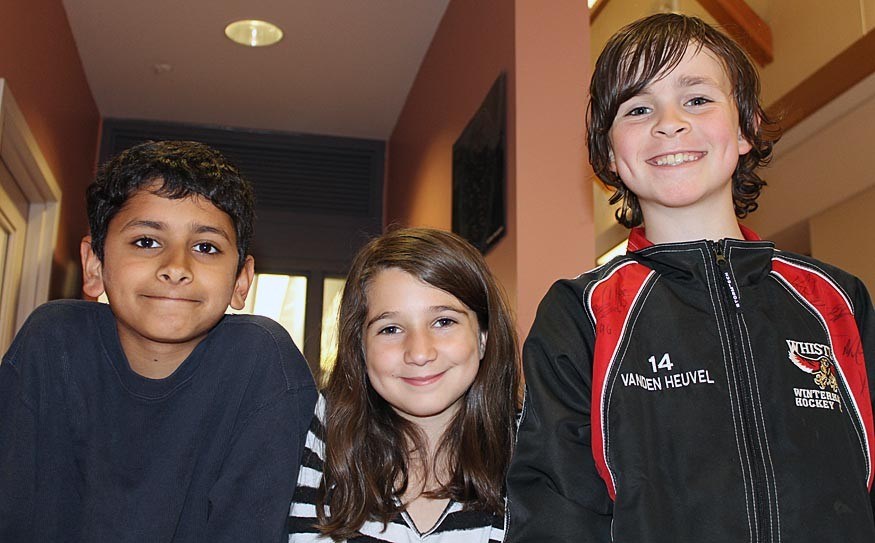 The three youngsters, all students at Myrtle Philip Community School, have participated in Student Vote B.C. (www.studentvote.ca/bc2013/) and cast their own votes for their preferred political parties on Monday, May 13.

"We had a student vote and we learned a bit about government in groups, together that represent the parties," said Uday, who explained his group represented the Green Party and had to try to convince the other students that their campaign promises were the best ones.

"It's part of being in the country, to learn how to vote. If no one voted everything would just fall down. I thought that was an issue," he added.

Conor explained that it was good because when they grow up they want to know enough about how the system worked so they "don't choose a bad government."

"It was really interesting because you learn a lot about government and how people vote. We learned you can only choose one person and you have to put a mark (on the ballot) by the name of the person," he said.

But Siena pointed out that being politically aware "was pretty fun but kind of complicated" because of the need to weigh conflicting issues like resource development, oil pipelines and the economy.

She and her two classmates said they didn't know a provincial election was on until they started the Student Vote project.

"It made me think a bit more about all the parties, what they stood for. I didn't know there was an NDP!" she said.

Student Vote B.C. involves over 100,000 pupils from over 750 elementary and high schools, giving them the chance to look at the 2013 election, the democratic process and the rights and responsibilities of voters.

Those participating in Student Vote B.C. from each school cast a vote in their own election, which shadows the grown-up's ballot, the results of which are due to be made public after the main 2013 poll ends at 8 p.m. on Tuesday, May 14.

Jeannette Unruh, Uday, Conor and Siena's teacher, said her Grade 4/5 split class had plunged into the project with enthusiasm. She said this was the first time they had tied it in with a provincial election. The students were assigned a political party to be in and Unruh said it gave them the chance to study their platforms, even if the youngsters didn't feel they supported the party's positions.

"Now they are totally aware of how it works, the political party process and promises that candidates make, and why we do it," Unruh said. "They've got great questions, about where they get their money from, whether the candidates support the Enbridge pipeline and so on."

In the course of the project, four of the five West Vancouver-Sea to Sky candidates were able to speak to the students, BC Liberal Jordan Sturdy, NDP candidate Ana Santos, and Green Richard Warrington in person, BC Conservative Ian McLeod by phone.

The candidates answered questions on the campaign and their positions on issues.

"(The students) had very good questions," Unruh said. "They had to find five promises and five issues that they had learned about and then they campaigned around the other classrooms to tell them what they would do. They see it is complicated."

"Something that's been really good is to have conversations about voting and having a different perspective about political parties, maybe not voting for that person but really seeing what the issues are," said Unruh.

Voter turnout in the West Vancouver-Sea to Sky region has dropped 25 per cent since the 1990s. Unruh said having the students participate can have a wider impact on their families participating.

"What they're really trying to do is get kids interested so that they are pushing their parents to vote."

Back in the classroom, Uday, Conor and Siena all give an enthusiastic "Yes!" when asked if they will pay more attention to politics in the coming years before they are allowed to vote as adults.