Voters left in the cold, Millennium Place too small for crowds
Nov 9, 2011 7:02 AM By: Alison Taylor 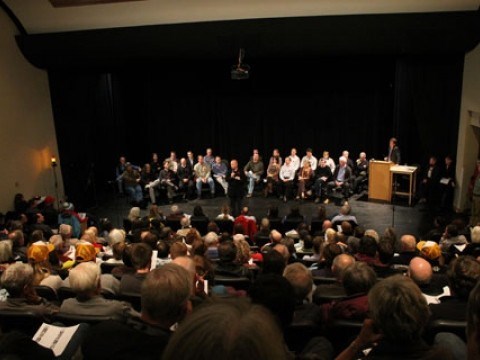 It's still anyone's game for council, but the tough job now lies with the voters who must separate the wheat from the chaff when it comes to campaign promises.

That much was evident at Monday's all candidates meeting, less than two weeks out from the municipal election, where the mood for change in the community was palpable but the way to achieve that change wasn't as clear.

Hundreds of voters showed up to hear from the six mayoral candidates, all 25 council contenders, and three of the four school trustee candidates, with the crowd overflowing out of the Millennium Place auditorium, and spilling into the foyer and entrance.

That was a big disappointment for resident Rick Clare who took the time to make the meeting, couldn't get a seat and left disappointed. Millennium Place, which only holds 240, was not the right venue to host a meeting with more than 30 candidates, he said.

"We paid for parking and went there to get informed," said Clare Tuesday.

"It's an important time," he said, adding that people are craving information and trying to learn as much as they can about the candidates.

This all candidates meeting, hosted by the Whistler Chamber of Commerce and the Whistler Arts Council, was one of the few public forums to see the candidates debate, think on the spot and put their best face forward.

While there was no clear winner during the mayoral debate, the race has narrowed to the three frontrunners, with incumbents Mayor Ken Melamed and councillor Ralph Forsyth defending their decisions this term and outlining their plans going forward, while former councillor Nancy Wilhelm-Morden clearly listed her 10-point campaign promises.

It was those promises that made the audience sit up and take notice.

She vowed: No more tax increases. A roll back of pay parking in Lots 2 to 5. A pay cut as mayor. A promise to "fix transit." A pledge to restore the trust between the community and the hall.

In a way it was a promise to right the wrongs of the past, soothe the angst in the community, sounding almost too good to be true.

"She's got my vote," joked mayoral candidate Shane Bennett as he took the stage after her. "That was pretty good."

Mayor Melamed appeared confident and didn't mince his words when he took the stage.

"The slash and burn candidates will change our resort economy," he said, referring to the idea of cost cutting at municipal hall.

Now is not the time to be pulling the flower baskets from the village or putting away the Christmas lights.

He said he recognized Whistler needs a smaller, leaner and more efficient government.

"More savings will be found," he promised.

In his closing speech he said: "I don't have campaign promises. I have a plan to get us out of the doldrums."

Ralph Forsyth swaggered on the stage, initially forgoing a microphone to speak to the crowd.

He played to his strong points - that he's focused on family, wants residents to have meaningful opportunities and willing to listen to the community and take advice.

I'm not singing a new tune so you'll re-elect me, he said.

He closed with a promise of collaborative leadership going into the future.

While the floor belonged to the three mayoral frontrunners, council candidates also had a few minutes to get their points across.

All 25 showed up this week.

They were asked questions about the municipal budget, the free concert series in the summer, illegal space and the Whistler2020 planning document.

Not all were given the chance to speak other than their introduction.

Roger McCarthy, who has been unable to attend the two previous all candidates meetings, was asked about reducing the municipal budget.

"The way you go through a budget is you zero base it," he said, meaning that you go right back to square one and rationalize all the costs.

He recognized that can take some time.

"I have a long history of doing it," said McCarthy, who has worked for several ski resorts.

One of the younger candidates for council, Steve Andrews, enraptured the crowd with his poem.

"I live in Whistler

I live to bike and to shred

But that doesn't mean

I'm without neurons in my head."

There will be one more all candidates meeting on Monday, November 14 at the Summit Lodge from 7 to 9 p.m., hosted by the Whistler Forum.

There will be a mayor's debate hosted by Rotary at the Rainbow Theatre on Friday, November 18 at 7 p.m.

Sustainability Centre under attack at AWARE all candidates meeting

Though more than two-dozen council contenders came to talk about their views on the environment, last week's AWARE all candidates meeting belonged to the three mayoral frontrunners.

They were asked about the asphalt plant operating next to Cheakamus Crossing and about the community's flagship environmental organization, the Whistler Centre for Sustainability. They were also asked about the university proposal on the Alpha Creek wetlands.

Melamed was asked specifically about the asphalt plant, and said the issue was one of the most difficult of this term. The Resort Municipality of Whistler is going to court against the plant owner in the days after the election in an attempt to get the plant to stop operating.

"I believe that the asphalt plant should move," he said. "I have supported that direction for quite some time."

When asked to clarify his comments after the meeting, the mayor said there's a perception that he wanted the plant to stay at Cheakamus because he supported the direction to see it moved just 150 metres. That, he said, was just the first step in dealing with the asphalt plant.

"I haven't wanted it to stay," he said. "I have been trying to get it to move since the residents started to complain about it."

When asked if he would have done anything differently he said:

"My statement is what it is."

Said Forsyth when asked about the plant: "My record is clear and I'm proud to boast about it on the asphalt plant."

She went on to say that her contenders would likely not call the seed funding taxpayers' money because it came from the province.

Melamed, who is seeking re-election, jumped on that when it was his time to espouse on the centre.

"It's that kind of misunderstanding of the RMI (Resort Municipality Initiative funding) that risks us losing it," he said, of the $7.5 million annual grant, which has not yet been approved for the coming years.

"It (the Centre) is absolutely a phenomenal organization," he added.

"It is doing work for the province because they love it and so do I."

Forsyth also fielded the question saying he stuck his neck out for the Centre back in the day on the premise it was going to make local government money and generate money for the resort.

"I'm the kind of person who stirs the pot and takes chances," he said.

He added that there is no more municipal financing going to the Centre after this year.

Wilhelm-Morden also said it "seems crazy" that the centre has a $190,000 municipal contract to look after the municipality's long-term plan - Whistler2020.

The question of the Whistler University proposal was also put to the three mayoral frontrunners. That development is slated to go on the land north of Function Junction called the Alpha Creek wetlands, or the Zen lands.

"For me, it's not about a university or not," said Mayor Melamed. "This is not the right place."

He said he thought the recent consultant report, which highlighted that stand-alone universities are not the most economically viable propositions at the current time, was a "stake through the heart in this."

Wilhelm-Morden said she met with the university proponent recently and told him she would like to see the application completed and brought into the hall.

"Let's get this in the hall and let's have a discussion."

She floated the idea that if the Zen lands aren't suitable for development, Whistler could swap it with flat land at Cheakamus Crossing.

Forsyth, who recognized the sensitivity of the valley bottom wetlands, said the application would receive due process at the hall.

For more information on where the candidates stand on the environment, check out their responses the AWARE's questionnaire at www.awarewhistler.org.