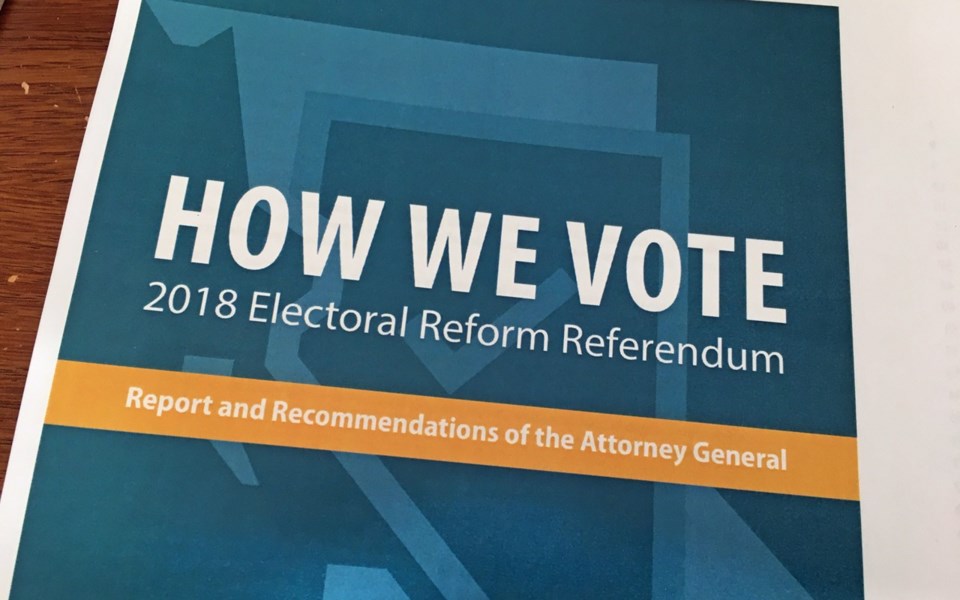 how we vote A referendum campaign on electoral reform in B.C. is underway, with voters having their say this fall. Photo by Braden Dupuis

The campaign for electoral reform is officially underway.

In a mail-in vote this fall, British Columbians will decide if they want to keep the current First-Past-the-Post (FPTP) voting system or move to one of three Proportional Representation systems: Dual Member Proportional, Mixed-Member Proportional (MMP) or Rural-Urban PR.

The referendum voting period runs from Oct. 22 to Nov. 30.

In the lead-up to the vote, Pique will be speaking with experts across the province and detailing each of the proposed new systems in depth.

For now, head to engage.gov.bc.ca/howwevote to read detailed descriptions of each.

While electoral reform is a complicated issue, you can think about changes to electoral systems in a number of different ways, said Max Cameron, director with the Centre for the Study of Democratic Institutions at UBC.

"One is, what does it mean for the way that we draw our electoral boundaries? ... Another is how do votes get translated into seats? And the third is what does the ballot look like?" Cameron said. "And I think of those three things the main thing that voters are going to notice, if there is a change, is the ballot will look a little bit different. So I guess what I'm saying is I don't think that any of these systems would place demands on voters that are unreasonable in terms of their knowledge or their abilities."

The provincial government has gone down this road twice before in recent years, with referendums in 2005 and 2009. Both failed to meet the government-set threshold for reform.

The threshold for the province-wide, 2018 vote is set at 50 per cent, plus one vote.

Of the three new scenarios being proposed, Cameron said he doesn't particularly favour one over the others.

MMP has the advantage of being tried successfully in other jurisdictions, like Germany and New Zealand, while the other two are mostly untested.

"Many political scientists tend, on balance, to think that proportionality is an important value, and that having a more proportional system than FPTP could be potentially a good thing, and I tend to agree with that, so I would be inclined to support the adoption of any of those systems," he said. "The real question would be, which among them is most likely to strike British Columbians as well-suited to our own jurisdiction?"

That will be the question B.C. voters must ask themselves in the months to come, as referendum campaigning ramps up across the province.

It's important to note that there's no consensus among political scientists about a single electoral system that's better than all the others, Cameron noted.

"The best way to try to approach this problem is to sort of think generally about what these systems do and then figure out what fits best with a particular jurisdiction," he said.

In B.C., for example, one of the biggest challenges is that a majority of votes are clustered in the Lower Mainland and Vancouver Island, while ridings in the north and Interior are much more sparsely populated.

"That's one of the reasons people are uncomfortable with the idea of moving to any pure system of PR, because that would weaken representation for rural areas, and we want to make sure that rural areas are well served, and that they have a connection to representatives to speak for them in the legislature," Cameron said. "And so that's one of the things that the Rural Urban PR is designed to address."

Adding to the complexity of it all is that nobody is able to speak from a position of absolute expertise, Cameron added.

"It really is a conversation that needs to happen within the public at large and above all, among politicians, to try to figure out what we think is going to create the best functioning democratic system for the province."