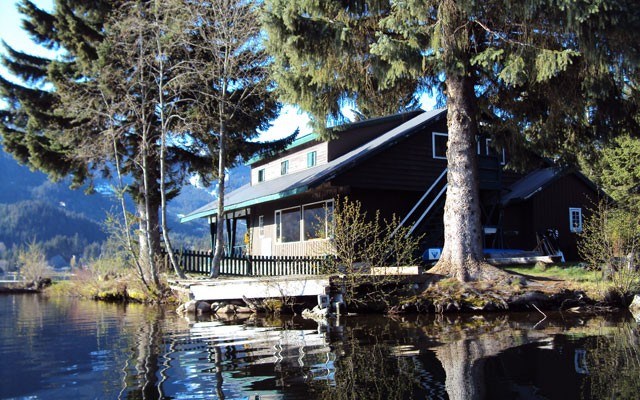 Pretty as a picture The municipally-owned hostel on Alta Vista Lake may host Emily Carr summer students in 2014. Photo submitted

After shutting the door on a stand-alone Whistler university, council has opened its arms to partner with one of the most prestigious art schools in the country.

It's designed to start off small, with a proposed two-week satellite studio program on the shores of Alta Lake next summer. But there's no doubt both Emily Carr University of Art + Design and the Resort Municipality of Whistler see this as the beginning of a long-lasting partnership.

"This is exactly how we wanted to start off with some of these initiatives," said Mayor Nancy Wilhelm-Morden at Tuesday's council meeting before a unanimous vote to sign a letter of agreement with the university.

The announcement of the summer program comes on the heels of council's decision earlier this month to block a large development on 75 acres of land for Whistler International Campus, and instead pursue smaller opportunities with partners with strong reputations.

It has been a whirlwind development to come out of the council-appointed Learning and Education Task Force, convened last year.

"The resort municipality has been really supportive in facilitating us," said Sadira Rodrigues, dean of continuing studies at Emily Carr University of Art + Design, who presented potential ideas to the task force in February. "We don't usually move within a year to a program offering."

But this, a program with an institution of Emily Carr's cachet, is right up council's alley.

The mayor pointed to the synergies of this project in keeping with the task force recommendations: it's small to start, minimal risk to the resort, with a world-class partner, and potential to grow.

"We did what we would consider a small-program proposal as a way of understanding what we would like to do longer term in Whistler," said Rodrigues, in an interview with Pique. She was unable to attend Tuesday's meeting for the official letter signing.

"We are very much interested in working longer term in Whistler."

The letter of agreement outlines a two-week satellite program, from July 7 to 18, at the old hostel site on Alta Lake. The program is slated for youth and teens with the curriculum focused on photojournalism, adventure photography, mapping, camping and design.

It would be offered to a maximum 28 students who are interested in future studies or employment in art, design, architecture, or planning and will provide them with portfolio-ready work.

Councillor Duane Jackson said this would also provide an opportunity to test the municipally owned hostel site, which he called a "world class site" with a "world class partner."

Whistler estimates a budget of $5,000 or less to get the site ready for the program.

The longer-term site planning for the hostel property will be considered by the Resort Experience Division as a separate project in 2014.

"Emily Carr University has established enormous credibility nationally and internationally," she said. "They have foreign students. They've worked many, many years to build up an incredible school of higher learning that is focused on art and design.

"For Whistler, and for the Whistler Arts Council or any other community organization working on the arts in Whistler, to connect with that credibility is a fantastic opportunity."

She sees countless opportunities that could build on the strengths of both Emily Carr University and Whistler.

"Whistler's starting on one letter of agreement for one satellite program to launch things and kick things off, but looking down the road at all the other initiatives that are possible, it's the beginning of what I see as a long-term relationship and I think it's fabulous," said Niedermayer.

This is not the first satellite program from the Vancouver-based university; it has programs in Penticton, Prince George and Comox.

"Emily Carr's got a provincial mandate so this is part of the provincial expansion work that we're doing," said Rodrigues. "We're working with various communities to build arts and culture."

Whistler is appealing, she added, because of its location to Vancouver, the strong arts and cultural community already here, including a well-established film festival, and the connection to the local First Nations communities.

And of course the new Audain Art Museum, which will house some of the most important art in the province when it opens in mid-2015, including some of Emily Carr's work.

Michael Audain, the Vancouver philanthropist and art collector who is building the museum dedicated to showcasing his life's collection, is a large supporter of the university, giving $5 million through the Audain Foundation for Visual Arts to the school this year.

"That collection, and the museum itself, it's a really important collection," said Rodrigues. "It's very rare that something like what's happening in Whistler occurs."