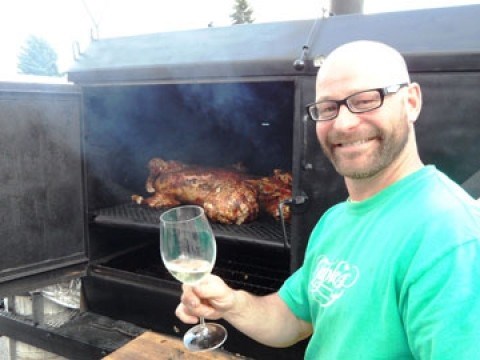 It's traditional when someone passes to mention how much that person will be missed, but in Eric Rousseau's case it's almost an understatement: friends and co-workers organizing a celebration of his life in Whistler are booking one of the largest venues in town for an estimated 800 to 1,200 friends. A Facebook page that was created in his honour, Rooster's Roost, had over 500 members in the first 24 hours. At press time it was over 620.

All of his friends had similar things to say about Rousseau. They commented on his big heart and the way he made everyone feel important. They talked about his generosity, real and spiritual, and how open he was to others. They raved about his incredible skiing, and skills that stuck out in a town filled with great skiers. He touched hearts, changed lives and inspired thousands of people in ways great and small.

He even had a motto to be remembered by: "The faster you ski, the less time you're in danger."

"He was a very diverse guy," said Francois Sauve, who met Rousseau a decade ago through Ski School on Blackcomb Mountain. They shared an affinity for racing motorcycles and travelled together to the U.S. to race various tracks. Rousseau also went to work for Sauve's tree planting company, maintaining vehicles and helping out everywhere.

One of the things Rousseau was interested in was skiing. He achieved his Level 4 ski certification in only two attempts, then became a Level 4 examiner. He was recently selected as one of 10 Canadian instructors to represent Canada at Interski in Europe, the international body that harmonizes ski technique and instruction standards. In fact, he was the captain of the Canadian team at the most recent Interski congress.

"He was a hell of a guy," said Rob McSkimming, VP of business development for Whistler Blackcomb. He knew Rousseau for about 10 years.

"The consensus was that Eric was probably the best natural skier we had in our company in our Ski School for sure - what he accomplished with the Canadian Demo Team and Interski team bear that out. I just had a tonne of respect for the guy because of that. And not only was he a great skier, he was a great trainer and developer of talent.

"No matter who he met and what station they were in life, he had an impact on people. He was full of life, he was fun to be around - the life of the party, and a lot of people had a lot of respect, and a lot of good times, with Eric."

Bart Barczynski was Rousseau's supervisor, but also a close friend for 15 years.

"One of the sayings going around right now was that he made everybody feel like you were his best friend - I thought I was, but he made everybody feel that way when he talked to you. It comes from how open his heart was. He would drop anything in a second to help you do anything, give you the shirt off his back - he was full of love, that guy."

His skills on the slope also earned him a few fans.

"He was a guy that had two speeds, full throttle or stop," said Barczynski. "He was a legend, as far as the Snow School and skiing community was concerned. He got away with lots of fun, and we always admired him for doing that. He was unbelievably gutsy - he would have gates over his shoulder after setting up a race course, and he would spin a massive helicopter off the top of the slope and land halfway down Toilet Bowl. That's not kidding, there were lots of people who witnessed that.

"He would give you a little back-handed compliment, like 'you were skiing really fast there, when I passed you.'"

Ralph Forsyth would qualify as one of Rousseau's oldest friends in Whistler, going back almost 20 years to 1992. He said that Rousseau is still working his magic, even if he's not around to be part of it.

"Having heard the news about Eric, I've reconnected with so many old friends - people I haven't heard from for a while are reaching out. Eric was never shy about telling you how he felt, that he loved you, and his passing has brought some of us closer together - if there's a silver lining to what happened, that's it. He really was this bigger-than-life guy, and there are so many stories that you can't believe one person could do so much."

Forsyth has some stories of his own. "I think we hit it off because we were both had a lot of similar interests - chasing girls and skiing being the first two, with hitting the bar being a close third," laughed Forsyth.

In one story, Eric bought a car off a friend at the bar for $300; the friend woke up the next day with no money left and no car. In another, they were at a barbecue when they ran out of propane - so Eric went to a neighbour's without their knowledge and borrowed another barbecue.

"He would do crazy stuff like that. If any of us did that we'd be in jail, but with Eric everybody would laugh and give him a hug."

Forsyth, who is also a Level 4 ski instructor, was in awe of Rousseau's skiing.

"He was under 30 when he passed, which is a big deal.... even when he was training for Level 4 he wanted to be on the Intersi team and he made - he lived his dream and accomplished that this winter. There wasn't a dry eye in the house when he achieved that and got to go to Europe, one of the top 10 in the country."

Arne Gutmann also knew Rousseau through Ski School, but as a snowboarder.

"The reason we knew each other is because we shared locker rooms and he was just one of those crazy, infectious people. He was a skier who didn't give a shit I was a snowboarder... and when I started skiing, and pretty aggressively, he would always say hi and wave, and applaud me for skiing.... if you ever skied with him it was one of the most fun days ever. He was wickedly awesome at it and had fun doing it."

Rousseau was killed on Sept. 27 in a tree falling accident. He was working on a contract near Maple Ridge, clearing trees underneath a BC Hydro line when he was struck by a tree. The incident is still under investigation.

Rousseau is survived by both parents, a brother and a sister, as well as his dog Chiolio. His body was flown to Quebec for a service on Saturday, where he will be cremated and brought back out West. Half of his ashes will go to the Red River, where he worked for years as a kayak guide, and the other half will be scattered on Blackcomb Mountain.

Details about his celebration of life will be posted on Facebook, with a tentative date of Oct. 15.