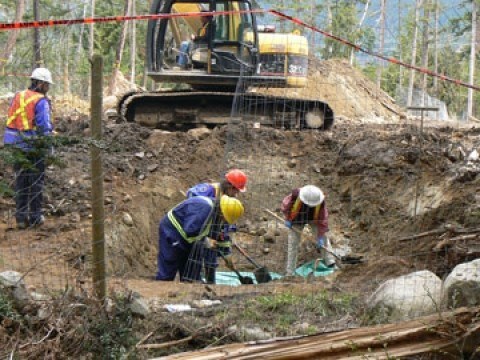 The B.C. Society for the Prevention of Cruelty to Animals (BC SPCA) believes it has found evidence to suggest that some sled dogs found in a mass grave near Whistler were not killed humanely.

But, said Marcie Moriarty, general manager of cruelty investigations for the BC SPCA: "In order to protect the integrity of the investigation and the evidence, I'm not going to go into great detail about what was found."

Investigators have been clearing ground debris and garbage piled on top of an alleged sled dog gravesite for several days now and yesterday confirmed that 52 canine remains have been recovered.

"Scientists were able to collect evidence that we hope we will be able to forward to Crown council for this case," said Moriarty.

While Moriarty wouldn't comment on the state of the exhumed corpses, she did say anthropologists and scientists working at the excavation site have uncovered new findings to support a claim of animal cruelty against alleged dog killer Robert Fawcett. At the time of the alleged cull Fawcett was a co-owner and manager of Howling Dog Tours Whistler Inc, which contracted out sled dog tour operations.

Three veterinarians are using a vet triage system to examine the dogs on-site to discern whether they died by single bullet wounds, which is allowable by law if done humanely, or other less humane methods. This stage of the investigation, which is running at a cost of $25,000 per day, is expected to continue until tomorrow. Following that, Moriarty said it could take weeks or months for forensics to prove whether the dogs were killed inhumanely.

"It's a process of determining whether there are elements to support a Criminal Code offence of causing unnecessary pain and suffering for an animal," she said.

"Any sort of case where it could be established, for example, that throats had been cut and the animal bled out - that is not an acceptable method of killing an animal. If the animal was bludgeoned to death and didn't die instantly from a first shot to the head... If an animal had multiple gunshot wounds and science could show that the first shot did not kill that animal - all of those would be examples."

The corpses will be sent for further necropsy or skeletal exams at a forensics lab in the Lower Mainland.

Under Canadian law it is not an offence to kill a working animal as long as it dies instantly without pain or suffering.

Information leaked in January from a detailed WorkSafeBC document filed by Fawcett, who was seeking compensation for mental trauma resulting from the cull, stated that he had stabbed, shot and slashed the throats of the dogs.

The case has raised questions regarding the treatment of working animals in B.C. A sled dog task force set up by the provincial government has proposed a code of practice for sled dogs.

"Currently in Canada there are national codes of practice that apply to cattle, sheep, pigs and it sets out a minimum care requirement so what we'd like to be addressed are housing, behavior, socialization, exercise, food and water, veterinary treatment and proper care of these dogs from birth to death," said Moriarty.

The $225,000 cost of the investigation, $100,000 of which is being paid by the province, has caused some to criticize the necessity of the process, but Moriarty said her organization is bound by its mandate to follow up on all serious claims of animal cruelty.

"We are an enforcement agency, we don't get to pick and choose what cases we do," she said.

"Like police - do they get to pick and choose based on 'well, is this going to cost us a lot of money to investigate so we're not going to do it?' We had an obligation to look at these allegations, to do our best to ensure that we investigated the case fully and this isn't speaking out just for these dogs, it's for all work animals in B.C. so I think this is both advocacy and doing our job as an enforcement agency."

Currently the maximum amount of time an individual has spent in jail for animal cruelty in B.C. is eight months.