Snowboarder found to have suffered psychological trauma
May 8, 2013 9:00 PM By: Andrew Mitchell 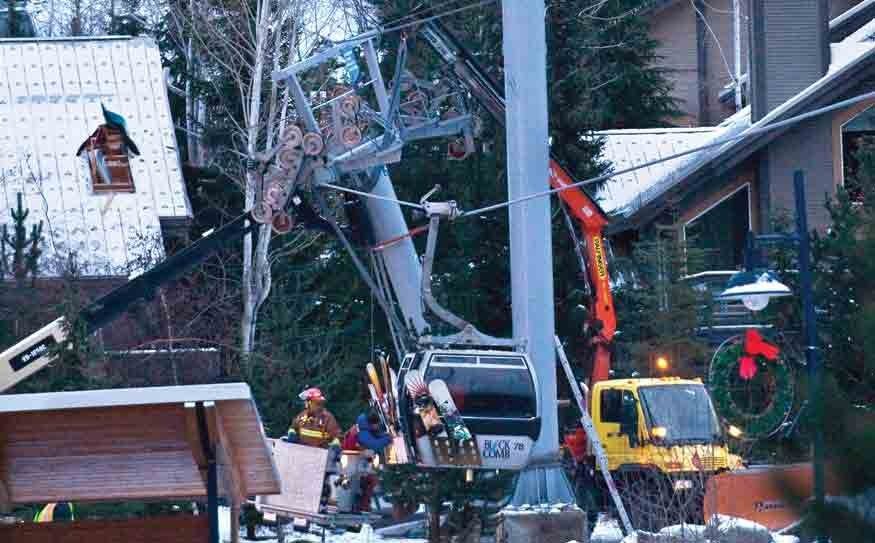 The 27-year-old was on the gondola with her boyfriend and two strangers at about 2:30 p.m., and was thrown to the floor when Tower 4 snapped due to ice build-up. The cabin she was in dropped toward the ground in two stages in rapid succession during which time she may have struck her head. No cabins came off the cable, and no one died in the accident, but as the cable sagged, some cabins slumped nine metres, bouncing as they went.

The university graduate spent roughly three hours in the gondola waiting to be rescued, and claimed psychological damages among other things, including on-going issues with her knees.

"My own observations of the plaintiff during her evidence were of a person who has been affected by the incident," said B.C. Supreme Court Justice Douglas Allen Betton in his judgment handed down May 3 following a five-day trial last month.

"She frequently struggled to control her emotions when describing the changes in herself that she has experienced as a result of the incident."

During the trial Sefton told the court the accident left her suffering frightening nightmares, nervous shock and permanent physical disability. The defendants had argued that Sefton failed to mitigate the psychological impacts of the incident by seeking counselling, which Betton rejected.

"In part, my conclusion is based on my observation that part of the reason that the plaintiff did not do more than what she did is because the problems she was experiencing were not affecting her sufficiently to bring her to the conclusion that further or additional treatment was necessary."

Sefton, who received strong references from her employers, is one of 10 claimants represented by Whistler's mayor, Nancy Wilhelm-Morden, who took on the cases as part of her legal work before winning the 2011 municipal election.

The award of $38,100 is less than Sefton had hoped for — Wilhelm-Morden suggested to the court that non-pecuniary and general damages should be in the range of $90,000, plus $40,000 for loss of earnings, $2,500 for future care and $850 in special damages for therapy and damage to her equipment.

Reached after the award was handed down Wilhelm-Morden said in an email: "...the judgment was fair."

On the other side, the defendants argued that non-pecuniary/general damages, if awarded, should not exceed $8,000 to $18,000 and no money should be awarded for loss of earning capacity or future care. They said the reimbursement for therapy should not exceed $280.

The final ruling included $35,000 for non-pecuniary/general damages, nothing for lost wages, $2,500 for future care, $600 for special damages, and costs. So far, eight of 11 lawsuits regarding the Excalibur Gondola accident have been settled out of court.

Fifty-three people were trapped in gondola cars in the lower half of the lift, some for more than three hours during the course of the incident and the temperature fell to -12 degrees C.

Twelve people, including Sefton, were treated at the Whistler Health Care Centre that day but all were released. Whistler Blackcomb and the B.C. Safety Authority undertook a full investigation of the accident.

Water seeped into the tower and froze. The expanding ice caused the top of the tower to sheer off at the flanges that connect the upper and lower parts of the tower.

-With files from Alison Taylor