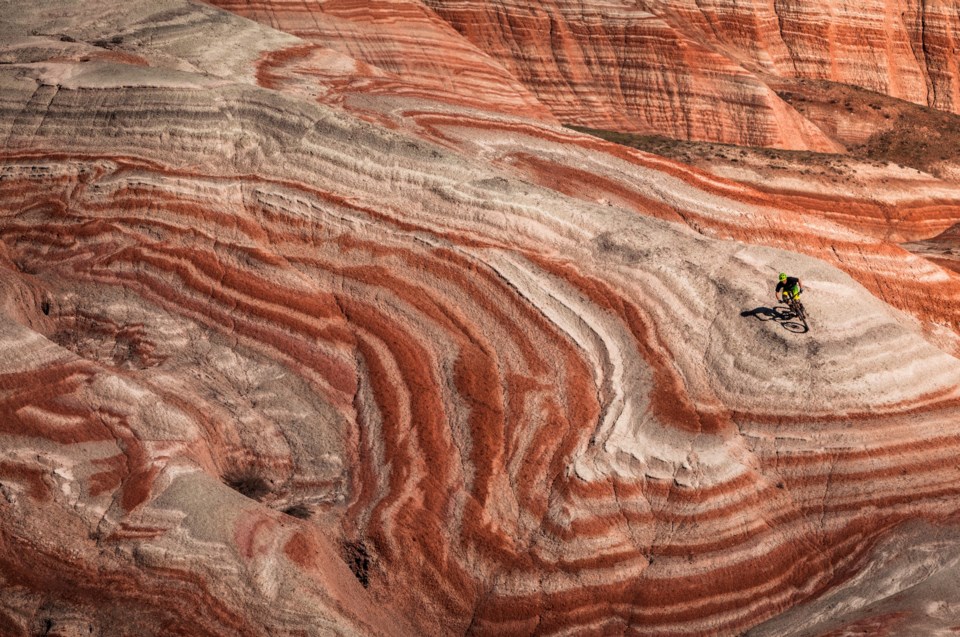 While adventure travel appeals to many in the Sea to Sky corridor, few can say they've done something as interesting as spending a month in Azerbaijan—and presumably even fewer can say they went on an epic, mountain-bike adventure there.

That, perhaps, played into the popularity of a recent talk given by Whistler locals Justa Jeskova and Steve Storey. Part of the Whistler Public Library's Armchair Tours series, the event was standing room only, with attendants leaning up against a table in the back of the library's community room, listening intently as the couple narrated a slideshow featuring Jeskova's stunning photos of the trip. (The award-winning photographer's clients include Whistler Blackcomb, Tourism Whistler, and the Scandinave Spa.)

Jeskova recalled that the pair's decision to travel to Azerbaijan was made after they realized going to Iran would be too challenging in terms of obtaining a visa. With its diverse climate, geography, and astonishing mountain ranges, they figured travelling to Azerbaijan could make for an exciting adventure. It turns out they were right.

Situated at the crossroads of Eastern Europe and Western Asia, Azerbaijan is bounded by the Caspian Sea to the east, Russia to the north, Georgia to the northwest, Armenia to the west and Iran to the south.

Yet despite its mountainous geography, the country is not known for mountain biking, and after speaking with locals, Jeskova and Storey estimate there are only between 20 and 30 active riders in the country.

While only intending to spend a day in the capital, Baku, the couple extended their stay, linking up with some local mountain bikers for some fun single track accessible from the city. They also visited a number of Baku's architectural marvels, including the Azerbaijan Carpet Museum (a gem of a building that looks like a giant rolled carpet) and the Heydar Aliyev Center. Designed by Iraqi-British architect Zaha Hadid, the centre eschews sharp angles, famous for its flowing, curved style.

The couple then got off the beaten path, visiting the district of Khizi in the northeastern part of the country. That's where they found the Candy Cane Mountains: barren, rust-coloured, shale mountains (the stark colour is created by the oxidation of iron compounds in the earth). The mountains provided a first-rate freeride playground, where walks up narrow ridges were rewarded with fast runs down.

Storey and Jeskova also travelled to Lahic, a small village known for its highly skilled copper artisans. There they found fairy-tale single track, where the only thing holding them up were goats parked along the trail.

The couple also visited Khinalug, a remote, self-sufficient Caucasian village that Jeskova explained had never experienced the ravishes of war.

Throughout the slideshow, Jeskova intercut mountain-biking shots with images of locals, often as they relaxed in modest, beautifully decorated homes.

Following the talk, Jeskova said that it was the magnificent Candy Cane Mountains that inspired the trip in the first place.

"I saw (a) photo (of them), and they resonated with me," she explained. "I was like, I want to bring bikes there."

With little in the way of tourism infrastructure, especially when you leave Baku, Jeskova said that she largely relied on Facebook and Google to find destinations.

As a photographer, the landscape and people provided wonderful subject matters, said Jeskova, adding that her favourite type of photography is portraiture.

"It's never, for me, just about the action," she said. "I really want to see (the people's) story and how they live."

While acknowledging that the trip wasn't without its challenges (her rudimentary Russian was definitely helpful), Jeskova said that she would encourage people to visit Azerbaijan, saying that she felt safe the entire trip, and adding that the country boasts a fascinating culture (as well as great food).

Many of the challenges the couple faced were related to the fact that they were mountain biking, Jeskova added. "If you want to go hiking or something like that, there are lots of organized tours," she said.

For Storey, the mountain biking was an incredible treat and merits exploration. What he found in the Candy Cane Mountains was the "kind of riding I dream of," he said.